The title of this article is ambiguous. Further meanings are listed under parsley (disambiguation) .

The parsley ( Petroselinum crispum ), in Austria and Altbayern also the parsley , other names Peterle or Peterli , Peterling , Petergrün or Silk (formerly also rock silge and stone lobster ), is a plant species from the genus Petroselinum within the umbelliferae family (Apiaceae) . It occurs wild in the Mediterranean area. In Europe and the entire Mediterranean region, the leaves of their cultivated forms, either smooth or curly, depending on the variety, are among the most common culinary herbs ; the particularly large storage root of the variety or subspecies root parsley ( Petroselinum crispum subsp. tuberosum ) serves as a component of soup greens . 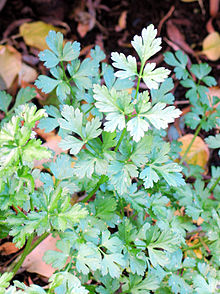 The parsley is a biennial herbaceous plant . It has a more or less beet-shaped root . From this arise usually several bald stems that are upright, stem -round to slightly grooved, and often tubular. All parts of the plant are bare. The parsley reaches stature heights of 30 to 90, rarely up to 100 centimeters.

The basal leaves and lower stem leaves are stalked, above the leaves with wide, white, hautrandigen are sheaths on the stem sitting . The leaves are dark green. The lowest are double to triple pinnate . The tips are wedge-shaped to broadly ovate, pinnate or lobed in outline. They have a cartilaginous tip and are one to two centimeters long. In cultivated forms, the leaves are smooth or curly. The curly shapes are again divided into 3 groups in production and seed trade: Coarse to medium-fine curled (curled = type perlé = pearled), Paramount type, fine to very finely curled (extra curled = double / triple curled), moss curled type and fern leafed ones Parsley (fern leafed). The strength of the leaf curl is rated on a scale from 1–9 as low to very strong.

The double-gold inflorescence has a long stalk and 8 to 20 rays. The umbel rays are all about the same length. The one to three bracts are lanceolate to subpulate. The six to eight bracts are linear to sub-like and around half as long as the flower stalks. The petals are greenish yellow, often reddish and about 0.6 millimeters long.

The survival buds are on the surface of the earth and these plants are usually covered by snow, leaves or earth as weather protection (" hemicryptophyte "). The hermaphroditic flowers are proterandric and are pollinated by insects ( diptera , hymenoptera ).

According to R. Hand, Petroselinum crispum is originally found only in Morocco , Algeria , Tunisia and Jordan within the Mediterranean region . In Spain, Portugal, the Balearic Islands, Denmark and Sweden it is a neophyte .

In Central Europe they are grown in gardens; very rarely does it go wild. It thrives best on fresh, nutrient-rich clay soils .

Leaves and roots have the same ingredients: The main components of the essential oil are myristicin , limonene and 1,3,8-p-menthatriene . Other mono- and sesqui terpenes also occur in smaller quantities . At around 160 milligrams per 100 grams, parsley contains a comparatively high amount of vitamin C (e.g. citrus fruits).

In the case of fruits, either myristicin prevails with 60 to 80% or - in the case of flat- leaf parsley - Apiol . There is also a chemical breed with tetramethoxyallylbenzene as the main component of the essential oil.

The parsley gave its name to the fatty acid " petroselinic acid ", an isomer of oleic acid, which occurs in the seeds or fruits of umbellifers .

In addition to the essential oil, the parsley contains very small amounts of polyine and the furanocoumarins bergapten and isoimperatorin in the roots .

The dried and ripe fruits are used as medicinal drugs: Petroselini fructus and the fresh whole plant, Petroselinum (HAB).

The essential oil of the parsley fruits causes a vigorous urine excretion mainly through the irritating effect of the phenylpropanes on the kidney parenchyma . In higher doses, however , the apiol causes increased contractility of the smooth muscles of the intestine, bladder and, above all, the uterus. The roots of parsley in particular contain large amounts of apiol. The effect of parsley stock on the uterus was already used in gynecology and obstetrics in the Middle Ages. It was used for menstrual cramps, a missed menstrual period and for abortion. Pregnant women should especially avoid parsley oil as it is abortive . In the Middle Ages, parsley was widely used for abortion . Cases are also known from modern times. From 1989 the case of a 36-year-old woman from Corleone is documented who died while attempting an abortion with a parsley brew. Cooked parsley is considered an old home remedy for abortions in southern Italy.

There are two clans, mostly listed as varieties or subspecies:

Parsley was considered a sacred plant in ancient Greece , but not clearly distinguished from celery . In the Odyssey it is seen as an ornament of the island of the nymph Calypso . Parsley wreaths were given to the winners of the Isthmian and Nemean Games . The oldest written mention is on a document in Mycenaean-Greek linear script B as se-ri (li *) - no , in ancient times the petro- for "stone" became the name Petroselinon (as much as stone celery, stone lettuce, stone lettuce , Felsensilge).
* {The linear script B does not differentiate between the liquid consonants L and R}

Dioscurides , one of the most famous doctors of antiquity and the first author of a monograph on more than 1000 plants with their pharmaceutical properties, valued the therapeutic effectiveness of parsley against kidney and bladder problems, flatulence and as a menstrual aid. He mentioned Macedonia as the place of growth , so that the plant was also known as Petroselinon to makedonikon (Latin Petroselinum macedonicum , also Petroselinum macedonium : "Macedonian parsley" - which could also be the plant Athamanta macedonica Spr. ). In the West, the first name remained Petroselinum , later Petrosilium , which led to the German word parsley , the French Persil and the English Parsley . In the Balkans, the second, geographical term survived. B. in the Bulgarian language as "Magdanos" (bg. Магданоз) and in the Turkish as "Maydanoz". As reborrowing it returned Greek language as "Maintanos" (Μαϊντανός) in the (re). Based on the ancient name, however, the parsley is known there, especially in northern Greece, as "Makedonisi" (Μακεδονήσι).

In Central Europe it was not until the Middle Ages that the plant was first grown as a medicinal herb in monasteries and then used in the kitchen. To avoid confusion with the poisonous but similar looking dog parsley , varieties with curly leaves were bred. In the 19th century, the term "parsley herb" was also used.

According to Madaus , ancient authors don't always separate parsley from other umbelliferae, especially celery . In Dioscurides she urinates and menstruates, similar to Galen and the Hippocrats. According to Albertus Magnus , it also promotes urinary excretion and digestion. Cazin reports a cure from anasarca after puerperal fever. Paracelsus , Matthiolus and Lonicerus call them urinary and stone-inducing, flatulence, digestive and menstrual promoting, accelerating birth, memory-enhancing, blood-purifying, skin-smoothing. Others took it for gonorrhea . The plant has always played a major role in the magical-therapeutic thinking of the Germanic and Romanic countries. The saying “Parsley helps men on horseback, women underground!” Probably means their aphrodisiac and abortive effect. Folk medicine used herbs and roots and the like. a. for urine gravel, kidney and bladder stones, spleen and liver problems, jaundice, circulatory disorders, dropsy, digestive and bladder weakness, chest pain, congestion in the chest, stomach and kidneys, flatulence, the "seeds" also with fever, uterine disease, swollen thyroid, chronic Cough and lack of menstruation, the fresh juice ( Sucus petrosilini ) for mosquito bites. Parsley kills parrots and smaller animals, the fruit is good as a wormer for dogs. According to Kneipp , parsley is very effective for dropsy. The Kneipp successors Eckstein and Flamm also found a slight stimulation of digestion and menstruation and recommended it for water in the legs, in the abdominal and chest cavities or in the pericardium, also otherwise with poor kidney function, where there are non-inflammatory processes. The homeopathy uses Petroselinum rare in urinary retention and sudden urge to urinate, urticaria, night blindness or singing in the ears.

The leaves of parsley are usually used raw or only briefly heated as a herb, otherwise they lose their typical aroma, and are an integral part of various Mediterranean cuisines . As a component of bouquet garni in French cuisine , parsley is not only cooked briefly, but already added at the beginning of the cooking time, it then gives broths and sauces a spicy basic taste. Parsley is also often found in the cuisine of Western Asia , for example in Turkish cuisine almost all cold dishes and roasted meat are garnished with chopped parsley. In tabbouleh , a salad from Lebanese cuisine , parsley is the main ingredient alongside mint and wheat semolina . Parsley is also widely used in the Caucasus , the Arabian Peninsula and Iran . Parsley is a component of the green sauce , both according to the Frankfurt and Kassel recipe, a typical dish of German regional cuisine that is particularly popular in the Hessian region. Parsley is also made into soup by boiling it in vegetable broth and mashing it.