The family contains about 434 genera with about 3780 species , and is represented worldwide in the temperate zones . The umbelliferae include many aromatic plants and food plants , but also some very poisonous plant species, for example the water hemlock and the spotted hemlock .

The representatives of the umbelliferae are almost exclusively perennial herbaceous plants. A few taxa, such as in the subfamily Mackinlayoideae, are lignified . The stem axis is usually hollow and nodular . The stature heights range from several meter high plants in the steppes of Central Asia ( Ferula ) to a few centimeter high cushion plants in the Antarctic ( Azorella ).

The alternate leaves are single or multiple pinnate . Only in exceptional cases do they have simple leaves ( bupleurum ). The leaves have a leaf sheath .

The inflorescence is usually a multi-rayed double umbel , an umbel made of usually many umbel . This structure of the inflorescences is very characteristic of the umbelliferae and has also given them their old scientific name Umbelliferae (umbrella carrier).

The bracts of the umbels are tightly packed together and form the envelope (involucre), they are often only weakly developed or absent. This is where the dome stalks originate = umbel rays. The umbellules are in turn surrounded by a (often missing) envelope (involucellum). The flower stalks are not called "dome rays". Often the inflorescence forms a dome or even an area on which insects can often be found.

Simple umbels are less common. There are also species with single flowers ( Azorella ). In the case of very large species, several double umbels can be combined to form an even larger inflorescence ( giant hogweed , Heracleum mantegazzianum ).

With the exception of the gynoeceum, the mostly inconspicuous flowers are five-fold and usually radially symmetrical . In some species, however, the marginal florets in particular are asymmetrical and therefore zygomorphic . There are originally five sepals , but they are often stunted or absent. The five petals are free and are mostly white, more rarely yellow, pink to purple. The petals often have a knocked-in lobule (lobulum inflexum) at the tip. Its shape as well as the shape of the front edge of the petal (flexure edge) are important determinants.

There is only one circle with five free, fertile stamens that are curved in the bud. Two carpels have become an under constant ovary grown. The two styluses (also known as beak) sit on a disc-shaped to conical, shiny, stylus cushion (Stylopodium). This serves as a nectarium , i.e. i.e., it excretes nectar . In each of the two ovary compartments there is a hanging anatropic ovule . A second withers away very early.

The structure of the flower can be summarized in the following flower formula :

The flowers are mostly protandric . The pollination is usually about flies , beetles and other insects kurzrüsselige ( Entomophilie ). 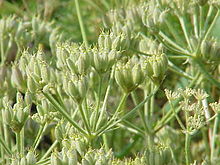 The fruit is a dry, two-part split fruit , also known as a double achene. The shape is often cylindrical with a round to elliptical cross-section. Spherical ( Coriandrum ) and double- spherical shapes ( Bifora ) are rarer . The two partial fruits (mericarpies or carpids) initially remain with the upper side on a fruit holder ( carpophor ), which is located in the middle.

Each partial fruit has five longitudinal ribs or main ribs (juga primaria) each with a vascular bundle on its free side. In between there are valleys (valleculae), in each of the walls of which there is a mostly dark schizogenic oil duct (here called oil streak) (caused by the divergence of cells). In some species, each valley has a secondary rib (jugum secundarium, for example the carrot with prickly secondary ribs). The oil ducts can also be increased ( Pimpinella ) or reduced ( Coriandrum ) or completely absent ( Conium ).

The seed consists of a very small embryo in a large, fat and protein-rich endosperm . The embryo lies at the top of the seed with the hypocotyl pointing upwards . The seed coat is glued to the pericarp.

The spread occurs through animals (epi zoochory ), the wind ( anemochory ), water ( hydrochory ), through self- propagation ( autochory ) and partly through humans ( hemerochory ).

The umbelliferae are the family with the largest range of coumarin compounds. In addition to simple coumarins and hydroxycoumarins (e.g. umbelliferone ), there are also a large number of prenylated, geranylated and farnesylated coumarin derivatives. This also includes the furano and pyranocoumarins. The former can be linear or angular. Hydroxy and furanocoumarins have a deterrent effect on herbivores (deterrent), as phytoalexins and as germination inhibitors. The toxicity increases from hydroxy to linear to angular furanocoumarins. The furanocoumarins are phototoxic : when exposed to UV light, the DNA is inactivated (photosensitization). Angular furanocoumarins are more toxic than linear ones, although their phototoxicity is less. Most of the species-rich genera of the family, which are widespread in the Holarctic, contain furanocoumarins ( e.g. Bupleurum and Pimpinella with 150 species each), while many monotypical genera with limited geographical distribution do not contain furanocoumarins.

Sesquiterpene lactones are found in the family with over 100 compounds. The same basic structures (e.g. germacranolide, eudesmanolide, eremophilanolide and elemanolide) occur as in the sunflower plants, but they are stereochemically different. They are also more frequently hydroxylated and esterified, especially at C11.

Over 150 polyacetylene compounds have been detected in the umbelliferous plants . The most common are the C 17 diyne dienes of the falcarinol group. The toxicity of the water hemlock ( Cicuta virosa ) and the saffron vine umbels ( Oenanthe crocata ) is based on polyacetylenes.

The presence of petroselinic acid as the main fatty acid testifies to the close connection between the Apiaceae and the Araliaceae .

Carrot ( Daucus carota ) and parsnip ( Pastinaca sativa ), which are mainly grown for their carbohydrate content, are a certain exception .

Some species are very poisonous. The spotted hemlock ( Conium maculatum ) provided the poison for Socrates, who was sentenced to death . The water hemlock ( Cicuta virosa ) is also very poisonous . Dog parsley ( Aethusa cynapium ) is less poisonous , but it is often confused with parsley , which often leads to poisoning.

Many species are photosensitizing and phototoxic due to their furanocoumarins . The giant hogweed ( Heracleum mantegazzianum ) is particularly worth mentioning here . However, the psoralen contained in the phototoxic species is used in medicine as part of PUVA therapy for the treatment of skin diseases.

The family is distributed worldwide, but the main focus is in the northern temperate zones . In the tropics , umbelliferae are particularly widespread in the montane altitudes . The umbelliferae grow mainly in steppes, swamps, meadows and forests. 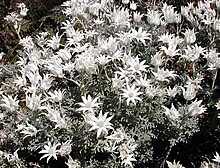 The sister taxon of the umbelliferae within the order Apiales is the group of Pittosporaceae , Araliaceae and Myodocarpaceae . The family contains about 434 genera with about 3780 species . Since 2010 it has only been divided into three subfamilies. 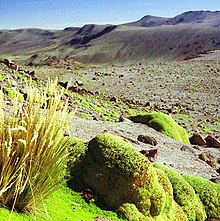 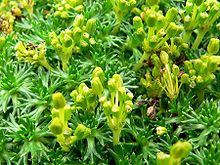 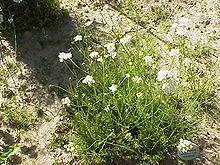