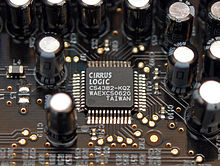 Integrated DAU with 8 channels on one audio card

Possible output signals through the given digital sampling points

An analog-to-digital converter generates a stepped signal from a continuous set of values. A digital-to-analog converter cannot generate a continuous signal again from the stepped signal. The graduation in steps of 1 LSB (least significant bit) that has occurred once  cannot be reversed. In the case of a sequence of variable values, however, the gradation is smoothed out by a necessary filtering.

A digital signal is a time-discrete and value-discrete signal, as shown on the right. The digital-to-analog converter converts the quantized information , which is available as binary information, into a signal that can be continuously provided to a device that operates using analog technology.

An approximation of a continuous original signal, on which a digital signal can be based, is achieved with a reconstruction filter that usually follows the digital-to-analog converter directly . This is of great importance in audio technology, for example.

When converted into a time-continuous (but still value-discrete) signal, the signal value is held in an input register until the next sampling point. In the case of individual measuring points and slowly changing variables, a course as shown in the second picture as horizontal lines is created at the output.

Given a rapid sequence of points with different signal values, a wide variety of courses are possible due to the sampling points for the resulting analog (that is, also value-continuous) signal. The dotted line in the second image follows the sample values, but does not resemble the original signal. It contains higher frequency components, which usually have to be prevented by anti-aliasing filters on the analog side. In this case, the storage of the sampling points is handled by the filter.

Spectrum of a harmonic at the output of a DAC

As a result of the quantization levels , the spectrum has distortions which are caused by the red-dashed and enveloping amount curve of the sinc function . This leads to a distortion and reduction of the amplitudes even below half the sampling frequency, i.e. in the desired frequency range. These linear distortions are usually compensated for on the digital side by additional filters, shown in blue dotted lines in the image. In this case, higher frequency components below half the sampling frequency are increased more, inversely to the sinc function curve.

If the signal frequency is significantly lower than the cut-off frequency of the filter, the curve of the output signal approaches the stepped curve. The gradation is noticeable as quantization noise .

Since the digital signal fed to the DAC is dimensionless, it must be multiplied by a predetermined value U ref . There are basically two options here.

In the case of an ideal digital-to-analog converter, there is preferably a linear relationship between input and output variables. There are

other codings, for example two's complement , BCD code, can also be used.

There are also D / A converters with a non-linear quantization characteristic z. B. according to the logarithmic A-law - and µ-law - procedure for telephone networks .

In addition to the quantization error, there are other errors to be considered. 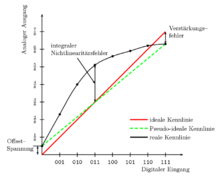 Characteristic curve of a DAU and its possible errors

The following errors are defined as deviations in the characteristic curves between the real and ideal converter (see figure):

The gain error is often given as a fraction of the current value, the zero point error together with the quantization error and the non-linearity error as fractions of the final value or as a multiple of an LSB.

Error in the graduation

Deviations in the grading
a) if a grade is unequal,
b) the same if a higher grade

Individual levels can vary in height.

If the input variable increases step by step, depending on the implementation method, a value of the output variable may decrease, especially if there is a carry over several binary digits, for example from 0111 1111 to 1000 0000. In this case, the converter is not monotonic .

Temporal fluctuations in the clock cycle ( jitter ) affect the construction of the output signal. For details on the maximum allowed jitter see under the same heading in the article ADU .

Here the output signal is generated by as many resistors in a voltage divider as there are stages; every resistance is weighted equally. The assigned level is selected with the digital value via a 1-out-of- n switch ( multiplexer ). This process is fast and guaranteed monotonous, but comparatively complex with increasing resolution. An example of the method is an 8-bit converter with 256 resistors and 272 switches.

Here the output signal is generated by as many resistors as there are binary digits ; each resistance is weighted according to the value of the assigned position.

The R2R network is easier to manufacture and implement, as it halves an electric current in a chain of current dividers (only possible with dual code).

You need as many switches as there are bits used to represent the digital values. Depending on the value (1 or 0) of the associated binary digit, the differently weighted currents are switched to a common line or diverted unused. The sum of the connected currents is - today mostly integrated in the circuit - converted into a voltage by means of an operational amplifier . The parallel method offers a good compromise between effort and implementation time and is often used.

Here the output signal is generated by as many time steps as there are steps. The digital value defines the switch-on time of a single switch and, with periodic repetition, the duty cycle in a pulse duration modulation . The final output signal is the equivalent of a voltage switched on / off in this way. This method, which can be implemented easily and inexpensively, requires the greatest implementation time of the methods presented here, because the method is associated with a counting of time steps and with averaging. This guaranteed monotonous DAC can be easily implemented as an integrated circuit and is particularly common in microprocessors in connection with the clock signal. A simple low pass can usually be used for averaging .

The delta modulation , which some here similarities to the PWM does is, in the delta-sigma modulation used. Similar to the counting process, one or more 1-bit converters are used to reduce the output errors through additional continuous subtraction and integration, and noise shaping is achieved which shifts the noise to higher frequency ranges. A certain amount of digital computation is required for sampling frequency conversion and digital filtering. Higher order delta-sigma modulators with high oversampling are used for good results, e.g. B. 5th order and 64-fold oversampling. This method requires little filtering effort due to high oversampling, can be easily integrated, offers high accuracy and is guaranteed to be monotonic when a 1-bit converter is used. The main advantage compared to the counting method is the principle-related noise shaping, which enables higher frequencies. This method is increasingly used today not only in audio, but also in measurement technology .

This is not a stand-alone procedure; instead, combinations of the above procedures are used. The high-precision delta-sigma method is used e.g. B. combined with a simple, low-resolution parallel converter for the low-order bits in order to combine the advantages of both methods.

For very fast DAU, an architecture with several parallel DAU cores is used (interleaved DAC). The analog output signals of the individual DACs are combined by means of a high-frequency circuit in order to achieve a combined output signal with a higher sampling rate. The signals can be put together in the time domain as well as in the frequency domain.

The input signals are mostly electrical voltages with a standardized representation of the two signal states, for example TTL , ECL , CMOS , LVDS .

In order to signal the validity of the pending data or to further configure the block, additional control lines are required. In the case of converters driven in series, the input register must be written to in a number of cycles before the information is available for conversion.

The generated signal is at the output either as

to disposal. The unfavorable impedance and capacitance of the converter circuit almost always requires further processing of the signal. An amplification circuit used for this purpose has a significant influence on the dynamic properties of the overall circuit (e.g. bandwidth ) due to its limiting parameters .

Nowadays audio signals are usually stored in digital form (e.g. as WAVE or MP3 ). In order to be able to make them audible over loudspeakers, they must be converted into analog signals. DAUs can therefore be found in CD and digital music players as well as PC sound cards . DAUs are also available as individual devices for mobile applications or as components in stereo systems.

Digitally generated video signals (e.g. from a computer) must be converted before they can be displayed on an analog monitor. A memory ( RAM ) is usually attached to the DAU , in which tables for gamma correction , contrast and brightness setting are stored. Such a circuit is called a RAMDAC .

In many technical devices, electromechanical or electrochemical actuators are controlled with digitally calculated values, which are implemented by a DAU. DAUs are also used in battery chargers and digitally adjustable power packs.

The DAU can also multiply a variable, analog reference value with the digital input signal. One area of ​​application is the digital potentiometer , which can be controlled digitally as an adjustable resistor (e.g. for volume control in audio amplifiers or television sets ). Digital potentiometers with EEPROM memory remember the last set value, even if the device was disconnected from the mains voltage.