The Electromechanics is a branch of electrical engineering , which deals mainly with the production of mechanical operations using electric drives. These mechanical processes can encompass all orders of magnitude from the adjustment of a pointer to a motor drive, as well as numerous applications from computer science to large-scale energy technology.

Electromechanical components and their application 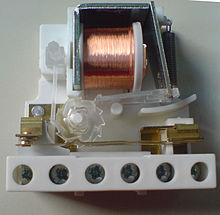 Classic components of electromechanics are primarily the switch , the relay , the electromagnet and the electric motor .

Classic examples of the application of electromechanics are electrical measuring devices with mechanical display parts, rotary selectors such as B. the rotary dial in the early telecommunications exchanges or the calculating machines Zuse Z1 to Zuse Z22 or Z23 developed by Konrad Zuse .

Modern applications are e.g. B. telescopic drives or actuators of the linear motion , as the actuator can be used for valve control, or from which a complete example Hexapod can be constructed. Even speakers are among the electromechanical transducers.

An electrical mechanic as a craftsman was thus an all-round specialist in the field of electrical engineering. However, the field of activity of electromechanics was increasingly narrowed down by the conversion of control, information and energy systems to purely electrical or " electronically " acting processes. As a result, job-specific training as an electrical mechanic in Germany has no longer been possible since August 1, 2003. It was replaced by the training