A consideration in the 3-level model is suitable as a contemporary illustration of the classification of IT in higher-level systems. It shows connected technical systems and their benefits for individual users or for processes in organizations: 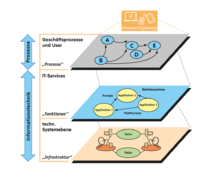 Another view of IT, the view of the services offered by IT, is offered by the SOA ( service-oriented architecture ) concept.

Today, a distinction is made between four areas:

“A common name in the field of industrial IT is the technical term Operational Technology (OT), which tries to describe all interacting components in complex and dependent systems. These components are mostly controlled and monitored in a highly integrated manner using SCADA systems. "

Information technology is closely related to technical informatics , which among other things deals with switching networks and plants as well as the structure and organization of computers . But the (hardware) aspects of output and input devices, so classic and future human-machine interfaces ( human-computer interfaces ) belong to this area.

Developments in IT have changed many areas of life in recent decades, so in addition to the economy and the science . The research and development of human-computer interaction has also become increasingly relevant.

Due to the widespread use of IT, it also has a significant impact on the earth's ecosystem through its resource consumption. Sustainable and environmentally friendly IT is called green IT .

Information technology is used by companies , administrations , associations , private and other users. Security is very important for a smooth process. Without protection mechanisms, hackers , crackers or scriptkiddies can disrupt or damage the infrastructure through malware or other manipulations such as overloading. The attacks can be prevented by using protective software and other preventive measures.

The growth in global digital technology capacity was quantified in three distinguishable groups:

Information technology is also a recognized teaching occupation in Austria. The training is divided into two separate areas of computer science and technology right from the start, but the apprenticeship period remains the same at 4 years. While the main focus of IT training is more about programming and adapting software, technology training is mostly hardware-specific.