Electromagnet on a crane for picking up scrap iron

An electromagnet consists of a coil in which a magnetic field is created as a result of an electric current .

In the coil there is usually an open iron core that guides and strengthens the magnetic field. The invention of the electromagnet was achieved by the Englishman William Sturgeon in 1826. The electromagnetic effect was first demonstrated in 1820 by the Danish physicist Hans Christian Ørsted .

A current-carrying conductor causes a magnetic field in its surroundings (discovery by Hans Christian Ørsted 1820).

If work is to be done, the magnetic field circuit must be ferromagnetic and inhomogeneous, that is, contain an interruption in the iron core, which is to be reduced by the work.

The Lenz's Law states in substance, that a force or movement is directed so as to its cause - in this case, the current flow - counteracts. As a result, a magnetic circuit around a coil with current through it strives to reduce its magnetic resistance and also to close air gaps: This increases the inductance and a voltage is induced in the coil that has the same polarity as the supply voltage - the current decreases during moving the iron parts of the magnetic circuit towards each other.

Iron parts of the magnetic circuit consist of a yoke (fixed part) and moving parts such as tie rods, hinged armatures or iron parts to be transported (magnetic crane).

or the magnetic flux density B {unit of measurement: T ( Tesla )} to

Here μ 0 is the magnetic field constant and μ r is the relative permeability of the space enclosed by the coil. By definition, μ r = 1 in a vacuum , and the value of μ r is also very close to one in air ; in ferromagnetic materials, however, μ r can assume values ​​between 4 and 15,000 until the material-dependent magnetic saturation is reached. 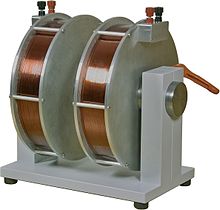 Electromagnet with variable air gap for experimental applications, with which magnetic flux densities of up to 2 Tesla can be generated.

They are used for actuation (pull, pressure and hinged armature magnets), as a coupling or for transport. They differ in the anchor shape:

Magnets operated with DC voltage have a strongly non-linear force-displacement characteristic when the armature approaches the yoke. When they both touch, the force is greatest. With the distance it sinks almost hyperbolically . The cause is the increasing magnetic flux density as the air gap decreases . The low force at the beginning of the tightening makes them unsuitable for applications that require a great deal of force immediately. The ways out are:

It is different with alternating voltage : Here the reduced inductance with a large air gap causes an increased current flow when tightening. AC pull magnets (or also relay and contactor coils ) therefore have a great deal of force at the beginning of their attraction.

In order to maintain the force of alternating current pull magnets during the current zero crossings, short-circuit windings are used as in a shaded-pole motor - these create a phase-shifted magnetic field in part of the magnetic circuit. Another possibility are three-phase pull magnets, but these require three separate legs of the yoke and armature.

When the current is switched off, self-induction can cause overvoltages, which in turn cause sparks or arcs . These can destroy the switch. As a remedy are in direct current protection diodes , with alternating current varistors and discretely antiserially connected zener diodes (or integrated power suppressor ), and - - or in combination with Boucherotgliedern used.

Electromechanical relays are usually constructed with a hinged armature mechanism that actuates the contact or contacts via a lever. Relays are built with DC or AC coils. A contactor mostly uses plunger electromagnets for direct or alternating current. The attraction forces to make the contact are much greater than with relays, which is why the electromagnets are larger than with relays. 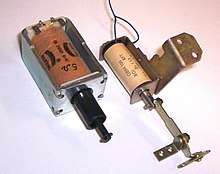 Moving coils can also be built into pull and push magnets. A common English term is also voice coil , because microphones or speakers are built with it. Either there is also a parallel guide or the user himself has to guarantee that the coil is guided in the permanent magnet through the design. With moving coil magnets , as with electrodynamic loudspeakers, a coil ( cylinder coil ) moves in the air gap of a permanent magnet due to the Lorentz force . Compared to the designs described above, they have an almost linear force / displacement characteristic (depending on the non-linear boundary conditions of the technical implementation). The moving mass is low, so the dynamics are high. However, the achievable force per mass is lower.

In contactors , greater forces are required to close the contacts than in relays, which is why electromagnets are used for this, which pull an iron core into the fixed coil. These are built for both direct and alternating current operation.

Electromagnets with and without a yoke, but without a moving armature or the like, are usually not referred to as electromagnets. Relevant terms are solenoid ( cylinder coil ), Helmholtz coil , deflection magnet , dipole magnet .

Disc winding made of a 16 T magnet for 20 kA, approx. 40 cm diameter, with a point of breakdown from a crash

High flux densities, even without superconductivity, can be achieved using magnets in which each coil turn consists of a slotted disc made of copper . Iron cores cannot be used because they were saturated at 2 Tesla. The central hole is used to hold the sample. The next plate is electrically separated by an intermediate insulating layer and thus forms the next turn. The bores made radially on the outside (picture on the right) are used to accommodate assembly bolts; in addition, many small bores are distributed over the surface, through which coolant flows. Because of the shorter current path on the smaller circumference inside, higher electrical current densities occur there, so there are more holes per area than outside. The plates are put together to form a stack of plates that is roughly the same height as it is wide. Such magnets are also called Bitter Magnet , the Bitter disk . They were invented in 1933 by the American physicist Francis Bitter .

Such magnets are used to hold the flux density records for artificial continuous magnetic fields. This is 37.5 T in the High Field Magnet Laboratory (HFML) in Nijmegen (32 mm bore). Such flux densities cannot be achieved with superconducting magnets - the transition temperature drops with the field and the superconductivity breaks down at the critical field strength . However, combined systems are in operation (hybrid magnets) in which a bitter magnet is placed inside a superconducting magnet. In the National High Magnetic Field Laboratory in Florida / USA, currently 45 T, the strongest artificial continuous field in the world is achieved. For this purpose, there is a 33.5 Tesla disc magnet coil (32 mm bore) in a 11.5 Tesla superconducting magnet. The power requirement is 30 MW.

In pulse operation, thanks to the heat capacity of the coil material, high flux densities can be achieved for a short time without the heat output having to be cooled down immediately ( integral of the current heat over time). Such coils must be mechanically stabilized for mechanical stability. To serve u. a. Fiber composite materials, coil wires made of high-strength materials such as copper-clad steel or beryllium bronze as well as outer bandages made of steel strip. The current pulses are provided by capacitors . The pulse durations result from the heat capacity and the strength and amount to a few milliseconds. See also Gauss rifle .

Such reusable pulse magnet coils, cooled down with liquid nitrogen, can be implemented for high field examinations up to about 100 Tesla and are developed and tested at the Institute High Field Magnetic Laboratory in Dresden .

Pulse magnetic coils are also used for magnet forming , among other things . Here, however, the fields are damped oscillations with frequencies in the two-digit kHz range, the pulse durations are less than 100 µs.

In experiments with magnetic flux densities of a few thousand Tesla for scientific purposes, it is often accepted that the coils are mechanically or thermally destroyed with each attempt. An additional increase in the flux density can be achieved with simultaneous compression of the coil or the field by means of explosive charges; See also the flow compression generator or in the chapter on impulse technology from Sakharov , the inventor of the flow compression generator. 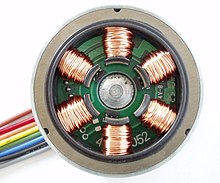 Stator windings of an electric motor

1. Coil with ferromagnetic core (mostly made of iron)