The fine beam tube demonstrates the effect of the Lorentz force on moving charges (electrons).

The Lorentz force is the force that a charge experiences in a magnetic or electric field. A magnetic field exerts a force on moving charges , while an electric field acts equally on moving and immobile charges. It is named after the Dutch mathematician and physicist Hendrik Antoon Lorentz .

The special theory of relativity provides an explanation of the Lorentz force, which is ultimately attributed to electrostatic attraction .

The form of the induction law in On physical lines of force (1861) or A dynamic theory of the electromagnetic field (1864) by James Clerk Maxwell contains, from today's perspective, a component that can be regarded as the forerunner of the Lorentz force. The actual treatment of the forces on moving point charges in magnetic fields did not take place until 1881 by JJ Thomson . It still had an incorrect prefactor , the correct form of the Lorentz force was derived from Oliver Heaviside (1889) and Lorentz (1895).

If an electric charge moves with speed through an electromagnetic field, the total Lorentz force acting on the charge is in the broader sense:

The resulting vector of a cross product is always perpendicular to both output vectors , and the scalar product of orthogonal vectors is equal to 0.This results in the case of a non-existent external electric field ( ):

This also applies to relativistic particles. In fact, however, the particles emit due to their distraction bremsstrahlung and thereby give energy.

On the other hand, if one considers, as is usual in older physics textbooks, only the magnetic component of the above total force as the Lorentz force in the narrower sense , then the following formula applies to its calculation:

The electrical component of the Lorentz force in the broader sense , which is also considered separately in such a case , is then called the Coulomb force and is calculated as follows:

The symbols and or and denote what corresponds to each other, whereby one or the other convention should be retained if possible for the sake of clarity of the spelling .

Formulation of the Lorentz force in the cgs system

In contrast to the above notation of the formula for the Lorentz force , which is based on the international system of measurements customary in electrical engineering and the experimental natural sciences , in theoretical physics, and more generally especially in England and the USA, one writes for the same force in the equivalent, but easily different cgs units

or for the Lorentz force in a broader sense

with the dimensional dielectric constant in a vacuum (for the systematic conversion of quantities in SI units into the cgs system and vice versa, see the corresponding section in the article on Maxwell's equations ).

The term "Lorentz force" is not used uniformly. Older textbooks usually differentiate between the Lorentz force in the narrower sense and the Coulomb force . The former is exerted by magnetic fields on moving charges, the latter by electric fields on moving or immobile charges. The more recent literature usually understands both forces as a magnetic component and an electrical component of the total force , the Lorentz force in the broader sense . 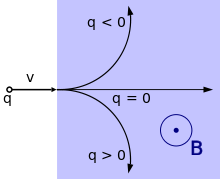 Movement of a point charge  q in a magnetic field perpendicular to its orbit (in this case out of the plane of the drawing): Negative charges (q <0) are shown upwards, positive (q> 0) downwards and neutral (q = 0) ) not distracted at all.

As moving point charges are small free charges such as electrons , protons or other charged elementary particles such. B. alpha particles , but also considered ions that are free in space, z. B. in a vacuum or in a saline solution .

The amount of the Lorentz force results from

If the point charge moves exactly perpendicular to the magnetic field, the following applies :

Lorentz force on the current-carrying conductor

The current balance measures the Lorentz force on the current-carrying conductor.

The Lorentz force is the central link between electricity and mechanics . If current flows through a conductor that is perpendicular or oblique to the field lines of a surrounding magnetic field, then a force can be determined on the conductor. The deflection in the ladder swing test or the measurements in the current balance experiment illustrate this. The force effect is derived from the Lorentz force acting on a moving point charge; this acts on the individual charge carriers in the conductor.

Lorentz force on the ladder

In order to computationally record the processes mentioned, for the sake of simplicity first consider a straight piece of wire of the directed length , which lies in a time-constant, homogeneous external magnetic field of the flux density . A current of strength that is constant over time flows through the wire , so that its conduction electrons move through the wire at a constant speed and the total charge during the running time

transport. Because of this, the sum of the Lorentz forces on all conduction electrons involved in the flow of current and thus on the piece of wire as a whole

The associated equation of absolute value then reads

If the wire runs exactly perpendicular to the magnetic field, and the equation is simplified to

For curved conductors, the force effect must be calculated by integration, in that the magnetic field is only viewed as constant for infinitesimally small pieces of the conductor. This results in the following formula:

If the two conductors are thin and parallel opposite each other like the opposite sides of a rectangle , then the simple formula for the amount of force of the forces acting on each other (according to the principle of interaction, equally large) results, already known from the Ampère definition :

The length of the conductors (the same for both conductors), their mutual distance and the current strengths in the two conductors.

Furthermore, the Lorentz force explains the conversion of mechanical movement into electrical voltage. The Lorentz force provides an alternative derivation of the electromagnetic induction instead of the change in flux.

For the sake of simplicity, consider again a straight piece of wire of length , which is now pushed at constant speed across a temporally constant, homogeneous external magnetic field of flux density running perpendicular to it, i.e. in such a way that the longitudinal direction of the wire is also perpendicular .

Shortening the total charge, which is completely insignificant here, and scalar multiplication with the vector of the directed conductor length ultimately yields the equation for the induction voltage sought :

If the three vectors are perpendicular to each other in pairs, as requested at the beginning, the late product l · (v × B) is simplified , so that the well-known formula 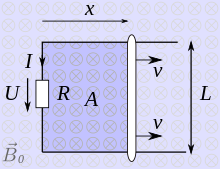 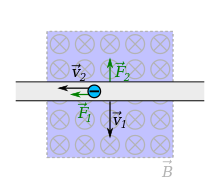 If both ends of the moving conductor are bridged with an ohmic resistance of the size R, which, on the other hand, is not moved against the magnetic field, a closed conductor loop is created over which the induction voltage can equalize, so that this and the product are the sum according to Kirchhoff's rule of meshes 0 deliver:

The current flowing through the closed circuit now generates a Lorentz force again, which counteracts the direction of movement. The Lorentz force not only explains the charge separation with which the induction voltage arises, but also the counterforce that is part of Lenz's rule.

Here, and are the scalar potential and the vector potential that lead to the electric field strength

and the magnetic flux density

The evaluation of the partial derivatives occurring in the Nabla operators yields:

The first term in the round brackets is the (kinetic) momentum (while the entire expression in the first round brackets describes the generalized momentum ) of a particle moving with speed :

The total time derivative of the vector potential, which is explicitly dependent on the time and on all spatial coordinates, is using the vector relation :

This gives the equation of motion as a function of E and B:

Historical definition of the unit of measurement amperes

From 1948 to 2019, the Lorentz force was the basis of the internationally valid definition of the SI base unit amperes :

One ampere is a small, "the strength of an unlimited fixed time electric current meters by two parallel in the distance of 1 in a vacuum arranged straight, infinitely long conductor having negligible circular cross-section flowing, electrodynamically the power of  N per m length of conductor between these conductors cause would."

The amount of the force results from Ampère's law of force for two straight, neighboring and thin line cables. For two conductors through which the current flows or with a mutual distance , the length-related magnetic Lorentz force is :

With a conductor spacing and a current of , the force of per meter of conductor length results from the above definition. The resulting force is attractive here; with opposing currents it would be repulsive.

Technical applications of the Lorentz force