The solar wind is a stream of charged particles that constantly flows away from the sun in all directions. Compared to the stellar wind of other fixed stars, it is relatively weak and must have been stronger with the primordial sun .

The solar wind is a main component of the interplanetary medium and appears as a low-energy component of cosmic rays . Unlike solar radiation, it is not electromagnetic radiation , but a particle flow. Occasionally the wrong term sun dust (analogous to stardust ) is used, which was particularly the case in the press coverage of the Genesis probe . The speed and density of the solar wind are very variable. It is made up of very different types of particle flows. Its most extreme form is coronal mass ejections (CME), which can also have massive consequences on Earth.

The solar wind consists mainly of ionized hydrogen ( protons and electrons ) and 8% helium- 4 atomic nuclei ( alpha particles ). It also contains traces of ionized atomic nuclei of the elements carbon , nitrogen , oxygen , neon , magnesium , silicon , sulfur and iron . There are hardly any non-ionized (electrically neutral) atoms . The solar wind represents a so-called plasma , which is electrically highly conductive . However, because of the low particle density , the interplanetary space has only a very low charge carrier density .

A distinction is made between slow and fast solar wind. These two differ not only in their speed, but also in their chemical composition, temperature and flow behavior. Although it originates from the outer layers of the sun , the solar wind does not exactly reflect the abundance of elements in these layers. Because through fractionation processes ( FIP effect ), some elements are enriched or diluted in the solar wind. In the interior of the sun, the abundance of elements has been changed by the nuclear fusion taking place there since its formation ; but since the outer sun layers are not mixed with the inner ones, their composition still corresponds to that of the primordial nebula from which the solar system was formed. Research into the solar wind is therefore also interesting in order to be able to draw conclusions about both the chemical composition and the isotope abundances of the primeval nebula.

The sun loses about a million tons of its mass per second due to the solar wind with only slight temporal variation. Outside the acceleration zone of 10 to 20 solar radii, the speed of the solar wind hardly changes, so that its density decreases with the square of the distance. Close to the earth, the solar wind has a density of about 5 · 10 6  particles per cubic meter.

Side view of the sun with an idealized dipole field at a sunspot minimum: the field lines of the solar magnetic field (blue) and the solar wind flow (red). The heliospheric current layer is dashed in yellow. 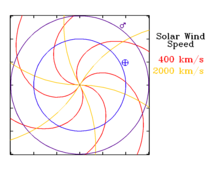 Top view: the different curvature of the spirals of the slow (red) and fast (yellow) solar wind. In blue the earth's orbit, in purple the orbit of Mars.

The plasma of the lower solar corona is rotated with the rotation of the sun. From a certain distance, around 2.5 solar radii (~ 2.5 · R ☉ ), the thermal pressure increases beyond the magnetic pressure and the plasma flows radially away from the sun from this point on. There are two types of solar wind, the slow and the fast .

The slow solar wind has a composition similar to the solar corona. As it flows away from the sun, it doubles its speed from 150 km / s at a distance of 5 · R ☉ to 300 km / s at a distance of 25 · R ☉ . Its origin has not yet been conclusively clarified. It is believed that observed drop-like plasma detachments from helmet streamers contribute to the slow solar wind. Most of the slow solar wind, however, is likely to come from regions outside of the helmet streamers , probably from the inner edges of coronal holes . It continues to accelerate as it flows away from the sun and, according to measurements by probes such as Ulysses, flows at a certain distance from the sun, especially near its equatorial plane, between about 20 ° north and 20 ° south. It takes 5 or more days, according to other sources about 20 days, to reach the region of the earth. Near the earth's orbit it has a speed of about 300 to 500 km / s and a temperature in the range of about 1.4 · 10 6  K to 1.6 · 10 6  K. The plasma sound speed near the earth's orbit is about 50 km / s, the solar wind is therefore clearly supersonic.

The fast solar wind has a composition similar to the photosphere of the sun. It emerges from the interior of coronal holes (i.e. predominantly, especially at times of the sunspot minimum , near the sun's poles), is remarkably accelerated between 1.5 R ☉ and 2.5 R ☉ and has in the center of the area, thus at 2 · R ☉ , a speed of 300 km / s. The oxygen ions are considerably faster than the lighter protons. The measurements by the Ultraviolet Coronal Spectrometer (UVCS) of the research satellite Solar and Heliospheric Observatory (SOHO) showed that the fast solar wind accelerates over the poles of the sun much faster than can be explained by thermodynamics. This theory predicts that the speed of sound should be exceeded about four solar radii above the photosphere. In fact, this limit is found at around 25% of this distance. Alfven waves are considered to be the cause of this acceleration . The fast solar wind accelerates further up to a distance of about 10 to 20 solar radii, from then on it flows away at approximately constant supersonic speed. The fast solar wind takes about 2 to 4 days to reach the region of the earth. Near the earth's orbit it has a speed of about 750 km / s and a temperature of about 8 · 10 5  K.

The solar wind flows radially away from the sun. Due to the rotation of the sun - one revolution in about 27 days, based on the earth - it forms spirally curved curves, similar to the water jet of a sprinkler . The fast solar wind forms steeper spiral lines than the slow solar wind (see adjacent figure). This creates pressure waves at the crossing points , consisting of a forward and a backward wave pair. These are called co-rotating interaction regions (CIRs). With the Voyager probes it was discovered that groups of these CIRs can in turn merge with one another, creating merged interaction regions (MIRs). These interactions typically occur up to around 10 AU. Beyond that there are complex structures, so that the solar wind is not a homogeneous flow even at great distances.

The solar wind flows away from the sun at supersonic speed and thins out with the square of the distance until its continuously decreasing pressure can no longer withstand the particles and fields of the local interstellar medium . At this point, known as the termination shock , the solar wind is abruptly slowed down from approx. 350 km / s to approx. 130 km / s, and thus to subsonic speed. In doing so, it condenses and heats up. The exact shape and size of the termination shock is variable, as it depends on fluctuations in the density of the solar wind as well as on fluctuations in the strength of the interstellar medium. The Voyager 1 and Voyager 2 space probes reached termination shock at 94 AU and 84 AU distances, respectively.

The magnetosphere shields the earth's surface from the charged particles of the solar wind. (not to scale) 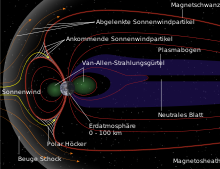 Entry of solar wind ions through the polar funnel

The comets provide a clearly visible sign of the existence of the solar wind : the action of the solar wind tears material out of a comet's coma . The bluish glowing gas tail of a comet always points in a straight line away from the sun, regardless of the direction of movement of the comet. The dust tail of a comet also points away from the sun, but since the dust particles are significantly slower than the gas ions, the dust tail is curved because of the comet's own motion and its angle to the sun is less than 180 degrees.

Coronal mass ejections and solar flares lead to enormous shock waves in the otherwise relatively continuous solar wind. Their effects in the near-earth area are known as space weather .

Strong solar winds also affect the propagation of electromagnetic waves and can interfere with shortwave radio and communication with satellites , among other things . Solar winds and their effects on technology have been around since z. B. 1847, 1859, 1921 and 1940, because there were disruptions in telegraphy, in railway signal systems, in radio communication and, in isolated cases, even in explosive scorching of transformers (a transformer failure occurred e.g. on 13. March 1989 arrived in Quebec). It is believed that particularly strong solar winds could lead to a total global failure of power supply and computer functions.

Within the heliosphere there is a layer in which the sun's magnetic field changes polarity. This creates electrical currents in the solar wind, which space probes could measure. This layer is irregularly shaped and is called the Heliospheric Current Layer .

As early as the Carrington event of 1859, the researcher Richard Carrington observed a connection between solar flares and temporally staggered terrestrial magnetic field storms, which - although inexplicable at the time - was an early indication of the existence of the solar wind. At the beginning of the 20th century, the Norwegian physicist Kristian Birkeland took the view that the polar lights were triggered by particle currents from the sun. However, his idea was just as little taken seriously as that of the German physicist Ludwig Biermann , who adopted a “solar particle radiation” in order to be able to explain the direction of the comet's tails . Astronomers noticed that the comet's tails were not pointing exactly away from the sun, but were at a small angle to it. Biermann explained this property in 1951 through the movement of the comet in a particle stream, which was also moving, a kind of lateral drift due to the current . E. N. Parker introduced the English term solar wind in 1959 and proposed a magnetohydrodynamic theory to describe the solar wind.

The existence of the solar wind could only be experimentally confirmed in 1959 by the Soviet Lunik 1 and in 1962 by the American space probe Mariner 2 on its way to Venus . Another milestone in the research of the solar wind were the solar wind sails , which were erected during the Apollo missions 11, 12 and 14 to 16 and provided data on the isotope abundances of the noble gases helium , neon and argon in the solar wind. Many other missions have contributed to understanding the solar wind. The space probes Pioneer 10 and 11 , Voyager 1 and 2 and the Ulysses mission provided data on solar winds from outside orbit, while Helios 1/2 and the Mariner and Pioneer missions to Venus and Russian Vega probes provided data from inside orbit . IMP 1–8, AIMP 1/2, ACE, ISEE 1–3 probes as well as the solar observatory SOHO and the space probe Wind delivered solar wind data near the earth. The Ulysses mission also provided data on the solar wind outside the ecliptic . In 2001 the Genesis mission was started, during which high-purity crystals in one of the Lagrange points (L1) of the Earth-Sun system were exposed to the solar wind and then brought back to Earth for investigation. The mission failed when it was completed in 2004 because the capsule containing the solar wind particles was not slowed down, but instead smashed on the ground. Voyager 1 hit termination shock in December 2004 and Voyager 2 in August 2007.

There are efforts to use the solar wind with the help of solar sails to propel spacecraft.