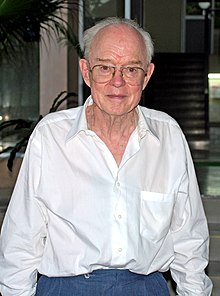 Parker graduated from Michigan State University (bachelor's degree in 1948) and received his PhD from Caltech in 1951 . He was then an instructor at the University of Utah and from 1953 research assistant to Walter Elsasser in Utah. In 1955 he became research assistant to John Alexander Simpson at the University of Chicago . In 1957 he became assistant professor there and in 1962 professor in the physics faculty and at the Enrico Fermi Institute . In 1967 he moved to the faculty for astronomy and astrophysics. In 1995 he retired.

In 1967 he became a member of the National Academy of Sciences ; In 1970 he was elected to the American Academy of Arts and Sciences .

His research mainly concerns the solar wind (Parker introduced this term), the magnetic fields of the earth and the sun and their complex interactions. In 1956 he was one of the developers of the reconnection theory, in 1959 he introduced the English term solar wind and proposed a magnetohydrodynamic theory to describe the solar wind.

The Parker spiral as the form of the heliospheric current layer and the space probe Parker Solar Probe are named after him.