The Astronomische Gesellschaft ( AG ), based in Hamburg, is one of the oldest astronomical associations in Europe. In 1863 it was entered in the register of associations.

In 1800,  the United Astronomical Society was founded in Lilienthal by two leading German astronomers, the Gotha observatory director Franz Xaver von Zach (1754–1832), to whom the first scientific journal called the monthly correspondence goes back, and Hieronymus Schröter (1745–1816) who operated an important lunar and planetary astronomy in Lilienthal in a private observatory. The Astronomical Society organized the second international congress for astronomy as early as 1800 and was the godfather of the " sky police " of 24 European observatories , which were supposed to organize the search for the suspected asteroids between the orbit of Mars and Jupiter. However, there is no direct organizational or personal connection between this and other predecessor organizations such as the Astronomical Society in Leipzig , which was founded in 1844, to today's AG. 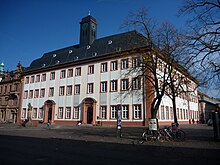 The old building of Heidelberg University : the place where the Astronomical Society was founded in 1863

The discovery of numerous small planets in the solar system from the 1850s onwards made standardization and coordination of the orbital calculations appear more and more urgent, and further attempts were made to coordinate cooperation among astronomers. The first agreement was made at the meeting of the Society of German Natural Scientists and Doctors in Bonn in 1857 . After a meeting in Berlin in September 1860 , another meeting took place in Dresden in August 1861 . Only nine astronomers showed up, so no agreement was reached. From August 27 to 29, 1863, Eduard Schönfeld , Karl Christian Bruhns and Wilhelm Foerster invited to a meeting in Heidelberg . It was here that the Astronomical Society was founded and its statutes were formulated. Julius Zech  from Tübingen was elected as the first chairman .

Around 1900 the AG initiated the most important star catalog of this time, the AGK . It was continued around 1930 as AGK2 with more recent astrometry data and taking precise account of its own movements , and as AGK3 it is an important database for astronomy , celestial mechanics and orbit determination to this day .

The AG saw itself from the beginning as an international organization, membership is not tied to any nationality according to the founding statute. Up to 1945 more than 50% of the members came from outside Germany, their share only decreased after the First World War, when German and Austrian scientists were internationally outlawed. The then chairman of the working group, Elis Strömgren from Copenhagen , tried hard to achieve reconciliation.

After the division of Germany, there were initially diverse connections between the two German states and also two assemblies in the GDR (1960 in Weimar and Jena and 1965 in Eisenach ), the politically motivated detachment of East German astronomy increasingly came about. In 1969/70 57 members in the GDR were forced to withdraw from the AG. In 1990 the board of directors of the AG decided to regard the membership of these astronomers as "dormant" and not as "expired", which meant that they could be resumed informally.

The working group has been  affiliated with the European Astronomical Society since 1995 .

The working group currently has around 800 members, mostly in German-speaking countries. It organizes a scientific conference at least once a year, which is usually connected with the general assembly, and publishes an annual report. Further focal points are public relations, the support of young astronomers and the promotion of astronomical school lessons. A working group deals with the history of astronomy.

The Astronomical Society awards the Karl-Schwarzschild-Medal , the Ludwig-Biermann-Förderpreis , the Bruno-H.-Bürgel-Preis , the Hans-Ludwig-Neumann-Preis , a doctoral award and the instrumentation award . Furthermore, the Hanno and Ruth Roelin Prize is traditionally awarded at the conference of the Astronomical Society . It also promotes school lessons, for example through a special prize in the Jugend forscht competition .

With date of appointment:

Other astronomical and scientific societies