The title of this article is ambiguous. Further meanings are listed under Lilienthal (disambiguation) .

Lilienthal ( Low German Leendaal or Lelendaal ) is a municipality in the district of Osterholz in Lower Saxony and borders directly on the city of Bremen .

The Wümme near Truperdeich before the construction of the bypass road, view from the bridge of the Jan-Reiners-Radwanderweg upstream to the bridge of Borgfelder Allee 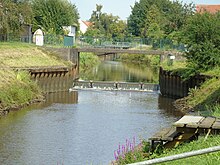 Lilienthal is located around eleven kilometers northeast of the center of Bremen , on the edge of the Teufelsmoor in Lower Saxony . The rivers Wörpe and Wümme with the Wümme cycle path flow through the municipality .

The community of Lilienthal consists of the following districts: (in brackets the population figures as of January 10, 2012)

The community of Lilienthal has a total area of ​​7,203 hectares, of which 5,689.3 hectares are used as agricultural land. Another 128.4 hectares are forest.

The south and west of the municipality along the Wümme belongs to the river marshes of the Unterweser , the north to the Teufelsmoor . Heidberg in the east is one of the foothills of the Achim-Verden Geest . There are also small Geestinseln in the wetlands, for example in Frankenburg and at the St. Juergens Church.

Below the core town of Lilienthal there is a salt dome that feeds the source of the Pannlake in Hollerland with its salt . 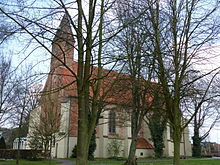 The Bishop of Bremen and first Hamburg Archbishop Ansgar (Archbishop) had a stone path chapel built in 865 on the small Geest hill of today's St. Juergens Church .

The development of the Sankt-Jürgensland in the west of today's municipal area by Dutch settlers ( Holler colonization ) began in 1106.

The place Lilienthal itself goes back to the establishment of the Lilienthal Monastery by the Archbishop of Bremen Gerhard II . Construction of the nunnery began in 1232 under the name Sancta Maria in Valle Liliorum ('St. Mary in the Valley of the Lilies'), which was affiliated to the Cistercian Order and consecrated in 1264. Mary with the child and the lilies as her symbol appear in the local coat of arms to this day. The monastery experienced its heyday around 1400.

According to the provisions of the Peace of Westphalia , the Archbishopric of Bremen and the former Hochstift Verden were secularized to duchies and subordinated to the Kingdom of Sweden , which ruled the land between the Weser and Elbe . Queen Christina of Sweden enfeoffed a well-deserved Swedish military leader, Landgrave Friedrich von Hessen-Eschwege , with the newly created rule Osterholz, in which the offices of Lilienthal and Osterholz were merged. After the early death of the landgrave, his wife Eleonore took over the government with its seat in Osterholz in 1655 and worked hard to improve the economic and sanitary situation of the rural population. After her death in 1692, the fiefdom reverted to the Swedish crown.

Lilienthal remained Swedish until 1712 - hence the Swedish colors of the coat of arms - when it came to Denmark and in 1719 under the rule of the Electorate of Braunschweig-Lüneburg . Lilienthal became the seat of a Hanoverian office. In 1740 the monastery complex was demolished.

In the second half of the 18th century, under the direction of the Hanover moor commissioner Jürgen Christian Findorff , several moor colonies were also established in the north of what is now the municipality of Lilienthal, Lüningsee (1763), Lüninghausen (1764), Westerwede (1764), Moorende (1778) and Mooringen (1778) and, after Findorff's death, Schrötersdorf (1805) and Neu Mooringen (1808).

In 1782 the bailiff Johann Hieronymus Schroeter moved into the court. In addition to the administrative work, the occupation with astronomy took up a large part of his time. He built an observatory in Lilienthal in the garden of his office building . In the years that followed, the Lilienthal observatory became the best-equipped observatory in the world. Among other things, there was a " giant telescope " with a 50 cm aperture and 8.25 m focal length. In its time it was the largest observatory on the European continent. Lilienthal achieved fame through the telescope and was visited by astronomers , high-ranking state officials and the military from numerous countries. Schroeter was in correspondence with many important astronomers of his time. Together with Heinrich Wilhelm Olbers and other scholars, he founded the Astronomical Society in Lilienthal on September 21, 1800 , the world's first astronomical association. After Schroeter's death in 1816, the observatory fell into disrepair. In 1850 the last remnants were torn down. Most of the instruments had previously been sent to the University of Göttingen . The novel fragment Lilienthal or the astronomers of Arno Schmidt alludes to this observatory. A functional replica of the 27-foot reflector telescope from 1793 has been standing at the entrance to the village across from the Borgfelder Landhaus since November 2015. Telescopium Lilienthal .

The liberation war of 1813 hit Lilienthal hard. After an incident during the retreat, a French unit set the entire village of Lilienthal on fire. Only the church, a few houses and the observatory were spared from the flames.

With the German War of 1866, the Kingdom of Hanover was annexed by Prussia . In 1885 the Prussian government united the Hanoverian offices of Lilienthal and Osterholz to form the Osterholz district.

In the further course the community grew steadily. In 1939 it had 3,100 inhabitants, in 1974 of which 12,500. By incorporating the neighboring villages in the same year, the population grew to almost 17,000. Today Lilienthal is characterized by new residential areas, whose residents are often attracted by the proximity to the city of Bremen and want to build a "house in the country".

From 1900 to 1956 Lilienthal was connected to Bremen by the Jan Reiners train .

On October 28, 2013, a bypass road with an elaborate new Wümmebrücke was put into operation in order to relieve the Lilienthaler Hauptstrasse from through traffic.

On August 1, 2014, the core town and Falkenberg were connected to the BSAG tram network.

The area of ​​today's municipality of Lilienthal has grown together through a series of historical dates: 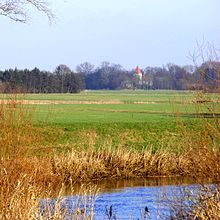 Sankt Juergensland: View from the Wümmedeich in Bremen to the St. Juergens Church

The denominations are divided into 56% Protestant, 7% Catholic and 37% non-religious, Muslims and others.

In 782 the area of ​​the lower Weser region was founded by St. Willehad , who later became Bishop of Bremen, did missionary work and chapels and churches were built in the region over the next few centuries. In 1232 a monastery was founded in Lilienthal and occupied by nuns of the Cistercian order . Until the Reformation , which took place in Lilienthal Abbey in 1604, pastoral care was provided by Osterholz and Scharmbeck, as well as by St.Jürgensland and in Trupe (both chapels still exist).

Evangelical parish "St. Marien ”with a branch church in the Trupe district.

The Truper Chapel can be found, romantically located under old oaks, in Lilienthal's oldest district, Trupe. Trupe was first mentioned in documents in 937, long before Lilienthal (1232).

Erected over a previous building from the time of Charlemagne (around 800), the Truper Chapel was first mentioned in 1283. It was probably built at the end of the 12th century. There are remarkable gravestones from the 18th and 19th centuries on the site of the chapel. In 1813 the chapel was burned down by the French and rebuilt six years later. Also worth seeing is the small Romanesque St. Juergens church in the district of the same name.

In 1823 a Catholic church was consecrated in Bremen after the Reformation (St. Johann). From 1862 until 1945 church services were held periodically in a private apartment in Lilienthal, the parish vicarie Hemelingen (Land) "evangelized". In 1946, the current parish of Guter Hirt started its work in today's borders, when the Worpswede parish vicarie was formed. Church services were celebrated regularly in Grasberg , Worpswede and Lilienthal, and on November 26, 1961, the church in Lilienthal was consecrated by the Bishop of Hildesheim . Since then, Lilienthal has been the center of the community, which has belonged to the Holy Family parish in Osterholz-Scharmbeck since 2012

The roots of the free church go back to the 1820s. Even before his time as a Baptist, Johann Gerhard Oncken evangelized alongside the Bremen revival preacher Friedrich Mallet in Lilienthal and the adjoining Teufelsmoor . From this missionary work, independent church-style house groups developed in Seebergen and Fischerhude, among others . After the first Baptist congregation was founded in Bremen in 1845, the Bremen preachers of this free church immediately followed up Oncken's missionary work and founded branch congregations of the Bremen free church in the Lilienthal area. After the Second World War , the evangelical free church community work experienced an upswing due to the influx of refugees. From 1990 to 1994, the parent community in Bremen dared a fresh start. In 1994, an older residential building at the Konventshof was acquired, which became a community center through additions and renovations. The Philippus congregation is today an independent Baptist congregation in the Federation of Evangelical Free Churches. It belongs to the national association of Baptists in the northwest .

At the end of 1945 families from the east came to Lilienthal with the stream of refugees. The first house groups were looked after by various preachers as a whole congregation. In 1951, an old barrack was rebuilt on the property at Am Schulhof 19a for the community (since 1970 eV). In 1954 the first pastor could be hired. In 1985 an extension was added to the parish hall. In 1995 the congregation changed its name to Christ Centrum OASIS e. V. In 1998 the building at Goebelstrasse 55–57 was purchased . The congregation is a member of the Bund Freikirchlicher Pfingstgemeinden ( KdöR ) and, as a regional congregation, a guest member of the Working Group of Christian Churches in Germany (ACK) in Lower Saxony.

In the municipal elections in Lower Saxony in 2016 , 15,496 eligible voters were called to vote, 59.76% took part, which means an increase of approx. 4%. In each of the 14 electoral districts, three votes could be distributed to lists or persons. The change compared to the last election: CDU + 13% p SPD + 5% p Greens −18% p lateral thinkers −8% p Left + 3% p. The newly established local branches of the Free Democratic Party and the National Democratic Party of Germany received 4.3% and 1.5%, respectively.

The first full-time mayor since 2004 was Willy Hollatz. In 2011 he was re-elected unopposed with 73.4 percent of the vote. In December 2015, he announced his resignation for 2016 for personal reasons. In September 2016, the turnout was 59.77% in the mayoral elections. Six candidates stood for election. In the second ballot, Kristian Willem Tangermann ( CDU) prevailed with 65.15% of the vote; the turnout was 43%.

The coat of arms shows the image of Mary of the Cistercian order with the depiction of Mary with baby Jesus and lilies, which can also be seen as a stone relief in the St. Mary's Church. 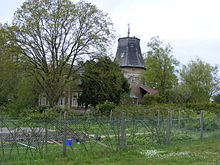 Stump of the Frankenburg windmill

Regionally and nationally known companies from Lilienthal include:

The Oberende wind farm was built by the Spanish company Gamesa and commissioned in 2009. The five wind turbines are of the Gamesa G 58 type and have a total height of 100 meters. The output of each system is given as 850 kW. All systems were sold to IKEA in 2010 .

In 2010, the surrounding citizens, who oppose the expansion of the wind farm and criticize the existing wind turbines, founded the interest group 5 are enough! . Above all, they complain about the noise development, the flashing light on the systems, the shadows cast and, in their opinion, the damage to the landscape that the systems would cause.

In local public transport , Lilienthal has been connected to the Bremen tram network since August 1, 2014 . The extension of tram line 4 from Bremen-Borgfeld to Lilienthal-Falkenberg was under construction from the end of February 2011 to June 2014. Due to the bankruptcy of the general contractor carrying out the construction, the planned completion was postponed from September 2013 to August 1, 2014. The regional buses of lines 630 and 670 of the VBN , which run from Bremen main station through the municipality of Lilienthal to Worpswede and Zeven , got with the opening of the Line 4 to Falkenberg a new route. With the start of regular operation of line 4, bus line 30 of the BSAG to Bremen- Borgfeld was discontinued.

A collective call taxi can be ordered in town and as a feeder to the buses .

An inner-city relief road has been completed since May 2010 and opened for public traffic.

Personalities associated with this church

Municipalities in the district of Osterholz