Sir Hubert von Herkomer (born May 26, 1849 in Waal , near Landsberg am Lech , Kaufbeuren district office , Kingdom of Bavaria as Hubert Herkomer ; † March 31, 1914 in Budleigh Salterton , Hampshire , United Kingdom ) was a German-British painter and sculptor , Director and filmmaker and writer . He is also considered to be one of the pioneers of automobile sport in Germany .

Hubert Herkomer was the only child of the (art) carpenter Lorenz Herkomer, who came from Waal near Landsberg , and his wife Josephine, nee. Niggl, schoolmaster's daughter and music teacher from the nearby village of Denklingen . He had inherited the talents of both parents, but his father had envisaged a career as a visual artist for his son since he was born. The liberal father emigrated to the USA with his wife and family in 1851 and first went to New York , and from around 1853 to Cleveland . However, he returned to Europe in 1857 and settled in Southampton . The now eight-year-old learned to read and write from one of his mother's music students.He only attended a public school in Southampton for six months: probably also to save school fees (the family lived in poor conditions for a long time), and then taught him until he was 18 . Year of life almost exclusively the father.

In the school year 1863/64 Hubert listlessly attended the local art school, where he had to copy his teacher's watercolors in his spare time; after all, he received a bronze medal for a drawing based on Michelangelo's Moses .

In 1865 a trip to Munich was possible because Lorenz Herkomer had accepted an order from his brother in America to carve four life-size evangelist figures after (smaller) figures by Peter Vischer . However, father and son only arrived there a week before the start of the long vacation. Hubert was just able to create the drawing that was required for admission to the academy. The painter Michael Echter was so impressed by her that he allowed the sixteen-year-old to take plaster models with him and correct his work during the holidays. He and his father also attended a private nude class. The stay in Munich (under the most modest of circumstances - people cooked, carved, drawn and slept in a single room!) Had to be broken off in early autumn because the passport of the father, who was naturalized in England, could not be extended in Munich and was only issued for six months traveling twice was out of the question for financial reasons. To take on the German citizenship again, however, would have meant that Hubert would have been drafted for military service.

In 1866 and 1867 the young man studied for one semester each at the South Kensington Art School . As early as the autumn of 1866 he had organized a painting class among his friends in Southampton, which, as Southampton's first art exhibition, exhibited 65 works by the group and sold three - including two by Herkomer. When the youth completed his second semester at art school in 1867, Frederick Walker's painting Bathers, exhibited at the Royal Academy of Arts , was much discussed: the public rated the picture as "brilliantly progressive" or "unbearably failed", depending on the attitude. At that time, Walker became the powerful role model of Herkomer for years, who imitated Walker's development from drawing and engraving to watercolor painting to oil and accordingly tried his hand at school as an illustrator, albeit without financial success. However, he came into contact with the well-known illustrator Luke Fildes at this time when he copied a picture in the South Kensington Museum for the London Illustrated News .

In 1868, in the idyllic village of Hythe , on the western side of Southampton Water , Herkomer managed , under modest circumstances, his first marketable drawings, which were cut and printed in wood by the Dalziel brothers , as well as watercolors, which the Dudley Gallery exhibited and sold in 1869.

In 1868, despite his parents' reservations, the draftsman settled in London in order to be close to possible clients: first with a family friend, in 1869 in his own apartment with a room suitable as a studio in Smith Street, Chelsea . That year his watercolor Leisure Hours was also accepted at the academy and "hung very well".

After a financially critical phase, in which he had even applied to play the zither and earned the bare minimum by stencil painting to decorate the South Kensington Museum, in 1870 he turned to William Luson Thomas , founder of the illustrated weekly newspaper The Graphic, which had been published since December 4, 1869 , in front. His picture was accepted immediately and he himself was invited to deliver further preliminary drawings according to his own ideas in the same quality in any quantity.

For the next decade, Herkomer's work as an illustrator was his main and readily available source of income. His picture of veterans in the Royal Hospital Chelsea in 1871 , which depicts a person who died during the service, was particularly well received . Thomas commissioned a watercolor of it for himself, and the oil painting afterwards, The Last Muster, painted in 1875 and received with applause at the Royal Academy . brought Herkomer's final breakthrough as an important painter: for the first time (to his chagrin!) he had broken away from his role model Walker in painting.

With the income flowing since 1870, Herkomer financed a summer stay in Normandy, from which he brought home the picture War News [news from the theater of war] . In 1871 he was appointed to the Royal Society of Painters in Water Colors , where he then exhibited frequently. In 1873 he met the painter Mansel Lewis , with whom he was to become a lifelong friend. Mansel also bought Herkomer's first oil painting After the Toil of the Day . 1880 founded Herkomer along with other artists the Society of Painter-etcher and Engravers , the etching (etching) and the engraving to establish (Engraving) as a recognized art forms.

Of the numerous portraits he made from around 1881, one of his first is in particular that of the war correspondent Archibald Forbes and, as counterparts, the pictures of a young English woman (Miss Katharine Grant, The Lady in White ) and an American (Mrs. Sealbee, of Boston, The Lady in Black ), 1884 and 1886; The Lady in White won him the great gold medal at the Berlin exhibition that same year and was then presented in several European cities.

Hubert von Herkomer was married three times. In 1873 he married Anna Weise († 1883) from Berlin, from this marriage there were two sons. In 1884 he married Lulu Griffiths (* 1849), daughter of the landlord Thomas Griffiths in Stanley House, Ruthin , who died in 1885. On September 2, 1888, Herkomer married his third wife, his sister-in-law Margaret Griffiths (1857–1924), in the mother tower in Landsberg, for which he had to take German citizenship and was naturalized in Landsberg. There are two daughters from this marriage.

Herkomer opened a two-semester painting school in Bushey in Hertfordshire, where he had lived since 1873, in 1883 , which he ran until 1904 for free. It consisted of two painting classes and an introductory class . The school embodied his vision of a very free, non-academic education in which students should be encouraged to find themselves and the styles that were appropriate for them, rather than following the teacher's style. Convinced that young people would find it difficult to relate to antiquity, for example, he renounced the drawing based on casts of ancient sculptures, which had been mandatory for beginners until then, and had his students draw from living models from the start and also paint nudes after the preparatory course. 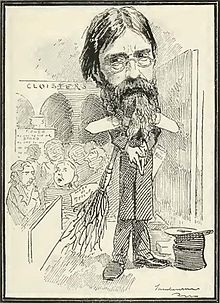 All of this was in stark contrast to the academic tradition of the time. Herkomer's unconventional but authoritarian leadership style, which was heavily criticized by the mothers of some students, was the subject of a cartoon in Punch magazine :
"No one to sit or stand" can be read under "Rules" - an allusion to Herkomer's demand "Stand by your work" [ double meaning "Stand while working", but rather "Stand by your work"]. The “self-made” broom, the set of rules and the beggar's hat complete the criticism.

The number of students, initially 25, rose to almost 100 in the school year 1893/94; a total of more than 500 students have graduated from Herkomer's school in 21 years. Among the better-known are Lucy Elizabeth Kemp-Welch (1869-1958), who became known as a horse painter, who ran the Bushey School of Painting from 1905 to 1926 after Herkomer's retreat in Bushey , and George Harcourt (1868-1947), who wrote the portrait, for example of the First Marquess Curzon of Kedleston, which his teacher had begun, completed after his sudden death.

The school building and the area had been made available and managed by a private third party from the start. In 1887 it became the Educational establishment incorporated and bonds were issued. With Herkomer's departure, everything was auctioned off with modest success. The artist acquired the land in 1912 and had it converted into a garden.

Herkomer was often in Germany during the summer, mostly in Bavaria. In Landsberg am Lech, where the mother, who died in 1879, had spent the last year and a half of her life, Herkomer acquired building land next to the parents' former house and began to have a 30-meter-high tower built, which lasted until around 1887 for cost reasons. Today the tower belongs to the Herkomer Museum. 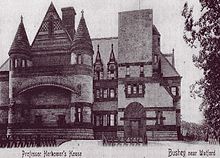 In Bushey, where his father moved after his mother's death, between 1883 and around 1894, Herkomer realized a project that his grandfather had in mind: a family home that was also intended to be a monument to the Herkomers' artistic abilities. The villa he built was named Lulula, after his wife Lulu. Most of the house was demolished in 1939.

In 1905, the enthusiastic motorist Hubert von Herkomer suggested a touring car - Rally in Germany and sponsored them. These Herkomer competitions, reliability tests, were also held over longer distances in 1906 and 1907 and made the new sport popular in Germany, among other things because, due to the artist's personal contacts, participants from the high and money nobility also came.

Herkomer's works include pictures with a social theme (his early work) and, from 1881, hundreds of portraits . The artist states, for example, that during his five-month trip to America from mid-December 1885, despite being ill for weeks at times, he created 34 portraits, with up to four sessions a day.

Later, the artist dealt with etching and photography and invented a mixed technique, which, as Herkomer engraving, caused a sensation that is common in Herkomer. He also dealt with enamel painting and goldsmithing.

In the following selection, original titles according to Herkomer's publications have been put in front. Only a few of his works have German titles in the original.

The play was performed at Bushey School in 1889, Herkomer wrote the story and the music, designed the sets and costumes with his wife and students, and played in the play himself. The conductor of the performance was Hans Richter .

Hubert von Herkomer was ennobled in Bavaria in 1899 and in Great Britain in 1907. He had already received three other high medals:

By the turn of the century, Herkomer had received ten medals that were very popular at the time:

After a corresponding waiting period ( ARA in June 1879), Herkomer was elected a full member of the Royal Academy of Arts on May 13, 1890 . The compulsory diploma thesis that he submitted in 1891 (the oil painting On Strike ) later earned him a professorship there.

In addition to ten memberships in British institutions, he was also appointed to six academies and artists' associations in the rest of Europe, including the Prussian Academy of the Arts in Berlin in 1885 and as a foreign member of the Académie des Beaux-Arts in Paris in 1896 .

The city of Landsberg am Lech also honored him many times: in 1893 he became an honorary citizen of the city, in 1900 it named a street after him, in 1991 the city donated a culture prize called the “Hubert von Herkomer Prize”.