Budleigh Salterton is about 13 miles southeast of the city of Exeter , seven kilometers east of Exmouth and about ten kilometers southwest of Sidmouth .

The place is at the mouth of the Otter River . The estuary, a fertile swampy landscape with reed beds , is an important refuge for migratory birds and has been declared a nature reserve ( Site of Special Scientific Interest ). The bay has a beach about three kilometers long, which is made up of large pebbles. This pebble beach stretches from Littleham Cove in the west to Otterton Ledge in the east, where the otter flows into the English Channel.

The village was originally called Salterne because salt used to be extracted in large salt pans at the mouth of the river.

Budleigh Salterton is now almost entirely residential, with most businesses on or near the High Street. The main street of Budleigh Salterton with many notable buildings is now a listed building. The Fairlynch Museum is housed in a Grade I listed house with a thatched roof, with an exhibition on the history and geology of the area. It shows dolls , costumes , lace and wefts and other exhibitions with a regional reference. The museum also has a local archive.

There is a regular bus service to Exmouth and Sidmouth.

Cliff on the western edge of Budleigh Salterton. Here the Budleigh-Salterton conglomerates stand at the foot of the cliff, overlaid by dune sediments of the otter sandstone. 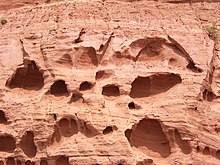 Large-scale honeycomb weathering in dune sediments of the otter sandstone.

River sediments of the Otter Sandstone east of Budleigh Salterton, just off the Otter Estuary near the Otterton Ledge .

From Orcombe Point near Exmouth, up to Old Harry Rocks , east of Studland Bay , extends in East Devon and Dorset is a 155 km long strip, the coast and cliffs as the first natural landscape in England by the UNESCO for World Heritage declared. The steep coast in the vicinity of Budleigh Salterton is part of this so-called Jurassic Coast and Budleigh Salterton itself is an official access point ( Gateway Town ) to this coastal geotope .

Budleigh Salterton is on the route of the so-called World Heritage Tour (also known as "walk through time"), which begins in Orcombe Point and reaches Budleigh Salterton after six kilometers. The natural outcrops along the Jurassic Coast form a largely continuous sequence of Triassic , Jurassic and Cretaceous rocks that represent around 185 million years of geological history. The rock layers of the Jurassic Coast are usually slightly inclined to the east, which is why the geologically oldest part is in the west of this world natural heritage. To the east, the cliffs are built up from successively younger rocks. The storage room that received the sediment series from the Jurassic Coast at that time is the so-called Wessex Basin .

In the Budleigh Salterton area, the older rocks of the Jurassic Coast succession are exposed. Most of them come from the Triassic. The rock series were assigned to the "Sherwood Sandstone Group" of the so-called New Red Sandstone in the course of geological research in southern England and subdivided into two clearly distinguishable strata packages: the Budleigh Salterton Pebble Beds Formation, dominated by conglomerates , and the conglomerate-based, more fine-grained sediments such as sand - and siltstones formed otter sandstone formation . Both rock sequences are distinctive red and were in dry, z. Partly deposited in a desert climate. The sea water in this stretch of coast turns red when there are strong waves due to washed-out sediment particles.

The pebbles in the Budleigh Salterton Pebble Beds consist mostly of hard, reddish, yellowish or gray quartzite . These quartzite pebbles are often 10 or 20, sometimes up to 40 centimeters in size and have clear impact marks that originate from the transport to their current position. Furthermore, the pebbles consist of black tourmalinite or tourmaline- rich horn rock and quartz. Sandstone pebbles, which contain fossils of Ordovician brachiopods , are relatively rare . In inland outcrops of the Budleigh-Salterton conglomerates further to the north, the mean size of the pebbles decreases and more and more sandstone layers are included in the sequence.

The material that makes up the majority of the pebbles is so-called Armorican quartzite , a rock that does not occur on the British Isles, but is typical of the Ordovician of continental Central, Western and Southwestern Europe. The closest deposits to Budleigh Salterton are in north-western France. Only the Turmalinit or hornfels can be relatively sure the contact area of only about 20 kilometers west forthcoming Dartmoor granite assign.

The Budleigh-Salterton conglomerates are the deposits of a river system with a bed of debris . These rivers, which flow relatively quickly because of their steep gradient, brought the quartzite pebbles with them from the south from the so-called Armorican massif in what is now Brittany . Smaller branch arms washed debris from the Cornubian massif immediately to the west into the main arms, u. a. the tourmalinite or hornfels from the area around the Dartmoor granite. The Armorican and Cornubian massifs are partial massifs of the Variscan Mountains , which were largely eroded in the early Triassic. The extensive river system whose deposits represent the Budleigh-Salterton conglomerates is referred to in the geological literature as the Budleighensis River System ( Budleigh River System ).

Over the past millennia, surf and rain have continuously washed the boulders out of the cliff-top rocks and the cliffs themselves, and now form Budleigh Salterton Beach. It is believed that during heavy storms, waves and strong currents carried debris from here further east to Chesil Beach and even as far as Lulworth Cove and the Isle of Wight .

In the lying area of the Budleigh-Salterton conglomerates, a little further west at the small bay Littleham Cove , the Littleham Mudstone Formation is open. She is v. a. known for their radioactive concretions containing vanadium and uranium minerals.

The cliffs of the cliff in the vicinity of Budleigh Salterton are type locality and type profile or part of the type profile of the Littleham claystone and the Budleigh-Salterton conglomerates and the otter sandstone.