The title of this article is ambiguous. Additional meanings are listed under Exeter (disambiguation) . 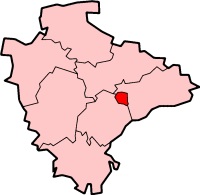 Location of Exeter in Devon

Exeter [ ˈɛksɪtə ] is the capital of the county of Devon in south-west England and was formerly the capital of Cornwall . In 2016 the city had a population of just under 130,000. Exeter is located at a ford of the River Exe , a few kilometers north of the confluence with the English Channel . The city's motto, Semper fidelis ("forever loyal"), was proposed by Elizabeth I in 1588 .

Around 50 AD, after the conquest of Britain under Emperor Claudius , the Romans founded the city ​​of Isca Dumnoniorum at the point where there was already a small settlement of the Celtic indigenous people. As a result, Isca was the main fortified town of the Dumnonian tribe . Numerous sections of the Roman city ​​wall have been preserved to this day. There are remains of a Roman bath ; due to its close proximity to the cathedral, however, it has only been partially excavated and is not open to the public. Numerous Roman coins have also been found. Isca was the southern starting point of a Roman road that led in a north-easterly direction to Lincoln ( Lindum ), via Bath ( Aquae Sulis ), Cirencester ( Corinium ) and Leicester ( Ratae Coritanorum ).

Around 410 the Romans withdrew from Britain. There is no record of Exeter's history for more than two centuries. In the 7th century the city fell to Wessex . An Anglo-Saxon monastery was built here around 680, where St. Boniface was taught. The Danes attacked Exeter 876, known to the Anglo-Saxons as Escanceaster , and briefly captured it, but Alfred the Great was able to chase away the invaders the next year and had the Roman city walls repaired. In 893 Alfred was able to defend the city a second time against a Danish attack. King Æthelstan expelled the Britons from Exeter around 928 ; It is not known whether they had lived here continuously since Roman times. At the same time, Æthelstan had the city fortifications restored again.

In 1001, the Danes again failed to seize Exeters. However, after the town came into the possession of Emma of Normandy in 1002 as part of her dowry when she married Æthelred the Unready , Emmas Vogt, a French named Hugh, admitted the Danes to Exeter under their king Sven Gabelbart the following year then looted it. In 1050 the seat of the newly formed diocese of Cornwall and Crediton in 1032 was moved to Exeter and Leofric became the first bishop of Exeter .

In 1068 the city was besieged by Norman troops of William the Conqueror , to whom they had refused to swear allegiance, and surrendered after 18 days. The Norman ruler had the fortress of Rougemont built here, of which he appointed Baudouin de Meules to be castellan . In the initial phase of the civil war that broke out after the death of Henry I , Baldwin de Redvers held Exeter against King Stephen for three months in 1136 , but then capitulated. Henry II gave Exeter its first charter.

In the 13th century Exeter became the most important city in south-west England. It exported pewter and cloth , among other things . From 1295 it sent two members to the English Parliament (this number was reduced to one member in 1885).

Exeter had to endure sieges several times, so in 1467 during the Wars of the Roses , in 1497 by the pretender Perkin Warbeck and in 1549 by insurgents from Cornwall and Devon, who opposed the religious reforms of Edward VI. revolted while Exeter remained loyal to the king. The troops of Edward VI. forced the insurgents to lift the siege of the city after about a month. In 1537 Exeter had become an independent county, but remained the county capital of Devon. Exeter has been an Anglican bishopric since 1560.

During the English Civil War (1642–1649) Exeter was initially on the side of the supporters of parliament, but the royalists conquered it in September 1643 and held it for almost three years for King Charles I. In April 1646 the city surrendered to the Republican general Thomas Fairfax negotiates. At that time Exeter was an economically very prosperous city and had a particularly important wool trade, which disappeared completely by the beginning of the 19th century.

At the beginning of the Industrial Revolution , Exeter developed due to the processing of local agricultural products as well as the hydropower of the fast-flowing Exeter . However, when the steam engine superseded hydropower, Exeter was too far from coal and iron to develop the industry further. The city lost some of its importance, but was spared huge, ugly industrial facilities. This is why Exeter is now one of the UK's best quality of life cities .

During the Second World War , the city, which was the largest supply base for the United States Navy, suffered great damage from bombing by the German Air Force . Many historical buildings, including the cathedral , were damaged or even completely destroyed. In the 1950s, most of the buildings were faithfully rebuilt. Critics complain, however, that too many buildings that were only partially destroyed were demolished, the quality of the reconstructed buildings was poor and that too many concessions were made to motorized traffic. For example, some historical lines of sight on the cathedral were sacrificed for the reconstruction. As a result, Exeter, unlike Bath, is known for its beautiful buildings, but not for its beautiful city ​​center . The problem has been recognized and careful urban redevelopment, in which some mistakes from the 1950s are to be corrected, is currently (2008) planned. 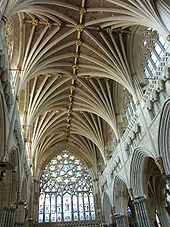 Vaulted ceiling of the cathedral

Light industry is mainly based in Exeter. It is the seat of the Met Office , the UK weather service, one of the largest meteorological institutions in the world. It has recently been relocated from Berkshire .

The main train station is Exeter St. David's. There are two rail lines to London , a faster one via Taunton and a slightly slower one via Salisbury . Other main lines run north to Bristol and Birmingham and west to Plymouth and Cornwall .

Exeter is the terminus of the M5 motorway from Birmingham and Bristol.

Exeter has a small international airport that was the home base of the airline Flybe . There are scheduled flights to Toronto (seasonal), Amsterdam and Paris , British and Irish cities, the Channel Islands and the Isles of Scilly . In addition, charter flights are often offered, mainly to holiday destinations such as the Balearic Islands or the Canary Islands .

One of the city's largest employers is the University of Exeter . One of the best-known alumni is Joanne K. Rowling , the author of the Harry Potter novels, who studied French here .

The University of Plymouth has an external location here. There are also several well-known language schools in Exeter. Since 2004 Exeter has been the seat of the British weather service Met Office , which was previously in Bracknell .

The original manuscript of one of the most important testimonies of Anglo-Saxon literature , the 10th century Exeter Book , is kept in the cathedral. The Exeter Book is one of four manuscripts which together contain practically all of the extant poetry in Old English . It includes the higher rated short poems, some religious subjects, as well as some slightly insane puzzles.

The Inquisitio Eliensis or Exon Domesday (named after the place where it was kept, Exeter) is one of the volumes in the Domesday Book .

The cathedral's choir is known nationwide and the cathedral itself is a frequent venue for guest orchestras.

The Northcott Theater 's Shakespeare performances in the ruins of Rougemont Castle are highly valued across the country.

Exeter located next to the unterklassigen football club Exeter City (League Two 2018/19 = viertklassig) the Rugby Union Club Exeter Chiefs , which since the beginning of the 2010s the strongest clubs in England one and the English Rugby Union Championship 2016/17 won . The Chiefs' home venue has been Sandy Park since 2006 .