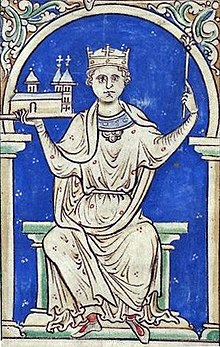 Stephen's father died as a crusader in Palestine in 1102. The son therefore came to the court of his uncle, King Henry I of England , at a young age . There he grew up, received rich estates and became one of the most powerful men around the king. From 1112 he was Count of Mortain in Normandy. In 1125 he married Mathilda von Boulogne , the daughter and heiress of Count Eustach III. of Boulogne and the Princess Mary of Scotland. Stephan came into possession of the strategically important county of Boulogne . Mathilda is considered one of the most important medieval queens in England. She achieved military success, was one of the most important patrons of the Knights Templar and founded Faversham Abbey , where she and Stephan are buried. The marriage produced five children (see below).

The English King Heinrich I died in 1135 without a male successor, but had his daughter Mathilde , known as Maud, the widow of the Roman-German Emperor Heinrich V , appointed by the barons as his successor. She became the first ruling ruler in the history of England. As the grandson of Wilhelm the Conqueror, Stephan also claimed the throne for himself. He found support from some nobles, bishops and citizens of London. After making concessions to the church, Pope Innocent II also recognized his claim. On December 22, 1135, Stephen was crowned at Westminster Abbey .

Fighting against the supporters of Maud's claim to the throne turned into an all-out civil war in 1139 when the Queen landed in England with her new husband, Gottfried Plantagenet, Count of Anjou . The estates of England split into two camps, each supporting one side. Twelve years of fierce fighting ensued. When Stephan was captured after the siege of Lincoln in 1141 , his wife Mathilda, who had previously served as a military leader, took over the military leadership. With the support of the people of London , she ousted Queen Maud from the capital. Stephan was later exchanged for Robert of Gloucester . Queen Maud's half-brother and chief adviser was captured in September 1141 after the Battle of Winchester . Stephen was crowned again on December 25, 1141 in Canterbury Cathedral.

Neither party could achieve a decisive victory. In addition, King Stephen did not succeed in obtaining general recognition as heir to the throne for his son Eustach in 1152 . When he sought an armistice with his opponents the following year, this met with open resistance from Eustach. His sudden death on August 10, 1153 finally opened the way to a compromise. In November of that year the King negotiated the Wallingford Treaty with his opponents . Stephan then adopted Maud and Gottfried's son, who later became Heinrich II , who had meanwhile intervened in the fighting in England, and appointed him as his successor. Stephan's youngest son Wilhelm had to be content with his parents' original territories, the counties of Mortain and Boulogne. The Wallingford Treaty ended the Civil War. Queen Maud withdrew to Normandy. King Stephen ruled for almost a year until he died of a heart attack at Dover Castle in October 1154 .

The balance of power shifted under Stephen's rule. The king seems to have distrusted the ecclesiastical incumbents as those responsible for administration and instead strengthened the power and number of the earls. The title of Earl , previously little more than an honorary title, was expanded by him as a position of power. For this, Stephan hoped the higher loyalty of the vassals rewarded with this in the civil war. Ultimately, however, the strengthening of the Earls under the turbulent conditions resulted in the emergence of semi-autonomous domains and thus a weakening of kingship. In 1149, Stephen left Northumbria to King David of Scotland .

With the noble chambermaid Dameta of Normandy ( House Giroie ) he had three illegitimate children.

He also had two other illegitimate children: