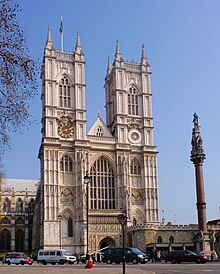 This church is not to be confused with the Roman Catholic Westminster Cathedral .

The current location was originally the modest abbey church of a Benedictine abbey founded around 960 by King Edgar and Dunstan of Canterbury . Analogous to St Paul's Cathedral , the East Minster , the abbey of the Apostle Peter was given the popular name West Minster (see Münster ).

In the 1040s, Eduard the Confessor moved his residence in the immediate vicinity of the building and had the monastery expanded into a representative abbey in the Romanesque style between 1045 and 1065 . The consecration of the abbey church took place on December 28, 1065. The king was already too sick to attend the festivities and was buried here after his death. The only surviving image of this first abbey can be found on the Bayeux Tapestry . 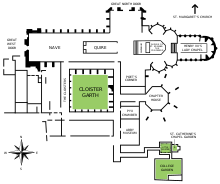 In 1245, Henry III. commissioned the construction of today's church in the style of French high Gothic . By 1269 the choir, transept and the eastern part of the nave with the adjacent cloister and the chapter house had been completed. A "Henry of Reyns" has been handed down as the architect of this construction phase, who, as the structural forms testify, came from Reims Cathedral . The nave was not erected until one hundred years later in the years 1376–1506, without any change in the system of forms. The lower part of the west facade dates from the 15th century. The two main towers, on the other hand, were only built between 1722 and 1745 by Christopher Wren , Nicholas Hawksmoor and John James , who also adopted the Gothic style. In this regard, Westminster Abbey is the most French of the English Gothic churches. Most of the stone came from Caen in France ( Pierre de Caen ), the Isle of Portland ( Portland ), and the Pays de la Loire region in France. Purbeck marble was used for the stonework and floors of Westminster Abbey, although the various tombstones are made from different types of marble.

The magnificent Lady Chapel of Henry VII , one of the most beautiful late Gothic works in Europe, was built in 1503–1519 in the rich forms of the Perpendicular Style .

In the course of the English Reformation , Henry VIII lifted the Benedictine abbey in 1540 and gave the church the rank of cathedral of the Church of England (until 1550). After the brief return of the Benedictines under Maria I , Elizabeth I established the Anglican collegiate monastery of St. Peter in 1560 , which still exists today. 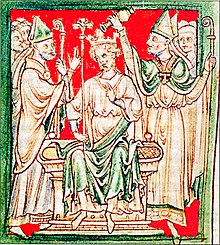 Since William the Conqueror , all kings of England and the United Kingdom have been crowned in Westminster Abbey. Traditionally, the coronation is performed by the Archbishop of Canterbury . Up to George II († 1760) almost all kings were buried here (see royal graves ).

The main entrance is on the west side. The portal is framed by depictions of the four Christian virtues Truth , Justice , Mercy , Peace and ten martyrs of the 20th century.

Martyrs of the 20th century at Westminster Abbey (west wall; from left to right): 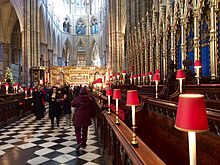 In the nave of Westminster Abbey

In the central nave is the grave of the Unknown Soldier . In the soil of French battlefields, an unknown soldier from the First World War rests “in the midst of the kings because he served his God and Fatherland well”, as an inscription on black marble proclaims. The fallen of both world wars is also commemorated in the St. George's Chapel.

In the nave are the graves of the African explorer David Livingstone , the poet Ben Jonson and Prime Minister Bonar Law and Chamberlain . In the right (south) transept is Poets' Corner - German: Dichterecke - with a memorial to William Shakespeare and the tombs of Geoffrey Chaucer , Alfred Tennyson, 1st Baron Tennyson , Robert Browning , Henry Wadsworth Longfellow , Charles Dickens , Georg Friedrich Händel u. v. a.

Numerous famous British statesmen are buried in the left (north) transept. a. the elder Pitt , Palmerston , Disraeli and Gladstone .

From the northern part of the transept one enters the "Chapel of Edward the Confessor " , located behind the high altar . In the middle is the coffin of the king who died in 1066. Behind it is the coronation chair, in which the Stone of Scone was located until 1996 . The Scottish kings were crowned on this stone for centuries until Edward I took it from the Scots in 1297. The stone was stolen at Christmas 1950 and only found again after a long search. It was officially returned to Scotland in 1996 and has been in Edinburgh Castle ever since . The stone is considered a symbol of the unity of the kingdoms of England and Scotland. In this chapel are the coffins of Henry III. , Eduard I., Eduard III. , Richard II. And Heinrich V.

The organ of Westminster Abbey is on the north and south sides of the western part of the choir nave. The instrument was made in 1937 on the occasion of the coronation of George VI. Built by the British organ builder Harrison & Harrison (Meadowfield). It initially had 84 registers , divided into 4 manuals and pedal . Pipe material from the previous organ, which was built by William Hill in 1848, was reused in the instrument . The two organ cases date from 1895. They were made for the Hill organ.

In the course of a comprehensive overhaul in 1982, the disposition was expanded, in particular that of the Choir Organ , which was equipped with an additional, non-swellable work (Lower Choir Organ).

Today the instrument has the following disposition: 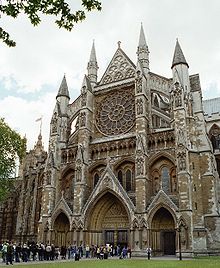 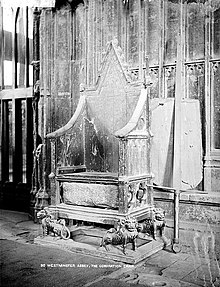 The tomb of Edward the Confessor

The tomb of Henry III. 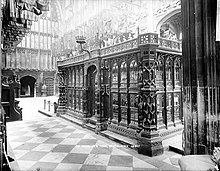 The tomb of Henry VII.

The tomb of Maria Stuart 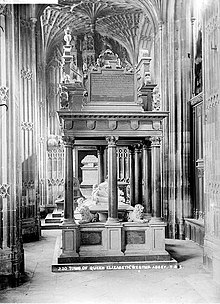 The tomb of Elizabeth I

The tomb of Princess Sophia (1606), daughter of Jacob I; stereoscopic photo

The large three-aisled chapel of Henry VII forms the eastern end . The magnificent ceiling is particularly noteworthy. At the end of the chapel, his bones and those of his wife Elizabeth of York rest in a marble coffin . In the left aisle are the coffins of Elizabeth I and Mary I , in the right aisle that of Elizabeth's adversary, the Scottish Queen Maria Stuart .

The following members of the English royal family are buried in the abbey:

The following personalities were also buried in Westminster Abbey:

Since 1911, for reasons of space, more and more urns were buried, which was finally made the rule by the chapter. Since 1936 (except in the private crypt of the Dukes of Northumberland ) there has been no coffin burial in Westminster Abbey and its cloister. Similar rules also apply at St Paul's Cathedral .

The Westminster Abbey Museum has been located in the triforium of the abbey church since 2018 and is known under the name "Queen's Diamond Jubilee Galleries". The exhibition is divided into four thematic chapters: building the abbey, devotion and daily life, the abbey and the monarchy and the abbey and national memory.

In addition to a collection of royal burial objects (e.g. the funeral saddle, helmet and shield of Henry V), a series of medieval glasses, sculptural fragments from the 12th century, the collections of the museum also contain the coronation chair of Queen Mary II. Replicas of the crown jewels and historical portraits of Edward III, Henry VII and his wife, Elizabeth I, Charles II, William III, Mary II and Queen Anne.

Wax figures of Horatio Nelson and Prime Minister William Pitt show them in some of their original clothing. As part of restoration work on a portrait of Elizabeth I, an original corset was found, which is dated to 1603.

Another exhibit is England's oldest surviving altarpiece, the Westminster Retable from the late 13th century. Most likely, it was designed for the high altar of the Abbey and was badly damaged in the past centuries - it was carefully cleaned and preserved for exhibition.