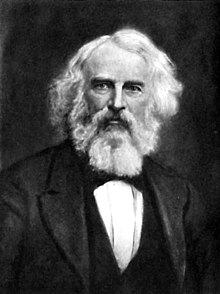 Longfellow's mother came from an old New England Puritan family , his grandfather Peleg Wadsworth was a general in the Revolutionary War and later became a member of the US House of Representatives, as did his father Stephen Longfellow . Born in what is now Maine , Longfellow grew up well protected and studied at Bowdoin College in Brunswick , where he became friends with Nathaniel Hawthorne . Between 1825 and 1829 and from 1831 to 1835 he toured Europe, learned among other things German, Dutch, Swedish and Finnish, read a lot and was so deeply influenced by German Romanticism and Goethe . On his return he taught at Harvard University . After his first wife Mary Storer Potter died in 1835 after only four years of marriage, Longfellow married Frances Elizabeth "Fanny" Appleton, a daughter of Nathan Appleton , with whom he had six children: Charles Appleton (1844-1893), Ernest , in 1843 Wadsworth (1845–1921), Fanny (1847–1848), Alice Mary (1850–1928), Edith (1853–1915) and Anne Allegra (1855–1934). In 1844 Longfellow was elected to the American Academy of Arts and Sciences .

Longfellow was a folk poet. His rhymes were catchy. He was one of the first to deal with typical American topics: patriotism, love of the landscape, nature and the traditions of his homeland. He wrote numerous dramas and a few novels, all of which have more or less been forgotten. The epic poems Evangeline (1847) and The Song of Hiawatha (1855), which he modeled on the Finnish national epic Kalevala , are of lasting importance . It describes the life of the Ojibwa chief Hiawatha and ends with his recommendation to his people to bow to the 'white man'. The work inspired Antonín Dvořák for the 2nd movement of his 9th symphony "From the New World" .

Because his work appeared too conventional - and thus too European - it was deleted from the canon of American literature after 1900, particularly due to the judgment of George Santayana and Vernon Louis Parrington . However, until not so long ago, many American students memorized his poem Paul Revere's Ride , which glorifies an episode from the American Revolutionary War . The song I Heard the Bells on Christmas Day , based on Longfellow's poem Christmas Bells , is still a popular Christmas carol today.

A 2007 United States Postal Service stamp shows the portrait of Longfellow and in the background on the right a depiction of the horseman Paul Revere.

Longfellow's bust stands in Poet's Corner at Westminster Abbey in London , a memorial was inaugurated in his hometown of Portland in 1888. In 1959 a mountain range in the state of Maine was named after him: the Longfellow Mountains . In addition, the Longfellow Bridge in his hometown of Cambridge was named after him. Longfellow lived from 1837 until his death in a traditional house that served George Washington as the headquarters of the Continental Army during the American Revolutionary War. The house in which Longfellow created most of his work remained in family ownership and was designated in 1966 as Longfellow House - Washington's Headquarters National Historic Site . It became the property of the federal government in 1972 and is today a national memorial for the life and work of Longfellow and the siege of Boston in the Revolutionary War of 1775/76. It contains, among other things, Longfellow's library, which has been preserved in full, but his documents are in the archives of Harvard University.

The title of the song Longfellow Serenade (1974) by singer Neil Diamond is a reference to Henry Wadsworth Longfellow.