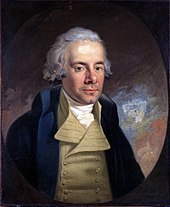 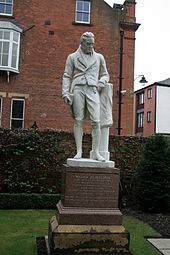 William Wilberforce , FRSA (born August 24, 1759 in Kingston upon Hull , † July 29, 1833 in Chelsea ) was a British parliamentarian and leader in the fight against slavery and the slave trade .

As a child, Wilberforce is said to have met the former slave trader John Newton and even be friends with him. He studied as a member of St John's College at Cambridge University and was elected to the House of Commons in 1780 as a member of his hometown Hull . Around 1784 he converted to evangelical Protestantism on a trip through continental Europe and began his mission to reform morals ("Proclamation Society") and especially to end the slave trade, supported by abolitionists such as Granville Sharp , Thomas Clarkson , Quakers and Methodists . In a parliamentary session in 1789, he and his college friend William Pitt , who was then Prime Minister , proposed the abolition of the British slave trade. From then on, he repeated the introduction of the bill into parliament every year, except in the years 1800 to 1803.

In 1807, after 18 years of campaigning and fighting slavery, Wilberforce finally succeeded. After ten hours of debate in Parliament, the Slave Trade Act was passed on February 24, 1807 at 4:00 am by an unexpected and overwhelming majority of 283 to 16 votes. One month later, on March 25, 1807, the law came into effect. From then on, the African slave trade was forbidden in the British sphere of influence and slave traders were put on an equal footing with pirates. The internal slave trade in the non-African colonies was still allowed. The United States passed an Act Prohibiting Importation of Slaves ; it came into effect on January 1, 1808 , based on a stipulation in the American Constitution that guaranteed the slave trade until 1808.

Wilberforce now directed its efforts to enforce this ban in the other western dominated areas. At his instigation, Lord Castlereagh raised the matter at the Congress of Vienna . After the conclusion of the treaties in which France , Spain and Portugal undertook to ban the slave trade, he campaigned for the monitoring of the decision.

After the abolition of the slave trade, he was committed to the elimination of slavery in general. As early as 1816 he put a motion in parliament to reduce the number of slaves in the British West Indies, and when the government was preparing for complete emancipation from 1823 on, he displayed great zeal and led heated debates with Thomas Buxton at his side in the House of Commons.

Since 1825 he lived withdrawn for health reasons. He died in Chelsea on July 29, 1833 , three days after slavery was abolished in Britain. He was buried in Westminster Abbey .

Like many Britons, Wilberforce was critical of Hinduism . The caste system and practices such as widow burning or the discrimination against women and girls, including the killing of newborn women , were rejected . Wilberforce therefore once said that the conversion of the Indian people to the Christian faith was more important to him than the abolition of slavery. He was one of the growing group of British people who advocated allowing missionary work in India .

“The depravity of the slave trade struck me as so enormous, so terrible, and irreparable that I made the unreserved decision to abolish it. May the consequences be whatever they want, I have decided for myself that I will not give up until I have enforced the abolition of the slave trade. "

- in front of the House of Commons

“My way is a public way. My business is in the world; and I have to mingle with the people or give up the post that Providence seems to have assigned me. "

Numerous memorials were set to Wilberforce. The house where he was born is now a museum. The Wilberforce College in Ohio is named after him.

In Carol Reed's film The Young Mr. Pitt (1942) he was played by John Mills . 2006 his life was filmed under the film title Amazing Grace ; here Ioan Gruffudd took over his role.

The William Wilberforce Trafficking Victims Protection Reauthorization Act of 2008 for combating human trafficking and forced prostitution is named after him .