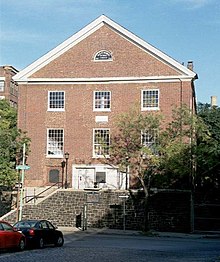 Methodist and Wesleyan churches are churches whose theology and church constitution are based on the Methodist tradition founded by John Wesley . In the case of John Wesley, the main emphasis of his theology is not on opinions and teachings, but on attitudes and conduct . The Methodist Churches were co-founded by John's brother Charles Wesley and George Whitefield .

Special features of the Wesleyan tradition

At the time of their origins, the Methodists differed less from other Protestant churches in their teaching than in their stricter, more methodical way of life based on biblical principles. The churches of the Wesleyan tradition, in contrast to most other churches, did not come into being because of a doctrinal difference to another church: Both the emergence of the first Episcopal Methodist Church and later the emergence of different Methodist churches was primarily due to political, linguistic or cultural circumstances Differences conditional.

This explains why the churches of the Wesleyan tradition not only separate, but often also reunite, and that they are open to ecumenical cooperation. 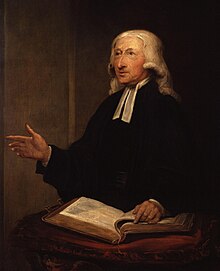 John Wesley did not develop a theology of its own . The Methodist and Wesleyan churches theologically agree with the conservative evangelical mainstream on most points , but there are many progressive Methodists. In general, Methodists do not try to differentiate themselves from other churches through their theology. Some of Wesley's theological views are shared by most Methodists today:

Even if the theological dogmatics of Methodism does not differ significantly from that of other evangelical faiths, the piety of those who profess Methodism has some characteristic traits in the past and present. It is influenced by the traditions of Puritanism and Pietism , both of which played an essential role in Wesley's biography. According to this, the idea of ​​individual conversion as a specific experience that, in tradition, often has to be specified with day and hour (as Wesley himself testifies) plays a central role in Methodist piety . In addition to conversion, perfection, as the relationship with Christ, through which man does not have to remain permanently attached to sin, personal sanctification based on the life-changing experience of God's grace, and growth in love are essential . Hence both the strong emphasis on diakonia and the skeptical view of pleasures declared as secular (gambling, theater, dance, alcohol consumption, etc.).

The churches of the Wesleyan tradition have a distinctive church structure that contains elements of congregationalism , Presbyterianism and episcopalism . A special feature is its network system in which all units regionally and internationally support each other both financially and spiritually .

In most Wesleyan churches, women can assume any office. The lay workers can be of great importance.

A member of a Methodist church is only someone who, as an adult, consciously decides to join this Methodist church and actively participate in community life. When accepting members, which usually takes place in the context of a church service, a personal commitment to the Christian faith based on the Bible is expected. Membership in a Methodist church is not considered necessary for salvation and therefore no pressure is exerted to become a member.

The fellowship in the local church is very important to the Methodists. Methodist churches do not close themselves off from the outside; Everyone is welcome both in church services and in community life. In every Methodist church there are also more or less numerous friends who are not official members but who also take part in the life of the community.

Wesleyan Churches know as sacraments , the baptism and the Lord's Supper .

Infant baptism is the norm in many churches, but does not automatically lead to membership. Those who are not baptized are baptized on the occasion of their acceptance into the Church. The churches of the Wesleyan tradition recognize all Trinitarian baptisms of other churches ( see also: Magdeburg Declaration ).

The Lord's Supper is a liturgical celebration in the Methodist and Wesleyan churches , presided over by an ordained clergyman. The liturgy has its roots in the Anglican tradition.

At the Lord's Supper, the Methodist churches assume the real, personal, and living presence of Jesus Christ in the Lord's Supper, without wanting to fully explain it. Both the pure commemoration and the doctrine of transubstantiation are rejected. The Lord's Supper is sacrament, Eucharist (thanks), communion of the (comprehensive) Church, remembrance and means of grace . It is also a sacrifice , though not as a repetition of Christ's sacrifice, but as a re-representation, whereby the church presents itself as a sacrifice in union with Christ (Romans 12: 1).

For Methodists, the Lord's Supper is a celebration of the whole Church - all Christians are welcome, including those who are not baptized, who want to partake in faith. Nobody may be rejected because of age or lack of understanding.

The Methodist churches in the United States were an active part of the abstinence movement in the 19th century , and many of them still use grape juice instead of wine as a result of this tradition. In some German communities that used the communion wine in earlier years, it has since been abandoned. The reason is that the Lord's Supper is also celebrated with children and that “dry” alcoholics should not be denied access to the Lord's Supper.

As early as 1908, the Methodist Episcopal Church adopted a social commitment in which it committed itself to social engagement:

This was followed by further confessions to this day, which dealt with and deal with current social issues. ( See also: Social commitment of the UMC )

Methodists were and are often active in interdenominational social projects such as abolitionism , the abstinence movement, environmental protection or the peace movement . 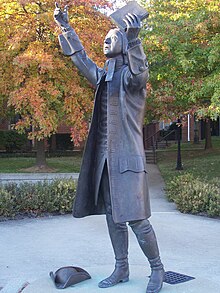 Methodism has its roots in 18th century England. A group of religious students in Oxford stood out for their systematic timing and attitude towards life. The students of this "Holy Club" were therefore derisively referred to as "Methodists".

The brothers John and Charles Wesley and George Whitefield founded an enthusiastic revival movement within the Anglican Church between 1729 and 1735 after a personal conversion , which absorbed the influences of Puritanism , Pietism and the Moravian Church .

According to the Methodists, it was not the church ritual of the Anglican Church that constituted the true Christian faith, but conscious inner conversion ( repentance ) and rebirth based on justification through Jesus Christ , through which a personal assurance of salvation arises. Because of the relationship with Jesus Christ, man does not have to remain a being bound by sin . For Methodists, sanctification is not a state of attainment, but a goal, understood as a continued growth in love for God and for others (for Methodists there is no one without the other). Evangelism , like diakonia, is a natural consequence of this growing love, and for Methodists the two are inseparable.

The early Methodists traveled as traveling preachers through the whole of Great Britain and later also through the American colonies with the aim of converting people, especially those with lower levels of education who were neglected by the Anglican Church, to the faith and to a sacred Christian life through revival sermons to lead. Because of their unusual, un conventional appearance and their missionary zeal they became the butt of jokes and often had to face harsh criticism of the official Church. In 1788 there were about 75,000 Methodists in England.

Essential characteristics of the early Methodists were a personal, committed faith, lay preaching, organization in small local groups (classes) with Bible study and mutual accountability, the ideal of a holy Christian life, and social work . John Wesley e.g. B. was a preacher who founded pharmacies for the poor and loan offices, wrote books on folk medicine , and campaigned for prison reforms and against slavery .

In 1817, English merchants made the first efforts in Hamburg to found a Methodist congregation in Germany. Following an objection from the Anglican Church, these activities were banned by the Hamburg Senate after about two years. The Methodist teachings first became known among Protestant Christians in Germany through Friedrich Adolph Krummacher , who published a German translation of the two-volume work by Robert Southey John Wesley's Life, The Origin and Spread of Methodism, in Hamburg in 1828 and 1841 . It was the first comprehensive presentation of Methodism in the German language. Three of his songs were included in the Methodist Church's hymn book for the congregations in Germany (1926).

Methodism finally gained a foothold in Germany through the missionary work of returnees who had become Methodists in England and the USA. The first of these returnees was Christoph Gottlob Müller , who worked in Württemberg from around 1830 on behalf of the British Wesleyan Methodism. From 1849 members of the Episcopal Methodist Church worked in Bremen , from 1850 members of the Evangelical Community in Stuttgart and from 1869 members of the Church of the United Brothers in Christ in Naila bei Hof .

The oldest church building that has been used by Methodists (since 1960) is the Aegidia Church in Erfurt , built in 1324 .