The Yale University in New Haven (Connecticut) is one of the most prestigious universities in the world and the third oldest University of the United States . It was named after one of its first sponsors, the merchant Elihu Yale . In 2018, the university had around 29.4 billion US dollars, after Harvard University , the second largest foundation capital of an educational institution worldwide. She is a member of the so-called Ivy League , a group of eight top universities in the northeastern United States, and a founding member of the Association of American Universities , an association of leading research-intensive North American universities that has existed since 1900. In addition, Yale belongs to the University network International Alliance of Research Universities in. With Harvard and Princeton , Yale is perceived in media and society worldwide as one of the three most influential, renowned and high-performance Ivy League universities in the USA.

Yale University has a library system that included over 12.5 million books in multiple locations in 2009. A total of 49  Nobel Prize winners have studied, taught or worked at Yale. The university's graduates include five US presidents , 19 US Supreme Court justices, and various foreign heads of state. The Yale Law School is the most selective law school in the United States.

Yale University is the third oldest American higher education institution after Harvard University in Cambridge, Massachusetts and the College of William and Mary in Williamsburg, Virginia . Yale's beginnings lie in the decision of the General Court of the Connecticut Colony's An Act for Liberty to Erect a Collegiate School on October 9, 1701, according to which a college school is to be established. Soon after, a group of ten Congregationalists donated the materials they had received as Harvard students to the institution as the foundation for the library. Years earlier, Harvard University was the only university in North America. Yale was founded to train leaders. The institution originally called Collegiate School opened its teaching in the house of its first rector Abraham Pierson (1646-1707) in Killingworth , today Clinton (Connecticut) .

1716 Collegiate School moved to New Haven and became in 1718 due to a large donation from Elihu Yale in Yale College renamed.

In 1887 the entire complex of these institutions was renamed Yale University , with Yale College becoming the official name for the so-called undergraduate area of ​​the university.

While the graduate schools long accepted students of both sexes, Yale College was reserved for male students until 1969.

Yale University is home to the beincke Rare Book and Manuscript Library , which has a papyrus collection and a large number of incunabula . The university also includes the Yale University Art Gallery , the oldest university art museum in the western hemisphere.

The Yale School of Architecture has been run as a separate Yale architecture school since 1972. Its director has been the renowned architect Robert AM Stern since 1998 .

In August 2020, an investigation by the Department of Justice (DOJ) concluded that Yale was using illegal discriminatory practices in the application process for students based on skin color and origin. The practices violate Title VI of the Civil Rights Act of 1964, according to the DOJ .

Yale University has a number of well-known student associations. These include Skull and Bones , Scroll and Key , Wolf's Head , Book and Snake, and Berzelius . 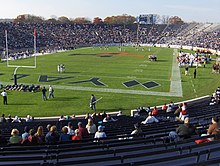 The football stadium holds around 66,000 spectators.

The Yale College sports teams are known as the Yale Bulldogs . They mostly play in the Ivy League , whose eight members, unlike the majority of US universities, do not award sports scholarships. The American football duel against the Harvard Crimson is one of the most famous college rivalries in US sport and is known for short as The Game .

The university regularly achieves top positions in various ratings for academic institutions. As with the other top universities, the exact ranking varies slightly from year to year, with the top international universities always sharing the top 10 to 15 places. For example, Yale ranks third in the US News & World Report 2016 university ranking and fifth according to Forbes 2015 among the best US universities - as it has done every year for the past 16 years. The university is under the prestigious Philosophical Gourmet Report (2014-2015) specialized in philosophy as one of the top five in the US and especially in the fields of ethics and philosophy of the modern period (17th and 18th centuries) as one of the world's best.

Due to the international importance of Yale University, the institution counts alumni from all over the world: