The title of this article is ambiguous. Further meanings are listed under Paul Newman (disambiguation) .

Paul Leonard Newman (born January 26, 1925 in Shaker Heights , Ohio , † September 26, 2008 in Westport , Connecticut ) was an American actor , film director , racing driver and entrepreneur . After his breakthrough in the mid-1950s, he was one of the most popular and successful Hollywood stars for around three decades . In a span of 44 years, he was nominated nine times for an Oscar . In addition to the Oscar for his life's work, which was already awarded in 1986, he received the award a year later for The Color of Money as best leading actor.

Paul Newman was born in Shaker Heights, a suburb of Cleveland , Ohio in 1925 . His Catholic mother came from today's Slovak town Ptičie (then Austria-Hungary ) near Humenné . His Jewish father Arthur Sigmund Newman, of Polish-Hungarian origin, with whom he had a strained relationship, ran a successful sporting goods business. At a young age he gained his first acting experience at a children's theater in Cleveland. In 1943 he volunteered for the US Navy to become a pilot. Since he was not suited to pilot an airplane due to his color blindness , he worked for three years as a radio operator on board a torpedo bomber in the Pacific region. 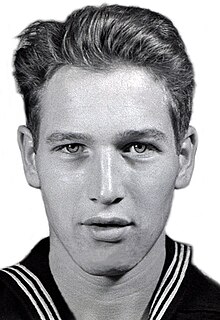 Newman at a political meeting in Menomonee Falls, Wisconsin (1968)

Back in America, Newman met actress Jacqueline Witte in 1947 , whom he married two years later. The young couple earned their living from the sports business Newman had inherited from his father. However, the marriage lasted only a few years. After Paul Newman graduated from Kenyon College in 1949, he sold his shares in the business to his brother a short time later and enrolled at the Yale Drama School in New York to take acting classes. After just one audition at Lee Strasberg's legendary Actors Studio , he was admitted there in 1953 and began his studies with Eli Wallach , Rod Steiger , Julie Harris and Geraldine Page . He made a living from doing live television broadcasts and engagements on Broadway . During this time he met Joanne Woodward , who, like him, was engaged on Broadway as an understudy. He received his first attention for his role as Alan Seymour in the play Picnic , which became a success and earned him his first Hollywood film contract with the Warner Brothers .

In 1954 he played his first film role, the Greek slave Basilius, in the production of The Silver Cup . In retrospect, Newman described this role as a disaster. He was so embarrassed about his costume that he didn't dare look into the camera. At the same time he was doing screen tests with James Dean for Beyond Eden , directed by Elia Kazan , but was not given the role of Aron . His contract allowed him to return to Broadway and star in the lead role in The Desperate Hours with Karl Malden . In 1955 he starred alongside Eva Marie Saint and Frank Sinatra in the live television play Our Town . It wasn't until 1956 that he dared to go in front of the film camera again, this time as boxing champion Rocky Graziano in Hell is in me . This film revealed Paul Newman's star qualities and his athletic body and piercing blue eyes soon made him a sought-after actor in Hollywood. In 1957 he received the Golden Globe for Best Young Actor for The Silver Cup alongside Pier Angeli . In 1958, after divorcing his first wife in 1957, Paul Newman and Joanne Woodward married.

A clever script selection, his versatility and his ambition brought Newman artistic and financial success, so that he soon rose to the ranks of the most sought-after Hollywood stars. The most important and famous films he starred in included The Long Hot Summer (1958), The Cat On A Hot Tin Roof (1958), Exodus (1960), Sharks Of The Big City (1961), The Wildest Among A Thousand (1963) , A Case for Harper (1966), The Torn Curtain (1966), He Was Called Hombre (1967), The Unbending One (1967), Two Bandits (1969), That Was Roy Bean (1972), The Stitch (1973), Flammendes Inferno (1974), Slap Shot (1977), The Verdict - The Truth and Nothing But Truth (1982), The Color of Money (1986), Hudsucker - The Big Leap (1994), Nobody's Fool - Irresistible in the Long Term (1994 ) and Road to Perdition (2002). Many of his early films were directed by Martin Ritt , who played a major role in the discovery and establishment of Newman's screen personality. With producer John Foreman , Newman founded Newman -Foreman Productions in the late 1960s, which spawned several successful film productions. The star made 14 films together with his second wife, Joanne Woodward. The shooting of the film Indianapolis - Risk on Life and Death in 1969 aroused his interest in automobile racing as well as his colleagues James Garner and Steve McQueen .

Inspired by his passion for cooking, he started his own grocery chain Newman's Own, which generated well over $ 200 million and which funded several social projects. He and his wife founded The Hole in the Wall Gang Camp for children with cancer and those with life-threatening blood diseases (awarded the Lego Prize in 1996 ). In memory of his son from his first marriage, who died in 1978, he set up the Scott Newman Foundation, named after him , which is dedicated to the fight against drug abuse among young people.

From the 1960s as an active participant in the civil rights movement, Newman was also politically active. He supported disarmament campaigns during the Cold War and used his popularity to raise funds. He was ranked 19th on President Nixon's infamous “ Enemy List ”, which he once hailed as one of his best accolades.

In 1994 Newman received the Jean Hersholt Humanitarian Award , an award for special humanitarian merits in the interests of the film industry at the Academy Awards. 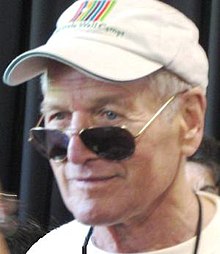 In May 2007 he announced his retirement on the US news program Good Morning America after five decades as an actor. He cited his deteriorating memory and his dwindling self-confidence as reasons. In early June 2008, media reported that Newman had been suffering from lung cancer for several months and was being treated as an inpatient at New York's Sloan Kettering Cancer Center . As before, the actor, who was considered a chain smoker, initially denied reports about his illness. In August, however, his condition worsened so much that he stopped chemotherapy and returned home of his own accord. Newman died on September 26, 2008 at his home in Westport, Connecticut.

He had been married to Joanne Woodward since January 29, 1958 and had five daughters from his two marriages. His son Scott Newman (* 1950) from his first marriage died on November 20, 1978 of an overdose of drugs in combination with alcohol.

A Rolex Cosmograph Daytona reference 6239 owned by Newman was auctioned for the equivalent of 15.3 million euros in October 2017, making it the most expensive wristwatch in the world to date.

In 1979, at the age of 54, Paul Newman took second place in the Le Mans 24 Hours in a team with Rolf Stommelen in a Porsche 935 , although the Porsche was driven almost exclusively by Stommelen. At the age of 70, Newman was a member of the winning team at the Daytona 24 Hours in 1995 . In the following years he was also at the start several times.

Paul Newman founded the Newman / Haas team in 1983 together with the then Lola general importer Carl Haas , the most victorious champ car team after Penske Racing as well as the championship team of:

Paul Newman had been hoping for an Oscar at regular intervals since he and Elizabeth Taylor in The Cat on a Hot Tin Roof in 1958 . He was a favorite nine times. It was not until 1986, however, that he received the Oscar of Honor for his complete works. A year later he received the Oscar for best actor for his role as the aged billiards professional Fast Eddie Felson in Martin Scorsese's The Color of Money , which he did not accept in person.

In addition, various nominations for the above and other film awards.

Newman's German standard dubbing voice was Gert Günther Hoffmann until 1997 , who dubbed him in films such as Zwei Banditen , Der Clou and Die Farbe des Geldes . Wolfgang Kieling or Michael Chevalier represented him in absentia. After Hoffmann left due to illness (died 1997) mainly Otto Mellies and Joachim Höppner took over the synchronization.