Under the Broadway [ bɹɑːdweɪ ] in New York City means the theater district in Midtown Manhattan at Times Square between the 41st and 53rd Street and between the Sixth and Ninth Avenue . There are 41 large theaters in this area . A “large” theater can accommodate 500 or more spectators, most Broadway theaters have well over a thousand seats. Theaters in the “Theater District” of Manhattan and the rest of the city with fewer than 500 seats are now referred to as Off-Broadway or Off-Off-Broadway theaters . Broadway theaters typically do not have a repertoire system, but only show one musical or one play , and this several times a day. The playing time of these pieces is usually not fixed (exception: so-called "strictly limited runs"), but depends on the assessment by critics and the audience. Broadway is also known as "The Great White Way" because of the lavish lighting in the street and square.

The first theater to move from the previous theater district in Herald Square to Times Square was the Empire Theater. The impresario Charles Frohman , who died in the sinking of the Lusitania in 1915 , had the building built in 1893 with around 1000 seats. It was directly opposite the Metropolitan Opera House, which opened in 1883 , at its old location between 39th and 40th Streets.

With Frohman a new era began in many ways. Not only did he own six in New York in 1915, five in London, and over 200 theaters across the United States, but he also changed the nature of the theater business. Together with other businessmen, he founded the Theatrical Syndicate in 1896 . While actors previously designed their tours through the USA according to their own ideas, theater managers, producers and actors have now been able to plan their dates safely in advance. This allowed Frohman and the other theater owners to cast a play with actors according to their own ideas. The result was a system that was later referred to in film as the star system . 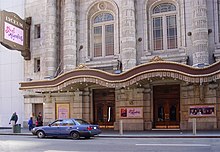 Broadway saw a large number of new theaters between 1910 and 1930. The oldest continuously operating theater from this period is the Lyceum , which opened on November 2, 1903 . It was initially called the New Lyceum Theater as the original Lyceum Theater from 1885 on 45th Street and Broadway was demolished for the new building. It was also the first Broadway theater to have electric lighting throughout, installed by Thomas Alva Edison .

The Great Depression in the 1930s and the rise of talkies brought Broadway into a serious crisis and required a reorientation of the theater. As part of the so-called New Deal , between 1935 and 1939 there was financial aid of over 46 million dollars to finance more than a thousand productions.

The creation of the Tony Awards in 1947 reflected the desire of Broadway theaters to improve the quality of their plays. In the 1940s, new off-Broadway theaters in Greenwich Village began to appear to appeal to new audiences.

Broadway theater died out in the 1980s, but urban development, austerity, and the signing of big names overcame the crisis. In 1988 the New York Landmarks Preservation Commission decided to give most of the historic theaters the status of "Historic Sites".

Broadway's stage industry, traditionally the country's most important and top-selling industry, has always been a primary resource and test track for film material for the Hollywood film industry. Countless Hollywood scripts are adaptations of successful Broadway stage plays.

The personal ties between Broadway and Hollywood are also considerable. Despite the wide differences in the profile of these two professions, many film actors began their careers as stage actors on Broadway, including Groucho Marx , Charlton Heston , Robert Redford , Orson Welles , Katharine Hepburn , Burt Lancaster , James Dean , Marlon Brando , Gene Hackman and Grace Kelly . Others first became known in Hollywood and then occasionally tried their hand at Broadway, such as Elizabeth Taylor and Angela Lansbury .

→ Main article : List of the 100 most popular performances on Broadway

Note: If a theater is currently not showing a play, the next scheduled play is indicated and the date is marked with an asterisk (*) If the next planned piece has not yet been officially announced, the relevant fields will be left blank. The number of available seats refers to the corresponding information in the Internet Broadway Database .