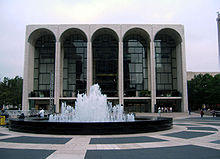 The Metropolitan Opera is a theater company based at Lincoln Center in New York City . It is known colloquially as “Met” and is one of the world's leading opera houses. Peter Gelb has been General Manager since the beginning of the 2006/07 season . 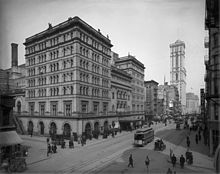 View from the stage of the "old" Metropolitan Opera, 1937

The Metropolitan Opera Company was founded in 1880 and received an opera house built by architect J. Cleaveland Cady and located between 39th and 40th Streets on Broadway . On August 27, 1892, a fire severely damaged the building . After extensive renovation work, the venue was able to reopen and continue to be used until 1966. Then the Metropolitan Opera Company decided to move their headquarters and thus their opera house to their current location. The first opera house was demolished in 1967.

The Metropolitan Opera opened on October 22, 1883 with the opera Faust (German title Margarete ) by Charles Gounod .

A series of world premieres of the works of Giacomo Puccini could be seen in the “old” hall of the “Met”: La fanciulla del West (The Girl from the Golden West) in December 1910 and Ilertrico in December 1918; Il tabarro (The Coat), Suor Angelica (Sister Angelica) and Gianni Schicchi , and in October 1958 Samuel Barbers Vanessa , who was honored with the Pulitzer Prize for Music.

Since the beginning of the 20th century at the latest, the “Met” has been the leading opera house in the world alongside the Vienna State Opera and the Teatro alla Scala in Milan, to which great conductors such as Gustav Mahler , Felix Mottl and from 1908 to 1915 Arturo Toscanini as chief conductor contributed as well Intendants like the Italian opera manager Giulio Gatti-Casazza . As artistic director, he wanted to advance the development of US opera. His 27-year tenure was the longest in the history of the Metropolitan Opera. He was a professional, yet capricious, artistic director. Until his last day he did all business in Italian. Giulio Gatti-Casazza laid the foundation for always engaging the most famous singers in the world in the “Met”. a. Lilli Lehmann , Victor Capoul , the brothers Jean and Édouard de Reszke , Ema Destinová , Nellie Melba , Lillian Nordica , Olive Fremstad , Jacques Urlus and above all the great Enrico Caruso , who made his debut as Duke in Rigoletto in 1903 and continued until December 24, 1920 in the opera Die Jüdin am Haus stayed. That was Caruso's last performance ever. In 1908 Mahler began working at the “Met” with Tristan and Isolde . Lucrezia Bori sang over 600 performances for the Met from 1912 to 1936. Maria Callas was seen and heard for the first time in November 1956 in the Norma opera . From 1958 to 1983 the Swede Nicolai Gedda was the first tenor under contract with the Metropolitan Opera.

In 1966, the Society moved to a new building at Lincoln Center for the Performing Arts , which opened with the world premiere of Samuel Barbers Antony and Cleopatra on September 16, 1966. Twelve other cultural organizations are also located in Lincoln Center. In the new hall there was another world premiere in March 1967 with Mourning Becomes Electra by Marvin David Levy , and with Plácido Domingo (September 1968) and Luciano Pavarotti (November 1968) two other important singers took the stage. Two world premieres followed in December 1991 and October 1992, The Ghosts of Versailles by John Corigliano and The Voyage by Philip Glass .

The Met brings together several ensembles. There is a large symphony orchestra, choir, children's choir and many supporting or leading solo singers. The Met also employs freelance dancers, actors, musicians and other artists during the season. The singers include international and American artists, some of whom are promoted through the in-house Lindemann Young Artist Development Program , an opera studio founded by the then Music Director James Levine in 1980 to promote the next generation of young singers.

In the first season of the Met in 1883/84, Auguste Vianesi , who conducted most of the performances of this season including the opening, was referred to on the theater slips as "musical director and conductor". Thereafter, the Met had no other officially designated music director until Rafael Kubelík in 1973. However, some of the Met conductors held strong leadership positions at the Met. They set artistic standards for the house and influenced the quality and style of performance of the orchestra, but without an official title. There are also many famous guest conductors associated with the Met who are not listed here.

View of the auditorium of the Metropolitan Opera, 2003

The building on the Upper West Side of Manhattan is between Columbus Avenue and Amsterdam Avenue between 62nd and 65th Streets. The hall holds 3900 visitors.

The magnificent curtain of the Metropolitan Opera weighs several hundred kilograms and is decorated with cords made of pure silk and sequins . The new decorative curtain, which replaced the old one in 2005, was made by the German company Gerriets from Umkirch near Freiburg im Breisgau .

The organ of the Metropolitan Opera was built in 1965–1966 by the organ builder Aeolian-Skinner. The instrument has 20  registers (1,289 pipes ) on two manuals and a pedal . The entire pipework is located in a swell box. The actions are electric.

In the “Met” the first opera broadcast was born in radio, which was still in its early years. On January 13, 1910, the double performance of the operas Cavalleria rusticana and Pagliacci with Enrico Caruso and other performers was broadcast to the public. The initiative came from Lee De Forest , an early radio pioneer. The broadcast could also be heard on a ship 20 kilometers away. The New York City audience who needed earplugs to receive broadcasts was small.

The Saturday afternoon performances of the Metropolitan Opera have been heard live on many radio stations in the United States and beyond since Christmas Day 1931. The first piece broadcast was the opera Hansel and Gretel by Engelbert Humperdinck . To finance the radio broadcast, a permanent sponsor was found since 1940, but ended its commitment in 2004. Since then, the Metropolitan Opera Fund has tried to put this program on a secure financial footing with the help of donations.

Selected performances will be broadcast live in the “Metropolitan Opera Live in HD” series in cinemas in the USA and abroad. The transfers achieve good utilization and improve the income situation of the house.

On April 25, 2020, the "Met" broadcast a four-hour gala exclusively online, with guests and musicians being switched on from home due to the coronavirus pandemic .

Technically remarkable was, among other things, the performance of the prisoner's choir from the opera Nabucco by Verdi , where over 50 musicians played the piece in parallel via video conference. 33 live performances and seven pre-recorded pieces were presented, 300,000 spectators from over 162 countries followed the gala live.