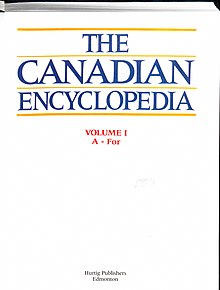 The Canadian Encyclopedia (English) or Encyclopédie canadienne (French) is a national encyclopedia on the subject of Canada .

It contains 14,000 articles in English and French , with each article in one language translated into the other. The encyclopedia covers many areas of life, such as history, culture, events, people, places, politics, art, indigenous people, sports and science.

In 1957 the Encyclopedia Canadiana was published, but it was considered out of date. The publisher Mel Hurtig , a staunch Canadian nationalist, launched a project to create a new encyclopedia in the early 1980s. Editor-in-chief James Harley Marsh recruited around 3,000 authors to write the articles. The first edition was published in three volumes in 1985 and was a great success with 150,000 copies sold in six months. A revised and expanded edition appeared in 1988.

In 1995 the Canadian Encyclopedia was published on CD-ROM . The last printed edition called "Year 2000 edition" was published in English in 1999 and can be viewed on Google Books . It has been published on the Internet in the two main languages ​​of Canada by the private foundation Fondation Historica (Historica Canada) since 2006 and has been continuously updated since then. The website integrates a bilingual encyclopedia of Canadian music, the Encyclopedia of Music in Canada, and a junior edition . Some lemmas consist of selected articles from the weekly Maclean’s .

The online edition is financed by donations.