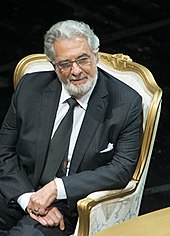 José Plácido Domingo Embil , KBE (born January 21, 1941 in Madrid ) is a Spanish opera singer ( tenor and baritone ), conductor and artistic director . Along with José Carreras and Luciano Pavarotti, he was one of the Three Tenors . In his career he has sold more than 21 million records, including over 2.5 million in his home country alone. His most successful release is the album The Three Tenors in Concert with over 7.2 million units sold. In 2019, around 20 women raised allegations of sexual harassment against Domingo, who admitted his wrongdoing in February 2020.

Plácido Domingo was born as the son of the zarzuela singers Pepita Embil and Plácido Domingo Ferrer and spent his childhood in Mexico from 1949 . His first wife was Ana María Guerra Cué from 1957 to 1958, and he has been married to the soprano Marta Ornelas (* 1935) since 1962. He made his debut in a small role in 1959 (Borsa in Rigoletto in Mexico City ) and on May 19, 1961 as Alfredo in Traviata (in Monterrey , Mexico). From 1962 to 1965 he was engaged with his wife in Tel Aviv ( Israel ) before his real international career began with a successful appearance in 1966 at the New York City Opera in Alberto Ginastera's Don Rodrigo . Since then he has performed at all the major opera houses and opera festivals in the world:

With Francesco Meli and Anna Netrebko at Trovatore , Salzburg Festival 2014

Domingo is considered one of the most versatile tenors and has sung 134 different roles so far . The focus of his broad repertoire is the Italian and French subject with operas by Giuseppe Verdi , Giacomo Puccini , Georges Bizet , Jules Massenet , Pietro Mascagni , Ruggero Leoncavallo , Umberto Giordano and others. One of his star roles was Otello (in Verdi's opera of the same name), recorded several times on record and filmed with him by Franco Zeffirelli . He has also made a name for himself as a Wagner singer, especially as Lohengrin , Siegmund (in Die Walküre ) and as Parsifal . He also sings in Russian (Gherman in Pique Dame ) and has premiered the operas Goya (by Gian Carlo Menotti ), El Poeta (by Federico Moreno Torroba ), Divinas palabras (by Antón García Abril ) and Nicholas and Alexandra (by Deborah Drattell ) participated. Up until very recently he has repeatedly acquired new roles: For example, in 2005 he rehearsed Franco Alfanos Cyrano de Bergerac at the Met and recorded the part of Tristan in Wagner's Tristan und Isolde on CD . In December 2006 and January 2007 he sang the lead role in the world premiere of Tan Dun's latest opera , The First Emperor, at the Met .

Domingo began as a baritone and sang only one baritone role during his tenor career, Figaro in Il barbiere di Siviglia under Claudio Abbado . More recently he sang Simon Boccanegra at the Royal Opera House, Covent Garden (2007), Germont ( La traviata ) and the title roles in Nabucco and Rigoletto . In 2013 he played the role of Count Luna in Verdi's Il trovatore at the Berlin State Opera, and in 2014 also at the Salzburg Festival . From the nineties (for the first time on the occasion of the World Cup in 1990 ) he had performed repeatedly and successfully in large arenas with José Carreras and Luciano Pavarotti ( The Three Tenors ). On the 2002 released album Shaman of Latin Rock - and jazz - guitarist Carlos Santana took over the vocals of the last song, Novus .

In 1996 Domingo became artistic director of the Washington National Opera and was its general director from 2003 to 2011; since 2003 he has been general director of the Los Angeles Opera . He is also active as a conductor , including at the Met , Covent Garden , the State Opera Unter den Linden , the Vienna State Opera , the Bavarian State Opera , the Theater an der Wien and the Bayreuth Festival ( Die Walküre , 2018). In 1993 he founded Operalia , a competition for young opera singers that has been held annually in various cities around the world since then (previously in Paris , Mexico City , Madrid , Bordeaux , Tokyo , Hamburg , San Juan , Los Angeles, Washington , Valencia and in the trinational Lake Constance region).

Domingo is known for its wide variety of charity events and promotions. For example, after the great earthquake in Mexico City , in which he also lost his own family members, he founded a children's village for the orphans of the earthquake. For a year he canceled almost all his duties at the major opera stages and only gave benefit concerts, the proceeds of which went to the orphans and other aid projects in Mexico. Again and again he supports aid projects all over the world, especially those that take on disadvantaged groups. In November 2006, together with the Vienna Philharmonic, he was appointed " Hearing Ambassador" by the Swiss hearing aid manufacturer Phonak . He supports the Hear the World Foundation to protect the hearing and to help the hearing impaired. Since June 2011, Domingo features in common with the world footballers Pele and Johan Cruyff and former Secretary of State Henry Kissinger and former chairman of the FBI Louis Freeh to solve Commission of FIFA .

Domingo campaigned for the revival of little-known works in which he appeared himself, for example at the Theater an der Wien in a Zarzuela ( Luisa Fernanda by Federico Moreno Torroba ), ( Goya by Gian Carlo Menotti ) and Verdi's I due Foscari . In 2016 he also appeared here in the role of Macbeth by Verdi with the finale of the 1847 version. In May 2017, on the occasion of the anniversary of his first appearance at the Vienna State Opera 50 years ago, a gala was held in which Domingo appeared in Verdi's three baritone roles: Renato ( Un ballo in maschera ), Germont ( La traviata ) and Simon Boccanegra . On June 11, 2017, he made his debut there in the role of Marquis Posa in Don Carlo .

In August 2019, allegations of sexual harassment of several female colleagues became known, some of which go back up to 30 years. In response, Domingo resigned as head of the Los Angeles Opera. Several opera house workers reported that Domingo's behavior was an open secret and that "complicated strategies" had been developed to keep Domingo away from female singers.

At the end of February 2020, Domingo admitted personal misconduct and apologized to the women concerned. "I acknowledge full responsibility for my actions," a statement said. But he "never behaved aggressively towards anyone" or did anything to "hinder anyone's career," said Domingo. Domingo admitted that women did not dare to repel the attacks for fear of their careers. An investigation initiated by the Los Angeles Opera into the incidents at the house did not confirm the allegations, but criticized the inadequate communication and lack of awareness of sexual harassment at the opera.

Domingo received several high honors, such as B. Prince of Asturias Prize (Spain, 1991), Kennedy Center Honoree (USA, 2000), Honorary Knighthood (Great Britain, 2002), Commandeur de la Legion d'Honneur (France, 2002), Presidential Medal of Freedom ( USA, 2002), World Award in the World Achievement Award category (2003), Austrian Cross of Honor for Science and Art, 1st Class , etc., and honorary doctorates from the Royal Northern College of Music (England, 1982), the Philadelphia College of Performing Arts ( USA, 1982), Oklahoma City University (USA, 1984), Complutense University Madrid (Spain, 1989), University of New York (USA, 1990), Georgetown University (USA, 1992), Washington College of Chestertown (USA, 2000), Universidad Anáhuac (Mexico, 2001), Fryderyk Chopin Music Academy , Warsaw (Poland, 2003) and Oxford University (England, 2003), Classical Brit Award (England, May 2006, for its 2006 published studio recording Tristan and Isolde and for his life's work) as well as the Great Si Silver Medal of Honor of the Republic of Austria (2007) and the Gold Medal of Honor for Services to the State of Vienna . He is a Bavarian (2005) and Austrian chamber singer . He has been a member of the American Academy of Arts and Sciences since 2000 . He is also an honorary member of the Vienna State Opera and holder of their Ring of Honor (2012) and the Ring of Honor of the City of Vienna (1994). A star on the Hollywood Walk of Fame bears his name. In 2008 he received a "Bambi" and in 2009 he was the first to be awarded the Birgit Nilsson Prize , worth one million dollars . Also in 2009 he received the ECHO Klassik Prize for his life's work at the Semperoper in Dresden . In November 2010 he received the Latin Grammy Award "Person of the Year" for his "professional and philanthropic services". In 2013 he was honored with the Japanese Praemium Imperiale . In 2015 he received an honorary doctorate from the University of Salamanca . In 2020 he was awarded the Austrian Music Theater Prize for his life's work. 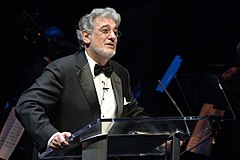 A doll from Sesame Street named Placido Flamingo (also called “Blaffido Flamingo” in the English original) was named after the opera singer and is thus a cocky opera star. Domingo himself appeared as a guest in a duet with the doll.

In the Hollywood film Manolo and the Book of Life from 2014, Domingo speaks the great-grandfather Manolo.