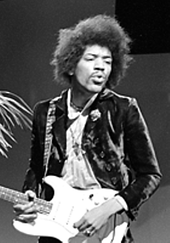 A guitarist is a musician , who as solo artists or musical groups , the acoustic or electrically reinforced plucked guitar playing. Guitarists play in a wide variety of music genres. In a music group, the guitarist can provide rhythm accompaniment ( rhythm guitarist ) or a melody part ( lead guitarist ) or a mixture of both tasks. A guitarist also has the option of accompanying his own singing with the guitar.

As with other musical instruments, there are different ways for guitarists to learn the instrument. The spectrum of training ranges from autodidacts who teach themselves to play by hearing, sheet music and / or with the help of teaching materials in the form of books, CDs or videos, to academically trained musicians who are studying at a conservatory or a music college has completed. The fields of study range from classical guitar to jazz guitar to pop and rock music- oriented major. The university degrees possible in Germany for the guitar subject include the Bachelor of Music and the Bachelor of Music in Education (for teaching).

The field of activity of guitarists ranges from hobby or leisure musicians to semi-professional musicians who pursue another (main) profession in addition to their activity as guitarist, to professional full-time musicians. Professional guitarists can act as self-employed - for example as band members or as freelance studio musicians who are booked by music producers for recordings in recording studios or for live performances as a service provider - but they can also have a permanent position, for example in large orchestras ( radio orchestra , Ensembles of concert halls). The guitarist profession is one of the unprotected professions - this means that neither proof of a professional qualification nor membership of a professional association is required to practice it.

The role of guitarists in musical groups

Until the mid-1930s, the guitar was an exclusively acoustic instrument . Compared to many other acoustically played instruments (e.g. trumpet , piano , drums ), the acoustic guitar is a rather quiet instrument. This is why the sound of the acoustic guitar was easily drowned in larger ensembles (such as the big bands that were very popular at the time ). For this reason, guitarists in big bands were mainly used for accompaniment (in a rhythm section ). Freddie Green , who played in the "All American Rhythm Section" of the Count Basie Big Band, is considered a pioneer of this function .

Since the mid-1930s, when the first series-produced guitars ( electric guitars ) that could be amplified electrically using pickups and guitar amplifiers came onto the market (such as the Gibson ES-150 , which was first sold in 1936 ), the range of uses by guitarists in Orchestras can be expanded by the greater volume made possible in this way. As one of the first musicians, the young jazz guitarist Charlie Christian used the electrically amplified instrument from 1939 for melody lines and solos in Benny Goodman's ensembles and big bands . Jazz musicians Django Reinhardt , Wes Montgomery and Joe Pass are considered to be further pioneers of the guitar .

Since the 1960s, the possible uses of electric guitars in particular have been expanded to include numerous electrically generated sound effects (such as distortion , wahwah and chorus ). This gave guitarists additional opportunities for solo use of their instrument. A revolutionary in this regard was Jimi Hendrix , who was the first to popularize a distorted sound and wah-wah with his music. This development reached a high point with the advent of guitar synthesizers in the 1970s. Well-known guitarists who first used such effects are John McLaughlin , Steve Howe , John Scofield and Pat Metheny .