This article covers the lute instrument in the various styles of jazz music. For the hollow-body guitar type, often colloquially referred to as “jazz guitar”, see archtop .

The beginnings of the jazz guitar / the instrument and its designs

The history of the jazz guitar began in the United States in the early twentieth century with various styles of music developed by the descendants of Africans who had been brought into slavery in previous centuries .

In Afro-American folk music - field hollers , work songs , spirituals , gospel music and blues - the guitar was initially only used as a purely acoustic instrument by singers, soloists and in small ensembles as an accompanying instrument for singing . In larger music groups the guitar was a marginal phenomenon until the 1920s - due to its low volume compared to piano and wind instruments, it was largely determined to be an accompanying instrument belonging to the rhythm group of orchestras and combos. This changed from around the mid-1930s with the newly developed electrical amplification of guitars. Due to the increase in volume gained in this way, the guitar can since then also be used in louder music groups as a melody and solo instrument and often replaced the banjo that had been common in jazz up until then . As a fully-fledged instrument, the guitar gained popularity and importance not only in jazz.

Guitars in the form of construction of string instruments ajar full resonance design - Archtops with hollow body (hollowbody) , with or without pickups - are particularly prevalent to the present day when traditionally oriented jazz guitarists and are therefore often referred to as "Jazz Guitar". They often have a cutaway to make playing above the 14th fret easier.

The historical development of the guitar as a jazz instrument

The guitar in early jazz

Well-known guitarists of the early country blues were Leadbelly and Blind Lemon Jefferson with single-note playing in the blues. Musicians like Blind Blake and Blind Boy Fuller have transferred ragtime to the guitar.

In New Orleans jazz , the instrument appeared from 1920 with the Jazz-O-Maniacs who worked with Louis Armstrong from 1927 : Multi-instrumentalist Lonnie Johnson , played one of the first single-note melodies on the guitar in Jazz- Orchestras. Another New Orleans- born rhythm guitarist and banjo player was Johnny St. Cyr , who u. a. played at Jelly Roll Morton , King Oliver and Armstrong. Lonnie Johnson, who also emerged as a soloist from the beginning, influenced Eddie Lang , the most important guitarist of the Chicago style, in particular. Eddie Condon , chord musician and representative of the Dixieland and Chicago style scenes in New York, is influenced by St. Cyr . On the other hand, Elmer Snowden comes from the Harlem Banjo , which in its playing tradition goes back to ragtime rather than jazz from New Orleans.

The guitar in the big band and swing era

For the guitar as part of the rhythm section in big bands of swing , the name of Freddie Green stands ; This shaped the sound of the basie band with its elastic playing as an elementary part of the rhythm section ; Green is considered to be the "outstanding representative of rhythmic chord playing" (Berendt / Huismann). In order to make the rhythm guitar audible in a big band , louder instruments with a voluminous body were developed. Exemplary models are the Gibson L-5 (since 1924), the Gibson Super 400 or the Epiphone Emperor.

The development of the electrically amplifiable percussion guitar in the USA since the mid-1920s was the prerequisite for the further development of the guitar as a melody instrument in jazz of the 1930s and 40s. Examples of these early electric guitars are the Rickenbacker Spanish-Electric (1935) and the Gibson ES-150 (1936). As early as 1935 Eddie Durham (then guitarist and trombonist with Jimmie Lunceford ) played his first electric guitar solo: Hittin 'the Bottle . He plays the tone sequence largely on one string (single string) . The guitar began to be emancipated from its rhythmic function around 1937. Starting in 1939, Charlie Christian , who was encouraged to play the electric guitar by Durham in 1937, in Benny Goodman's band, made a contribution to the establishment of the electric guitar as an equal melody instrument . Its melody lines are based on the solos of the wind instruments. Musicians like George Barnes , Leonard Ware and in Europe Eddy Christiani should also be mentioned here.

Django Reinhardt made a decisive contribution to the development of the jazz guitar . He is regarded as one of the founders of European jazz. He and the other guitarists of the Hot Club de France such as Baro Ferret came from the banjo and since the early 1930s played acoustic guitars designed by the Italian guitar maker Mario Maccaferri for Henri Selmer , which were often amplified by an internal resonator in the D-Type (Reinhardt never played a guitar with a resonator). Reinhardt also processed influences from flamenco and Russian folklore, and in jazz he refers to Eddie Lang . Michael Dregni Gypsy Jazz: In Search of Django Reinhardt and the Soul of Gypsy Swing Oxford: Oxford University Press 2008. During his lifetime (and still today) he influenced countless guitarists such as Joe Pass , Larry Coryell , Christian Escoudé , Biréli Lagrène and Philip Catherine .

Charlie Christian in particular, who died in 1942 at the age of 25 and was involved in the development of bebop at the sessions in Minton's Playhouse , can be described as formative for the following generation of guitarists. The 1950s and 1960s of jazz were much more influenced by the guitar than the previous epoch, which is not least due to the new possibilities that result from the technical advancement of the electric guitars.

As a full-fledged band instrument, the electric guitar can be used as a combined rhythm and melody instrument in smaller ensembles (trios, quartets) of bebop , with Nat Cole the guitarist Oscar Moore , and with Art Tatum the guitarists Tiny Grimes and later Everett Barksdale . Important jazz guitarists of this period are Tal Farlow , Kenny Burrell , Barney Kessel and Herb Ellis (the last two in trios by Oscar Peterson and as band leaders), Grant Green , Joe Pass , Jimmy Raney and George Benson . In Germany, Coco Schumann and Johannes Rediske should be mentioned.

In cool jazz , the guitar has almost no function as a rhythm guitar: First of all, Billy Bauer ( Tristano School) should be mentioned, who worked with Warne Marsh and Lee Konitz (duo: "Rebecca") as well as Jimmy Raney , Attila Zoller and Jim Hall . With his concentrated, lyrical playing beyond the block chords and the clear, warm sound, Hall's importance for the development of the guitar in jazz is comparable to that of no other guitarist of his generation. 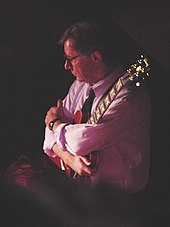 The 1960s were mainly shaped by Wes Montgomery , who set new standards . When, at the end of the 1960s, jazz, which was characterized by puristic sound ideals, was increasingly being replaced by jazz-rock, this also meant a radical change for the jazz guitar. While the style of a Wes Montgomery e.g. For example , it was cultivated by Pat Martino , Joe Pass and George Benson , guitarists like Attila Zoller have been developing a free tonal language since the early 1960s and later Rudolf Dašek . The possibilities in free jazz are made possible by guitarists like Sonny Sharrock , who has already acquired the possibilities of feedback and whose initially aggressive tone incorporates noises and is influenced by the overblown effects of saxophonists John Coltrane , Pharoah Sanders and Albert Ayler , and in Europe especially developed by Derek Bailey . Both have transferred the cluster technique from the piano to the guitar.

In addition, guitarists influenced by rock music such as John McLaughlin and Larry Coryell were innovative for the jazz guitar of the 1970s. The style-setting for the electric guitar in fusion and jazz-rock was John McLaughlin since the late 1960s, heard on the Miles Davis albums In a Silent Way 1968, Bitches Brew 1969 and A Tribute to Jack Johnson 1970 as well as on his Solo albums like Extrapolation (1969) or My Goal's Beyond (1970). In his various projects such as the Mahavishnu Orchestra or Shakti he was one of the pioneering figures in fusion music. A pioneer here is Volker Kriegel in the Dave Pike Set and with his group Spektrum and Jerry Hahn . Guitarists like Terje Rypdal , Allan Holdsworth , Christy Doran , Pat Metheny , Danny Toan or Al Di Meola , but also Claude Barthélemy , Philip Catherine and Toto Blanke continue to follow this thread. In the acoustic field, Ralph Towner, in particular with his solo productions and on the twelve-string guitar, but also James Emery .

The guitarist John Abercrombie is also shaping the style with his album Timeless (1974) with Jan Hammer and his formation Gateway (1975) with Dave Holland and Jack DeJohnette . Other jazz guitarists influenced by the Fusion movement are Mike Stern and John Scofield with Miles Davis from the late 1970s and later in their solo projects, where they recorded influences from world music and electronic music for their music . Also to be mentioned are Leni Stern , Susan Weinert , Andrei Ryabov , Peter Autschbach , Marc Ducret , Michael Sagmeister and John Schröder .

There is also a new influence from the classical guitar. First of all, Dušan Bogdanović should be mentioned here, who merged jazz, classical music and Balkan music, but also Miroslav Tadić . Among the younger guitarists, Pasquale Grasso stands out, who combined the classical approach with the technique of Chuck Wayne . In the present, there is an enormous variety of styles in music and types of instruments. Bill Frisell represents the stylistic diversity in his work. It is becoming increasingly difficult to clearly distinguish it from other musical genres (examples include James “Blood” Ulmer , Frank Zappa , Vernon Reid , Arto Lindsay , Fred Frith and Elliott Sharp ).