Mike Stern (born January 10, 1953 in Boston ) is an American jazz or fusion guitarist.

At the age of twelve the " bebop rocker" started his career as a guitarist. Stern studied at the renowned Berklee College of Music in Boston, where he discovered his love for jazz. Stern became a member of the jazz rock formation Blood, Sweat & Tears on the recommendation of Pat Metheny , with whom he had studied at Berklee , with whom he released two albums. He played for a while in the group of influential drummer Billy Cobham . As part of the band around jazz trumpeter Miles Davis , he can be heard on his albums The Man with the Horn and We Want Miles .

Other important musicians Mike Stern played with in the 1980s and 1990s were: Jaco Pastorius with his band Word Of Mouth , David Sanborn , John Scofield , Bill Frisell , Dave Weckl , Jack DeJohnette , Dennis Chambers , the fusion combo Steps Ahead by Mike Mainieri and Michael Brecker and in 1992 the Brecker Brothers .

Since the 1983 debut Neesh , Mike Stern has released other albums, initially produced by Jim Beard . According to jazz critics such as Ulf Drechsel and Richard Cook, the other albums have mostly not been able to achieve the high level of his live performances and his involvement in projects of other musicians. His albums Who Let The Cats Out? (2006) and Big Neighborhood (2009) were both nominated for a Grammy in the Best Contemporary Jazz Album category.

Stern is married to the German fusion guitarist Leni Stern .

Due to his background in rock and blues, clear references to BB King , Albert King , Jimi Hendrix and Eric Clapton can be heard in Stern's style . He often quotes their licks, and he often uses rock scales such as the minor pentatonic with blue note . His extreme bending and vibrato technique is also a characteristic of rock music. Furthermore, Stern not only alludes to old rock and jazz legends, but also quotes melodies from classical composers such as Johann Sebastian Bach . This can be heard, for example, in the play Play on his DVD Live New Morning, The Paris Concert , where he discusses the theme of Suite No. 2 plays for a few seconds. As a description of his sound on the guitar, he gives a kind of horn as an example. However, it cannot be denied that his treble-muffled, flying chorus tones resemble those of the early Pat Metheny in a certain way, which is possibly due to the fact that the lessons with the younger Metheny also influenced him stylistically during his student days.

In the jazz area he is influenced by numerous role models, Charlie Christian is mentioned here as perhaps the most outstanding example, as Stern has further developed his targeting style, which is independent of scales. The chord tones of the harmonic superstructure are started up chromatically .

For many years, Mike Stern played a Fender Telecaster with a heavy ash body and a humbucker pickup in the neck position. This guitar, which was previously owned by Danny Gatton and Roy Buchanan , was stolen from him in an armed robbery in Boston. For some years now, the manufacturer Yamaha has been building a signature model named after Stern in the Pacifica series, the Yamaha Pacifica MS1511 . 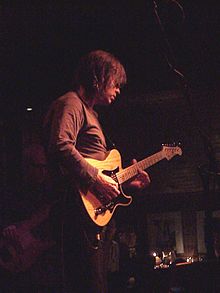