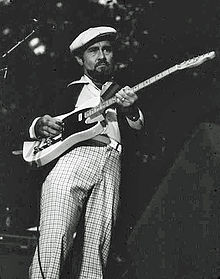 When Buchanan was two years old, his family moved to Pixley, California , where his father found work on a farm. At nine he got his first guitar from his parents. Despite several years of teaching, Buchanan never learned to read music, but played by ear. “His” guitar was the Fender Telecaster , with which he generated wah-wah sounds (even without an additional pedal ) .

At the age of twelve Buchanan got his first engagement in a local band, the Waw Keen Valley Boys . At the age of 16 he moved to live with his older siblings in Los Angeles , where he played with the Heartbeats , along with Spencer Dryden , who later was the drummer for Jefferson Airplane and The New Riders of the Purple Sage . The highlight of the heartbeats was the appearance in the movie Rock Pretty Baby . His next band was Oklahoma Bandstand in Tulsa before playing for three years with Dale Hawkins , who had a hit in 1958 with "My Babe". He then worked for Ronnie Hawkins , The Coasters , Frankie Avalon and Eddie Cochran , among others .

In 1961 Buchanan married Judy Owens and initially lived with her near Washington, DC In the following years Buchanan was not active in the music business. From 1969 he appeared again in smaller clubs in the greater Philadelphia / Washington area. In 1970 he was mentioned in various newspapers and finally in Rolling Stone magazine , not least because he was supposedly the successor to the Rolling Stones guitarist Brian Jones in 1969 . In 1971 a television show entitled "Introducing Roy Buchanan" made him known to a wider audience as The Best Unknown Guitarist in the World .

In the 1970s a number of albums were released, some of which (like the second album ) were quite successful, but he was only able to convince as a guitarist, not as a singer. Numerous tours and concerts followed until the "best unknown blues guitarist" Buchanan withdrew from the record business in the second half of the 1970s. In 1981 he came back, on the album My Babe was the drummer Danny Brubeck , a son of Dave Brubeck to hear. In 1985 a new album, "When a Guitar Plays the Blues", the 13-weeks to be released Billboard - Charts held and a Grammy nomination.

He frequently came into conflict with the law and had drinking problems. On August 14, 1988, Roy Buchanan was arrested for being drunk after a serious argument with his wife. He was later found dead in his cell - hanged with his own t-shirt, according to the official report.

In the 1960s, Buchanan was involved in over 100 records as a studio musician for Freddy Cannon and Leiber / Stoller, among others .