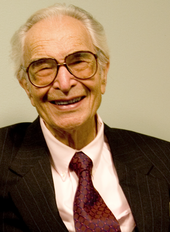 David Warren "Dave" Brubeck (born December 6, 1920 in Concord , California , † December 5, 2012 in Norwalk , Connecticut ) was an American jazz pianist , composer and band leader . He and his quartet led one of the longest lasting and most successful combos of modern jazz and won a new audience for jazz with the intellectual middle class. In his pieces he combined jazz with both European concert music and non-European music. In Brubeck's piano playing, block chords and odd time signatures in the rhythmic structure of his pieces took up a large space. 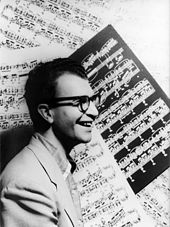 Brubeck grew up on a farm, his father was a cattle breeder. In Ken Burns' jazz film series , he jokingly said his childhood dream was that the cattle he was tending would stop the Benny Goodman Orchestra tour bus so he could audition. His first musical contacts were with country music . Brubeck's mother had studied piano in England with the aim of becoming a concert pianist and was acquainted with Henry Cowell . She also taught piano on the side; from the age of four also Dave, who also learned the cello . Brubeck wasn't particularly interested in learning by any particular method, but rather wanted to create his own melodies - that way he never learned to play by sight.

Brubeck first studied veterinary medicine and switched to music in 1941. He first studied at the College of Pacific , where he also directed an orchestra. In 1942 he moved to Mills College . When one of his professors concluded from his poor sight reading that he apparently couldn't read music, he was nearly expelled from college. Several of his professors stood up for him and pointed out his skills in counterpoint and harmony . Fearing that a scandal might ensue, the school allegedly granted him graduation only on his promise to never teach himself.

In 1943 he was drafted into the army . At the beginning of his military service he had the opportunity to attend lectures with Arnold Schönberg at the University of California . He then served in George Patton's Third Army during the Battle of the Bulge . He played in a band that he put together for a short time - mainly with African American musicians - and quickly gained notoriety and recognition. After three years of military service, he returned to Mills College and in 1946 studied for six months with Darius Milhaud , who encouraged him not only to study classical piano, but also counterpoint and arrangement . He also turned his attention back to jazz.

As a student, Brubeck started an octet , among others with Cal Tjader and Paul Desmond . The octet The Jazz Workshop Ensemble was very eager to experiment, but made only a few recordings and got very few opportunities to perform. A little discouraged, Brubeck started a trio with two members in 1949, which he expanded into a quartet with Desmond in 1951, and spent several years playing exclusively jazz standards. A first success was his appearance at Oberlin College in 1953, later published as Jazz at Oberlin . In 1954, Brubeck was the first musician after Louis Armstrong to appear on a cover picture of Time ; he was awarded in numerous polls. Then he formed the " Dave Brubeck Quartet " with Joe Dodge on drums, Bob Bates on bass, Paul Desmond on saxophone and himself on piano. In the mid-1950s, Bates and Dodge were replaced by Eugene Wright and Joe Morello . In the late 1950s Brubeck canceled several concerts because the club owner asked him to look for a different bassist than the African American Eugene Wright. He also canceled several television appearances when he found out they were planning to keep Wright out of the picture.

In 1959 he performed his brother Howard's Dialogue for Jazz Combo and Symphony with Leonard Bernstein and the New York Philharmonic Orchestra . In 1959, the quartet released the album " Time Out ", which was enthusiastically received by their music label , but was still reluctantly released: It contained exclusively original compositions, and only one of them (Strange Meadow Lark) was consistently in the usual 4/4 Tact. Even so, the record quickly achieved platinum status . In 1961 he recorded pieces from the musical The Real Ambassador with Louis Armstrong, Jon Hendricks , Dave Lambert , Annie Ross and Carmen McRae and gave a concert at the Berlin Wall . At the Berlin Jazz Festival in 1964 he performed his Elementals for quartet and symphony orchestra; in the same year he gave a concert at the White House .

The first Brubeck Quartet separated in 1967; Brubeck appeared from 1968 on with Gerry Mulligan , with whom he also made recordings. At the same time, Brubeck formed a new group with Perry Robinson and Jerry Bergonzi as wind instruments and with his three sons Dan on drums, Darius on bass and Chris on keyboard. In 1972 he renewed his collaboration with Paul Desmond, in 1975/76 they gave a series of reunion concerts with the classical quartet and Mulligan as an occasional guest. After Desmond's death in 1977, Mulligan and Brubeck recorded together for the next six years.

In 1980 Brubeck became a Catholic . He did not call this step a conversion, but rather the beginning of a serious religious commitment. The immediate stimulus for this is likely to have been his work on the mass composition To Hope . He was commissioned by the American editor Ed Murray, publisher of the Catholic weekly Our Sunday Visitor .

Brubeck also dealt with the music of the North American Indians. He gave concerts in around 80 cities a year, usually in 20 European cities in the spring. In recent years his quartet has included alto saxophonist Bobby Militello , bassist Michael Moore (who replaced Alec Dankworth and Jack Six ), and drummer Randy Jones . Dave Brubeck has not given concerts in Europe since 2006.

Brubeck composed jazz standards such as In Your Own Sweet Way or The Duke . Some of his pieces are in unusual time signatures : Pick Up Sticks in 6/4, Unsquare Dance in 7/4 and Blue Rondo A La Turk in 9/8; his longstanding musical partner Paul Desmond wrote what is surely the most famous piece of the Dave Brubeck Quartet, Take Five in 5/4 time. In addition, he also dealt with the writing of works of the Third Stream and other elaborately layered compositions. In addition to symphonic and chamber music works, for example for the Brodsky Quartet , he also composed oratorios, ballet music and sacred music (To Hope! A Celebration) .

With the establishment of the Brubeck Institute , which advocates the spread of modern musical styles, the University of the Pacific honored Dave Brubeck as the namesake of its department for jazz studies . In addition to a Brubeck Summer Jazz Colony , a small two-day Brubeck Festival is held there every year .