The Berlin Jazz Festival (until 1980 Berlin Jazz Days ) is one of the oldest and most respected jazz events in Europe. Founded as the Berlin Jazz Days in 1964 by Joachim-Ernst Berendt and Ralf Schulte-Bahrenberg (with the support of George Wein ), the festival enjoys the reputation of a progressive and at the same time tradition-conscious jazz event with European characteristics. It takes place every autumn and is organized by the Berliner Festspiele . 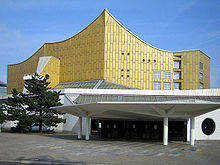 The Jazzfest Berlin was created as part of the Berliner Festwochen , whose director Nicolas Nabokov approached Berendt to organize a jazz festival as part of the 1964 festival. A highlight was the first appearance of the second Miles-Davis quintet (with Ron Carter , Tony Williams , Herbie Hancock , Wayne Shorter ), with the live recording of Miles in Berlin on September 25th. Originally this was supposed to remain a one-off event - Jazz Salons had organized the festival weeks in 1959 and 1961 (with Berendt marginally involved). Berendt, Schulte-Bahrenberg and Wein then approached the Berlin Senate directly and achieved a continuation as an independent event from 1965, with the jazz festival being moved to November and acting independently of the festival weeks. The sponsor was now a newly founded festival company consisting of Berendt, Schulte-Bahring and Wein, which were able to enforce favorable conditions such as the distribution of a profit surplus.

Popularization of jazz through television

The first venue for the Berlin Jazz Days was the recently completed Berlin Philharmonic designed by Hans Scharoun . Berendt was able to win over the TV and radio stations ARD , ZDF , the State of Berlin and the federal government to finance an internationally conceived jazz festival. For the first Berlin Jazz Days with the theme Black and White, Africa-Europe , Martin Luther King sent a foreword in which he emphasized the power of jazz music as a strengthening of the US Civil Rights Movement . Important American musicians who had withdrawn for a while, such as Ornette Coleman , Charles Mingus and Gil Evans , chose the Berlin Jazz Days to return to the stage. The jazz critic Nat Hentoff said that the jazz days were "Europe's, if not the world's leading jazz festival". Berendt oriented each festival on specific themes, for example the encounter with Japan in 1965 and jazz and baroque in 1966 (the Swiss jazz pianist George Gruntz was involved for the first time). Berendt attached great importance to the widest possible range of the jazz styles presented and the use of the festival for experiments. You shouldn't just present well-known jazz musicians, like at the US American festivals, who could also be heard on tours in jazz clubs and concerts. In the first few years, jam sessions were also presented despite other programmatic requirements ; there were considerable lengths and turbulent complaints from the audience.

In 1967 Berendt used the festival to organize the first world music festival of jazz under the motto "Jazz Meets The World": The multi-instrumentalist Don Cherry performed his Symphony for Improvisers , a Bossa Nova and a Jazz meets India concert were given and in “Noon in Tunesia” a group of Bedouin musicians played with George Gruntz , Sahib Shihab , Jean-Luc Ponty , Eberhard Weber and Daniel Humair . In 1968 Don Cherry's Free Jazz split the audience in Eternal Rhythm (with the live recording of the album of the same name from the festival), but the critics were overwhelmingly enthusiastic. Berendt considered Cherry one of the most outstanding representatives of world music .

In 1968, after Peter Brötzmann was dismissed, the Total Music Meeting was founded as a counter-event, which focused entirely on free music and predominantly European musicians.

Berendt saw the jazz festival as a means of relaxing the East-West conflict, also because of Berlin's special location, and invited Eastern European musicians. His commission to compose a composition for Oliver Nelson in 1970 ( Berlin Dialogues for Orchestra ) was symptomatic of this .

In 1972 Siegfried Schmidt-Joos massively attacked Berendt's management of the jazz festival in the Spiegel and its influential role in jazz in Germany ( affairs. Something tapped ). Berendt and Schulte-Bahrenberg resisted, including in the program of the Jazz Festival from 1972, but Berendt's position as director of the Jazz Festival could no longer be held. Berendt's successor was George Gruntz , who was entrusted with the artistic direction between 1972 and 1994. At the very first Festival of Gruntz 1973, which was actually good ( Miles Davis came for the fifth time at the festival), it came to a head when the critical Berlin audience the Duke Ellington band auspfiff (similar to some 1969 before Sarah Vaughan , as The 68 audience didn't like her ball gown, which reminded her of opera singers, and her repertoire of standards). The Ellington Band had previously completed a strenuous concert program in Eastern Europe and was overtired ( Paul Gonsalves nodded off on stage after Take the A-Train ). Ellington had to drop out soon afterwards and was hospitalized with heart problems (the program was continued by the present George Wein in his place at the piano). As Gruntz noted, the Jazzfest was able to book musicians at an early stage thanks to its financial means and their agents used this to organize tours for jazz musicians in Europe beforehand. The behavior of the audience gave the festival a bad reputation in the eyes of many American jazz stars, and Gruntz temporarily had problems with their engagement. Gruntz increasingly focused on fusion and jazz as world music .

In 1978 there was a scandal when Miriam Makeba and Abdullah Ibrahim (Dollar Brand) had not agreed sufficiently before the concert and were unable to present a full evening program. There was unrest and rioting in the audience and sit-ins. The festival management was able to react quickly and invited the approximately 2200 spectators in the Philharmonie to the second evening concert by Makeba and Ibrahim free of charge. Carla Bley then composed Boo to you too for the 1979 festival, alluding to the behavior of the audience . As Gruntz noted in his memoirs, the booing era was over, and he had to hire them for Carla Bly's performance.

In 1980 the conflict between Schulte-Bahrenberg and Gruntz came to a head. After a lawsuit, the Berliner Jazztage had to be called Jazzfest from 1981 and the Berliner Festspiele GmbH took over the management instead . From Gruntz's point of view, Schulte-Bahrenberg was the last remaining representative of the original festival company, who wanted to use the profit distribution stipulated in the original founding agreement in full for an audience-oriented invitation of well-known jazz musicians. Gruntz, on the other hand, wanted to exhaust the budget in order to promote experiments, in keeping with Berendt's original program ideas for the festival.

In the 1980s, the Jazzfest became more popular, its presentations were "stimulating, if not exciting, new, surprising and, on top of that, of an often extraordinary quality - one that was next to nothing known about."

Changing lines from the 1990s

In 2001, the main venue changed from the House of World Cultures to the House of the Berliner Festspiele . The Quasimodo and A-Trane jazz clubs and the Akademie der Künste on Hanseatenweg are also used . The ARD transfers some of the concerts and also funded part of the budget. Nils Landgren ended the management of the festival in November 2011 with a five-day program with artists such as Lizz Wright , Joe Sample , Steve Swallow and Charles Lloyd . From 2012 to 2014 the jazz journalist and music critic Bert Noglik was the artistic director of the Jazzfest Berlin. In 2015 he was followed by the British jazz journalist Richard Williams . Williams made a point of giving a forum for new developments in jazz. From 2018 the concert manager Nadin Deventer will design the musical program.