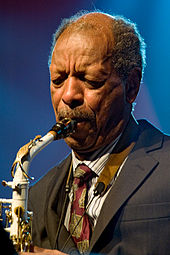 Randolph Denard Ornette Coleman (born March 9, 1930 in Fort Worth , Texas , † June 11, 2015 in New York City ) was an American jazz musician (mainly alto , occasionally tenor saxophone , trumpet and violin ) and composer . Ornette Coleman is considered a pioneer of free jazz and is the creator of "Harmolodics".

Coleman grew up in poor conditions and after the death of his father at an early age as a half-orphan. Coleman got his first saxophone at the age of 14, and from 1944 he taught himself to play the saxophone and read music. He ran away from home at the age of 19 to escape poverty and racial discrimination in the southern United States. Ornette Coleman made ends meet with auxiliary jobs in Los Angeles and in 1950 again self-taught harmony and music theory . Here he also developed his own musical concepts and found supporters in Don Cherry (trumpet), Bobby Bradford (trumpet), Walter Norris (piano), Ed Blackwell (drums), Billy Higgins (drums) and Charlie Haden (bass). He met the latter two in 1958 in Paul Bley's band (piano), which was expanded to include Coleman and Cherry before it became the Ornette Coleman Quartet through Bley's departure.

Together the band played in small clubs in Los Angeles. She got her first record deal by chance, because a record company bought one of Coleman's arrangements, but found no one except his group who could play it. On the mediation of John Lewis Coleman moved to Atlantic Records in May 1959 . After a subsequent engagement in the “Five Spot” jazz club in New York in 1959, the Ornette Coleman Quartet was sure to attract the attention of the jazz scene.

In addition to music, Coleman was also interested in scientific topics from physics , mathematics and chemistry . 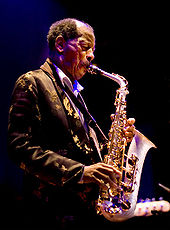 Together with Eric Dolphy (bass clarinet), Don Cherry ( pocket trumpet ), Freddie Hubbard (trumpet), Scott LaFaro (bass), Charlie Haden (bass), Billy Higgins (drums) and Ed Blackwell (drums) - so with a double quartet - Coleman recorded his most famous album Free Jazz: A Collective Improvisation in 1960 . This album acted as the initial spark of atonal avant-garde jazz , whereby it also referred to the origins of jazz in New Orleans in its collective improvisation. In 1961 Coleman broke up his quartet and played in the trio with David Izenzon (bass) and Charles Moffett (drums) for the next few years . He also learned the violin and trumpet in order to use them for tone color effects. Since the early 1960s he has also composed chamber music and since 1967 several symphonic pieces for larger ensembles ( Skies of America , 1972).

Ornette Coleman developed his system of "harmolodics" from free jazz especially since the 1970s. In contrast to the modal game, it is improvised using linear series of intervals. Together with his band Prime Time in particular , Coleman became a pioneer of free funk from the mid-1970s with the help of the harmolodic system , because he combined the "harmolodics" with aggressive rock rhythms and spherical sounds. His album Dancing in Your Head , recorded a. a. with the Master Musicians of Jajouka , was included in The Wire's list of “100 Records That Set the World on Fire (While No One Was Listening)” . In the 1980s, Coleman brought out more records with Prime Time and his classic quartet.

Coleman's recordings from the 1990s, on which he played in a classic jazz quartet (with piano, bass, drums) or in a saxophone-piano duo (with Joachim Kühn ), met with great approval. His last album to date, Sound Grammar , a live recording of a festival appearance in Germany in 2006, was made with the unusual line-up of two bassists and a drummer; for this album he received a Grammy in 2006 .

From Coleman's divorced marriage to the poet Jayne Cortez comes his son Denardo Coleman , who has accompanied him as a drummer since 1966.

Coleman's work started from rather folkloric conceptions of music. Although he always remained an outsider through his deliberate renunciation of virtuosity, Coleman's influence on musicians such as Pat Metheny (with whom he worked several times), John Zorn (tribute album Spy vs. Spy 1989) and Joachim Kühn was lasting. Coleman was of the opinion that no player had the lead and gave instructions to play, rather his concept was based on aesthetic freedom, where anyone could grab the handle at any time. The music theorist Gunther Schuller interpreted Coleman's playing as based on a deep inner logic that enabled Coleman not to have to skip the old musical rules, rather they did not exist for him. Despite a completely different approach, John Coltrane also respected his colleague as a pioneer and even recorded an album ( The Avant-Garde ) with Coleman's compositions and his band in 1960 , which was not released until 1966. Critical remarks, however, came from Miles Davis. He described his trumpet and violin playing as "disrespectful to all other musicians who have mastered these instruments" and he described himself as a "jealous bird" who loved "to sit instructively, ... [although] he doesn't even know what he's talking ".

Ornette Coleman showed closeness to rock music as early as the late 1980s when he produced the album Virgin Beauty ( Columbia ) in 1988 following In All Languages (label: Caravan of Dreams) , in which Jerry García from the Grateful Dead was also involved . In 2002 and 2003 Coleman made further forays into rock music and worked on Lou Reed's adaptation of Edgar Allan Poe's works , The Raven , and Eddy Grant's Hearts & Diamonds . In previous years he had been involved in productions by Yoko Ono , Claude Nougaro , Jamaaladeen Tacuma , Yochk'o Seffer and Joe Henry.

On behalf of his father, Denardo Coleman sued in 2015 for an omission to publish unauthorized session material on the album New Vocabulary .

All sound carriers under their own name