NPR (formerly National Public Radio ) is a public, loosely organized cooperation of radio stations in the USA . It was brought into being as a result of the Public Broadcasting Act of 1967 and established a cooperation between non-commercial radio stations . The connected stations are legally and financially independent. CEO and President is John Lansing.

NPR was formed on February 24, 1970 with 90 public radio broadcasters as registered members. Around 800 stations in the USA are currently taking over part or all of the shell program from NPR.

NPR broadcast its first program, a live broadcast of advice relating to the Vietnam War in the US Senate on April 19, 1971. Two weeks later, the daily NPR news program All Things Considered introduced. In 1979 the Morning Edition was added.

The headquarters are in the capital Washington . Since the end of 2002 there has been a production site in Culver City , California , in order to have a stronger presence on the west coast ( NPR West ).

NPR is not financed through license fees , but mainly through sponsorship of companies and foundations ("underwriting spots"), which are also named within the programs, through donations from listeners to their local station and through the sale of merchandising ( NPR Shop) and broadcast manuscripts. To a small extent, there are also indirect financial grants from the federal government in Washington D.C. - through foundations and subordinate institutions such as the Corporation for Public Broadcasting (CPB) , which make up around one to two percent of the annual budget.

The economic crisis that emerged in 2008 also left its mark on NPR. Since spring the income from sponsoring, which makes up 1/3 of the budget, has been falling. As a result, savings were announced at the end of the year. The programs News & Notes and Day to Day as well as 7% of the staff fell victim to this. Most of the positions that have been eliminated stem from the cancellation of the programs mentioned. Listeners in Europe are also affected as they were able to hear day to day on NPR Worldwide's programming.

Due to further funding gaps, in September 2013 NPR announced a plan to balance the budget within two years. Part of the plan is downsizing around 10 percent of the workforce.

In the blueprint of his budget for 2018, President Trump plans to let the financing of the CPB run out in full. Compared to the 2014 funding plan, NPR lost just 1 percent of its total funding. However, the numerous regional and local NPR partners in rural America would be so badly affected that some would have to cease broadcasting. They mainly supply underprivileged audience groups with non-commercial programs and are financed up to 40 to 50 percent from CPB funds. 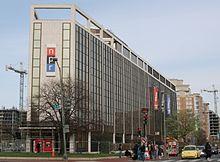 The organization is based in Washington, DC All program content that is not produced by regional NPR stations is produced here.

The structure of NPR is not comparable with public broadcasting in Germany, Austria or Switzerland and can be compared more with professional and socially supported free radios .

The counterpart to NPR on television is the Public Broadcasting Service (PBS).

NPR (or its regional affiliates ) offers its listeners an information and culture-oriented program, comparable to Deutschlandfunk , BBC Radio 4 or RTÉ Radio 1 .

The local NPR stations usually broadcast additional local and regional programs as well as concert recordings (classical, blues, jazz) in the evenings and on weekends; the night program is mostly taken over by the BBC and the Canadian Radio Canada (CBC), in most cases the program is taken over by the BBC World Service . Also shipments are the Deutsche Welle taken.

The stations are free in their programming, e.g. B. A large number of them do not take over The Diane Rehm Show or not live. Since On point is being produced at the same time, selected stations broadcast the other program as a recording, often in the evenings and sometimes only in excerpts.

There are also a number of musical channels that i. d. Usually run by universities. Mostly they are classical or jazz channels. These often only take over the hourly national NPR News and occasionally offer additional regional news produced in-house, while their program is otherwise entirely dedicated to music. Despite the lack of public radio broadcasting in the USA, there is almost nationwide coverage of classical and jazz stations. The omnipresence of jazz stations is a specific feature of the US radio market; there are no corresponding counterparts in the European markets, which are richly supplied with public broadcasting programs.

As of 2017, NPR claims that it reaches more than 37.7 million listeners every week via more than 1000 connected public radio stations. The NPR.org website is being used by a growing audience and reaches 41 million unique users per month.

The flagships of the information offer are Morning Edition and All Things Considered .

No other morning program reaches more listeners nationally than Morning Edition - neither on television nor on the radio. The two-hour program will be produced from 5:00 to 7:00 Eastern Standard Time (EST) and will be broadcast as a feed until 12:00 EST with updates . Most stations repeat one or both hours, so programs can be received from 5:00 am to 9:00 am in many areas of the United States ( 5:00 am to 8:00 am on the West Coast ). Some of the many regional NPR stations also carry regional portions (e.g. Minnesota Public Radio ). The weekend edition broadcasts in all areas between 8:00 am and 10:00 am local time, Weekend Edition (produced from 8:00 am to 10:00 am EST, feeds are broadcast repeatedly until 1:00 pm EST), which offers space for longer contributions.

All Things Considered, NPR's oldest information program, provides an extensive analysis of the day's events. The broadcast will be produced from 4:00 PM to 6:00 PM EST, with updated feeds broadcast until 10:00 PM EST. The program, produced in Washington, lasts approx. 105 minutes, the rest of the airtime is filled with local and regional news. At the weekend there is a one-hour edition (Weekend All Things Considered).

The talk format, which is very popular in the USA, is also served by NPR. Most of the shows come from partner stations. Only Talk of the Nation is broadcast direct from Washington, DC, NPR

The programs mentioned are all “ syndicated ”.

In the US, over 800 NPR stations broadcast almost all of the country and reach 99% of the population. Subscribers to the private Sirius XM satellite radio also receive the special programs NPR Now (news and entertainment) and NPR Talk 123 .

International broadcasting takes place directly via NPR Worldwide (satellite) and indirectly via the American Forces Network (AFN), previously also via the World Radio Network (WRN). NPR Worldwide has been digitally received via the Hotbird satellite throughout Europe, North Africa and the Near and Middle East since 2001 . Previously, the program was broadcast analogously on the Astra satellite 19.2 ° East (1995–2001).

Direct international distribution began in 1995 with the America One program , a cooperation with Public Radio International (PRI) and the Corporation for Public Broadcasting (CPB). After more than two years, the Ericsson sponsored “experiment” ended on March 31, 1998. Without a break, NPR continued to spread on its own - this was how NPR Worldwide was born.

In Africa, South Asia and South Europe, NPR can also be heard via the Worldspace satellite system with mobile receivers, but a paid subscription is required (does not apply to the North Beam from the Worldspace AfriStar satellite).

In Berlin , the National Public Radio operated its own transmitter, NPR Berlin, on the 104.1 MHz frequency from April 2006 to 2017 . The sponsor was T-Systems , and there were regular “underwriting spots” in the program to indicate this. After NPR withdrew , KCRW took over the Berlin frequency from Santa Monica . The station is also an NPR partner and, in addition to its own productions from Berlin, continues to broadcast essential formats from NPR.

There is the possibility of listening to a special program (NPR News) on the website . There are also extensive podcast offers.