This article covers the city in Texas. For additional meanings, see Dallas (disambiguation) .

Dallas ([ ˈdæləs ]) is the third largest city in the state of Texas after Houston and San Antonio and the ninth largest city ​​in the United States . The city has an area of ​​997.1 km 2 and is also the administrative seat of the county of the same name . Dallas has 1.3 million inhabitants (as of 2016) and is the cultural and economic center of the twelve counties of the greater Dallas- Fort-Worth - Arlington area . Dallas is one of eleven world cities in the USA.

The city, founded in 1841, was an important center of the oil and cotton industry due to its strategic location on numerous railway lines . Today the economy is largely driven by the telecommunications , computing , financial services , and transportation industries .

Dallas is the administrative seat of Dallas County . Parts of the city extend into the neighboring counties Collin , Denton , Kaufman and Rockwall .

Dallas has a subtropical climate with mild winters (around 15 ° C) and hot summers (around 35 ° C). However, frost and snowfalls can also occur in winter. Temperatures over 40 ° C are repeatedly reached during the summer months. Every year around 850 mm of precipitation falls. The temperature extremes are between −18 ° C and 45 ° C. Furthermore, the city is located in a tornado-prone area.

Caddo , Native Americans , lived in the area around Dallas before the 16th century part of the Spanish province of New Spain and from Texas was. Today's Dallas remained under Spanish rule until 1821, when Mexico declared independence from Spain. The future Dallas area became part of the state of Coahuila y Tejas in the new nation. The Republic of Texas separated from Mexico in 1836 and remained an independent country for almost ten years. In 1839, after four years in the Republic, John Neely Bryan surveyed the Dallas area, and two years later founded the city of Dallas there. In 1846, the United States annexed the Republic of Texas and Dallas County was created . It is believed that both counties and cities were named after George M. Dallas , the eleventh vice president of the United States at the time. Bryan only said that it was named "after my friend Dallas".

In 1856 Dallas was granted city rights. The city had few slaves , mostly brought in by settlers from Alabama and Georgia . Dallas was only a small town in the Texas border region until after the American Civil War , in which Dallas was part of the Confederate States of America , and did not officially become a city until 1871. The city paid the Houston and Central Texas Railroad a sum of 5,000 US dollars to relocate the planned railway line 32 km west and thus through Dallas. In the following year, the city fathers assured the Texas and Pacific Railroad legal perks if they also relocated their line through Dallas. So in 1873 the two main railroad lines from Texas (north-south and east-west) crossed in Dallas and the future as a commercial center was secured.

In 1890 the Roman Catholic diocese of Dallas was established in the city . The Cathedral Shrine of the Virgin of Guadalupe is the main church of the diocese.

At the turn of the century, Dallas became the largest drugstore, book, jewelery, and liquor market in the Southwestern United States and a trading center for cotton, grain, and buffalo products . It quickly became the world's leading domestic cotton market and was also able to establish itself as the market leader in saddlery and in the construction of cotton ginning machines . Thus, in the early 20th century, Dallas quickly went from being an agricultural center to a center of banking , insurance, and other business.

In 1930, oil was discovered 160 km east of Dallas, quickly becoming the center of the oil industry in Texas and Oklahoma . In 1958 Jack Kilby invented the integrated circuit at Texas Instruments ; thus began the development of the area as a center for the production of high technology. During the 1950s and 1960s, Dallas became the third largest technology center in the United States. This is how companies such as Ling-Tempco-Vought ( LTV Corporation ) and Texas Instruments emerged. In 1957, two property developers ( Trammell Crow and John M. Stemmons ) opened a furniture store that later became the Dallas Market Center, which is now the largest wholesale market in the world.

On November 22, 1963, then- US President John F. Kennedy was shot and killed on Elm Street while his motorized escort drove through Dealey Plaza in downtown Dallas.

In the 1970s and 1980s, Dallas experienced a real construction boom that gave the city center its prominent silhouette. T. was influenced by famous architects. With the move from part of the oil industry to Houston and the burgeoning computer and telecommunications market, Dallas began to focus the core industry on the technology sector. In the later 1980s, the economy collapsed almost completely in Dallas during the savings and loan crisis . Hundreds of shells remained unfinished. Because of the huge global success of the television series Dallas , the city became one of the most prominent US cities in the 1980s. At the beginning of the 1990s, the economy was able to recover significantly. Because of the resident industry in the field of high technology, Dallas was nicknamed "Silicon Prairie" based on California's Silicon Valley .

Dallas is home to the presidential library of George W. Bush , the 43rd President of the United States.

The city and suburbs of Dallas became a bastion of the Democratic Party in the 21st century . In the 2004 US presidential election, 57% of urban voters voted for Democratic candidate John Kerry . For Dallas County as a whole, 49% voted for Kerry and 50% for George W. Bush . In the 2008 and 2012 presidential elections, Barack Obama scored 57% in Dallas County and even higher proportions in the city. In the 2016 election, around 66% voted for Hillary Clinton , compared to just 28% of urban voters for Donald Trump . Dallas County as a whole voted 61% for Clinton and 35% for Trump. In 2004, the openly lesbian Lupe Valdez in Dallas County was elected the only female sheriff in Texas and was re-elected in 2008.

The Dallas metropolitan area generated an economic output of 511.6 billion US dollars in 2016. The gross domestic product per capita is 65,154 US dollars. In a 2014 study, Dallas was ranked 18th among the world's economically strongest metropolitan areas and 6th in the United States. The unemployment rate in Dallas is 3.4% as of May 2018, which is below the national average.

Due to its strategic location on numerous railway lines, the city was an important center of the oil and cotton industry. Today the economy is largely driven by the telecommunications , computing , financial services , and transportation industries .

Dallas is also the second largest center for the US computer game development industry. Many successful development studios have set up in Dallas or the surrounding area, including id Software , 3D Realms , Ensemble Studios , Gearbox Software and Ritual Entertainment . 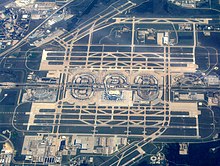 Dallas-Fort Worth International Airport (DFW), located halfway between Dallas and Fort Worth, is the largest airport in the state of Texas , the fourth largest in the United States and the eighth largest in the world. DFW International Airport is larger than Manhattan in terms of area . In 1999 more than 60 million passengers were handled here. Various airlines have their headquarters at DFW International Airport. These include the largest airline in the world, American Airlines . With more than 800 take-offs and landings every day, American Airlines accounts for the majority of flight operations.

In addition to DFW International Airport, there is also Love Field Airport (DAL), which was the city's main airport until the opening of Dallas-Fort Worth Airport.

The Arts District in downtown is home to many cultural institutions. The Dallas Museum of Art , the Dallas Opera , the Wyly Theater of the Dallas Theater Center , the Morton H. Meyerson Symphony Center , the Trammell & Margaret Crow Collection of Asian Art , the Nasher Sculpture Center are particularly noteworthy . The district is also home to the regionally renowned Booker T. Washington High School for the Performing and Visual Arts . Other nationally known museums and galleries are the Dallas Contemporary art gallery with changing exhibitions and the Meadows Museum (in the University Park enclave ), which shows an important collection of Spanish art.

The Kalita Humphreys Theater , built in 1959 by Frank Lloyd Wright , was the former venue of the Dallas Theater Center and has been used by various independent groups since 2009. The Deep Ellum neighborhood became popular as the jazz and blues hub of the American South during the 1920s and 1930s . Musicians such as Blind Lemon Jefferson , Robert Johnson , Huddie " Leadbelly " Ledbetter and Bessie Smith played in the local clubs. Today, many artists live in Deep Ellum, who have their studios in addition to pubs, bars and event venues. The sprayer scene was also able to spread widely in Deep Ellum - numerous graffiti and wall paintings cover tunnels, buildings, sidewalks and streets.

Downtown Dallas is characterized by several tall structures. The tallest structure in the city is the 281 meter tall skyscraper Bank of America Plaza , completed in the mid-1980s . The tallest structure to date was the Renaissance Tower with a height of 270 meters and 56 floors. The Dallas City Hall , in which the city government is located, stands out due to its architecture, which is partly reminiscent of an inverted pyramid. In addition to the high-rise buildings, the skyline is also characterized by the 171-meter-high Reunion Tower , which stands out with its geodesic dome as a tower cage. The Majestic Theater was the first building in the city to be listed in 1977.

Dallas is known for its barbecue specialties as well as Mexican and Tex-Mex cuisine . Famous eateries include El Fenix, Mi Cocina, Bone Daddy's Barbeque and The Mansion on Turtle Creek. Dallas has more restaurants per capita than New York City.

The Texas Rangers (baseball) are based in the suburb of Arlington .

The Cotton Bowl Stadium is the traditional sports stadium in Dallas.

Sister cities of Dallas are

There are friendly relationships with:

→ Main article : List of personalities from the city of Dallas

View of the Dallas Arts District 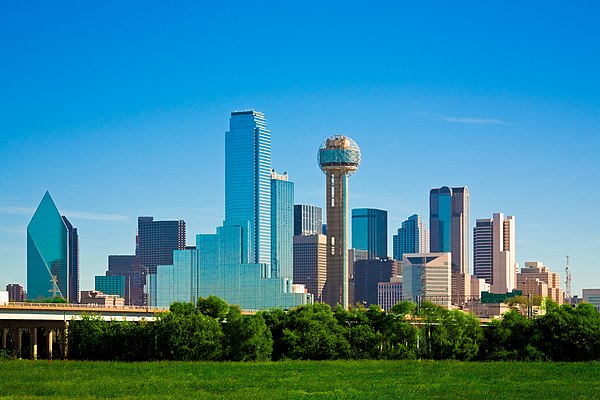