The coastal metropolis is known worldwide for its beer called Tsingtao , which has its origins in the German colonial era. Off the coast of Qingdao in 2008 the sailing competitions were Olympic Games of Beijing held.

Qingdao reached its present size through the incorporation of the former Jimo, Jiaozhou and Jiaonan Counties in 1977 and Laixi and Pingdu in 1984. At the county level, Qingdao now consists of seven boroughs and three urban districts. These are:

According to the first known German-language records, the place was known as the "village of Chingtau-kau". In the following, the term "Tsintau" was initially used. On October 12, 1899, the German name “Tsingtau” was established.

In 2017, almost 5.3 million people lived in the actual urban settlement area of ​​the city. The rest of the population lives in the rural area. Due to advancing urbanization, 7 million inhabitants are expected in the agglomeration by 2035.

Qingdao had been a German colonial trade and navy base since the late 19th century. Efforts to have a base in East Asia can be traced back in Prussia to the year 1859, when a squadron of the Prussian Navy , the Prussian East Asia Expedition, left for East Asia that year .

Since the opening of China in the Opium Wars , trade and naval circles have been interested in providing German trade with China with the necessary military support, without which German merchants would have found it difficult to gain a foothold. Other states, including Great Britain , Russia and France , also established trading bases in China between 1842 and 1899.

In 1896 the imperial government decided to actively pursue the acquisition of a base. The attack on German missionaries, known as the Juye incident , in which two of them were killed, provided the opportunity to dispatch a cruiser squadron of the Imperial Navy under Rear Admiral Otto von Diederichs and to give China an ultimatum to give China a lease area. Given the superior military strength, China gave in. A lease for 99 years was signed on March 6, 1898. ( see: Gunboat Policy )

When it was occupied by German troops on November 14, 1897, Qingdao was a fishing village made of mud huts with a temple built around 1796 for the sky goddess and a 'yamen', the administrative seat in which a Chinese officer sat as head of administration, who was also subordinate to a small military unit .

From 1897 to 1914, Qingdao was under German rule as the capital of the “ German Kiautschou Protected Area ” . Many buildings from this period have been preserved, for example a brewery , a train station, a Protestant church and the governor's residence. The existing buildings and the lives of the residents were documented photographically for the first time in 1903-1906 by Friedrich Behme . West Shandong was one of the scenes of the Boxer Rebellion of 1900, which tried to drive the colonial rulers out of China. In 1913 the city's population consisted of 53,312 Chinese, 2,069 Europeans and Americans, 2,400  soldiers from the garrison , 205 Japanese and 25 other Asians.

The German defenders were taken prisoner of war in Japan . They lived there in several camps and some were not released from captivity until 1920. The most famous camps were called Matsuyama and Bandō .

After the Japanese conquest of Tsingtau, Japanese merchants and tradesmen poured into the city. A Japanese quarter was created in which 17,597 Japanese were already living in 1920, who, like the Germans, had the ambition to build a " model colony ".

According to the provisions of the Versailles Treaty , the colony initially remained in Japanese hands. It was not returned to China until December 10, 1922. In the period that followed, the civil war-like conditions of the warlord era led to economic stagnation.

Under the Chinese national government and after the Second World War , the United States used Qingdao as a naval base at times . This ended in 1949 after the city was captured by the Chinese communists.

In 1986, a submarine base of the Navy of the People's Liberation Army was located near the port .

Qingdao has now become a city of millions. Many old colonial buildings gave way to the building boom that has continued to this day. Many of them were demolished until the 1990s. However, the most important buildings from that time have been preserved and protected by the city. Today Qingdao is proud of the architectural legacy from the German colonial era. Numerous hills in the urban area were leveled to create new building areas. The appreciation for the German architectural style goes so far that in several new building areas, in contrast to the usual high-rise construction, mainly medium-height, “German”-looking houses have been fitted into the green landscape.

The main buildings of the old town

According to a study from 2014, Qingdao has a gross domestic product of 208.7 billion US dollars in purchasing power parity . In the ranking of the economically strongest metropolitan regions worldwide, the city took 52nd place. The GDP per capita is $ 23,281 (PPP). The city employed 2.7 million people. GDP per capita grew rapidly at 10% annually in the period from 2009 to 2014. 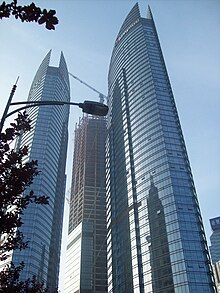 Economically, Qingdao developed very quickly after the opening of China in 1978.

Qingdao is known for the production of fish products, seafood , textiles ( Jean Pierre , Hong Ling etc.), household electronics ( Haier , Hisense , Aocma etc.) and tires ( Goodyear , Shuangxin etc.). The Korean Sejung Musical Instruments Co. Ltd. Established a large-scale production of musical instruments in 2001, which not only produces grand pianos and pianos, but also over 500,000 acoustic and electric guitars annually. The former German brewery is now a global company and now has breweries all over China, parts of Asia and North America. Their beer is sold worldwide under the name Tsingtao . In addition, the Qingdao Beer Festival , unique in China, has been held every year since 1991. It is modeled on the Munich Oktoberfest and attracts numerous tourists and German breweries.

In 2017 , Airbus and a Chinese partner are building a helicopter factory in Jimo , near Qingdao .

The German-Chinese Ecopark is also located in Qingdao .

In a ranking of the most important financial centers worldwide, Qingdao took 33rd place (as of 2018).

As a deep-sea port , Qingdao is important for the oil processing industry and freight traffic for the entire Shandong peninsula. The city's port is the third largest port in China and the eighth largest in the world. It includes the old port area, the Huangdao oil port, the new Qianwan port area and the Dongjiakou port area. The port of Qingdao is considered the world's largest port for iron ore imports, China's most important facility for receiving oil and the country's second most important port for foreign trade. According to the port administration, the total throughput of goods in 2011 was around 370 million tons. In 2012, container throughput amounted to around 14.5 million  TEU , a good 11 percent more than in the previous year. The port will be expanded by 2020 for 4.7 billion euros. After the expansion, the port will replace the previous leader Shanghai and become the largest port in the world.

On December 27, 2010, the Jiaozhou Bay Bridge , which connects Qingdao with Huangdao and Qingdao-Liuting Airport , was completed. With a total length of 42 kilometers, it is the world's longest car bridge over water. The bridge was opened to traffic on June 30, 2011. The Jiaozhou Bay Tunnel , which also connects Qingdao with Xuejia Island in the Huangdao district and is 7.8 kilometers long, 3.95 kilometers of which is underwater, had already been built .

The first section of the Qingdao tram opened on March 5, 2016. The 8.8 km long route has 12 stops . Only a short section of 400 m length runs along the road. A novelty in tram history is the fact that the vehicles were equipped with fuel cells. This made it possible to dispense with the overhead line on sections of the route. 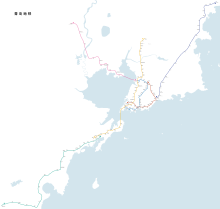 A subway system is under construction. The Qingdao Metro was originally supposed to start operating in the second half of 2014, but after delays in construction, a first section of Line 3, 12 kilometers in length, was not released until December 2015. Another 12.8 km long section of this line with 12 stations was opened in December 2016.

The first section of Line 2 has been in operation since December 10, 2017. It is a 20.4 km long route that connects Zhiquan Lu with Licun Gongyuan and has a total of 18 stops. In the final stage, this line will be 61.3 km long and will have 41 stations.

A total of 16 lines and two feeder lines are planned. The entire route network is to have a length of 836 km and is to be completed around 2050.

The Qingdao Liuting International Airport is used primarily for national calls. It is about 20 km from the city center. The link to Germany has been underlined since 2012 with a direct Lufthansa connection between Frankfurt and Qingdao.

Since the airport has reached the limits of its capabilities, it is to be replaced by a new airport, Qingdao Jiaodong International Airport , around 2020 .

Qingdao is one of the few major seaside resorts in China. The Germans gave the city the nickname Naples on the Yellow Sea . Near the city is the Lao Shan excursion site with the Taoist temple Taiqing Gong . From the German colonial era, the governor's villa, the Protestant church, the Catholic cathedral (completed in 1934), the Zhan Qiao pier , parts of the German bunker system that can be visited and some other colonial buildings are still preserved. However, the unique panorama of the city was partially destroyed by high-rise buildings.

Fushan Bay, just six kilometers from the center of the city, with the Qingdao International Sailing Center, was the venue for the sailing competitions of the 2008 Summer Olympics .

In an annual selection in 2009, Qingdao was voted the most liveable city in mainland China by a Hong Kong- based institute . In addition, the Chinese Institute for Competitive Strength determined in 2012 that Qingdao is the happiest city in China.