Long Beach (English for "Long Beach") is a city in Los Angeles County in the US state of California with 470,130 inhabitants (as of 2016). The urban area has a size of 170.6 km². Long Beach has the seventh-highest population in California and continues to Los Angeles at some distance by the second largest city in the greater Los Angeles.

Before the arrival of European immigrants lived Indians from the tribe of Tongva in the area occupied by Long Beach today. The city was founded in 1880 by William E. Willmore as Willmore City . Willmore failed, however, and sold his land to the Long Beach Land and Water Company , which in 1888 gave the young settlement the name "Long Beach". In 1921, oil was discovered in the Long Beach area and the city grew rapidly. In 1933, an earthquake with a magnitude of 6.4 on the Richter scale shook the city and its surroundings and caused serious damage, killing 120 people.

The 2010 census showed a population of 462,257. The population grew compared to the entire state of California, namely by less than 1000 people. The city's population is mostly made up of the Latino population . They make up around 40 percent of Long Beach's residents. White people with no Hispanic background make up just over 29 percent of the city's residents, which is a small percentage when compared to the United States or California. African Americans make up 13 percent of the population. With a share of around 12 percent, citizens of Asian origin are represented above average. Other population groups are minorities, each with a proportion of less than five percent. The number of households was 163,531, making an average of 2.78 people per household. For every 100 women there were 96.1 men. The median age of Long Beach citizens was 33.2 years.

The port of Long Beach is the second largest in the USA with a handling volume of around 66 million tons per year. The container envelope seal was in 2017 at 7.54 million  TEU . The four artificial THUMS Islands , on which crude oil and natural gas are extracted, are located in the port .

Long Beach is known in civil aviation for two aircraft manufacturers that were based in Long Beach: the Douglas Aircraft Company and the aircraft manufacturer McDonnell Douglas , which was taken over by Boeing in 1997 . The last two Boeing 717 aircraft to be built in Long Beach were delivered on May 23, 2006. After that, commercial aircraft production was stopped at this location. The last C-17 military transport aircraft is to be built and delivered at the site in summer 2015 .

Until 1992, the now vacant dome in the port area housed the aircraft with the largest wingspan in the world at the time, the only example of the Hughes H-4 ("Spruce Goose") of aviation entrepreneur Howard Hughes . Since 1992 it is in the Evergreen Aviation Museum in McMinnville ( Oregon accommodated). 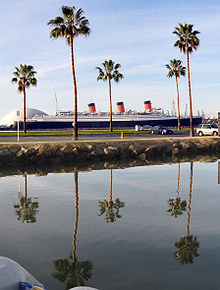 There is a wide range of cultural activities in the city through various museums and the Philharmonie. The Long Beach Blues Festival has been held annually since 1980 .

In 1967 the Queen Mary received her last anchorage in Long Beach harbor. It now serves as a hotel and museum. 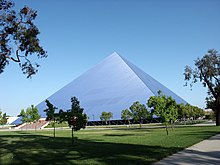 The Walter Pyramid is the sports hall for basketball and volleyball players at California State University Long Beach. It was inaugurated on November 30, 1994 and has a capacity of 5,000. It is 18 stories high and has a side length of 104 meters. In 2005 it was named "Walter Pyramid" in honor of Mike and Arline Walter , who had supported the university with grants for a long time.

The Long Beach Grand Prix takes place annually on the streets of the city around the Convention Center at the harbor and is one of the largest and best-attended racing events in the world. The race was founded in 1975 as a Formula 5000 race and held as a Formula 1 race from 1976 to 1983 . From 1984 to 2007 the race was part of the ChampCar WorldSeries and their predecessor series. Since 2008 the race has been part of the reunited IndyCar Series . The event is the largest automobile road race in the United States, with an estimated 300,000 spectators annually over every three days. Due to its outstanding position in the USA and its character as a race on public roads, the Long Beach Grand Prix is ​​often referred to as the “Monaco of the USA” with reference to the Monaco Grand Prix of Formula 1 . On April 4, 2015, the first Long Beach E-Prix was held on a shortened version of the route .

→ Main article : List of sons and daughters of the City of Long Beach, California