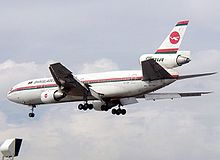 McDonnell Douglas was until its merger with Boeing in 1997, one of the world's largest manufacturer of civil and military aircraft, headquartered in St. Louis in the US state of Missouri .

McDonnell Douglas emerged in 1967 from a merger of the two companies McDonnell Aircraft Corporation and Douglas Aircraft Company . Douglas was active in the civil aircraft market, but suffered from poor liquidity, while McDonnell, which was then focused on military products, hoped the merger would expand its commercial civilian business. The new company continued the production of military aircraft, missiles and civil aircraft. In 1974 the F-15 Eagle and in 1975 the F / A-18 Hornet came . Missile models were the AGM-84 Harpoon , the cruise missile BGM-109 Tomahawk and the Delta launch vehicles. The first joint civil aircraft was the three-engine wide - body aircraft DC-10 .

Commercial aircraft production at the Long Beach site was discontinued on May 23, 2006 with the delivery of the last two Boeing 717 aircraft .

McDonnell Douglas F-15 Eagle of the US Air Force