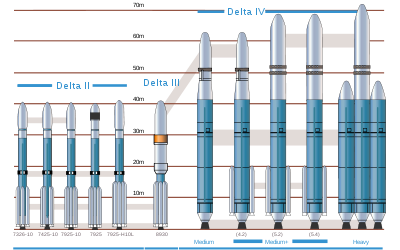 Delta II, III and IV in comparison (Delta I is not in the picture)

The Delta is an American launcher . It was developed by the Douglas Aircraft Company and used the Thor rocket as a basic stage. Over the years the Delta has been continuously modified and expanded, so that today's Delta has little in common with the first models. So rose z. B. the take-off mass from around 50 t in 1960 to over 700 t in 2004, the payload capacity for the geotransfer orbit (GTO for short) rose from 130 kg to 13130 ​​kg in the same period. After Douglas Aircraft Company was bought by Boeing in 1997 , the Delta missiles are now produced and marketed by Boeing. The Delta has been started more than 300 times since 1960 and achieved a reliability of 95%. This makes it one of the most successful rocket models.

Since the Delta is no longer competitive today due to price competition from SpaceX , the last model still on offer - the Delta IV - is to be replaced by the new Vulcan .

A Delta D with an INTELSAT-I satellite (April 6, 1965, Cape Canaveral)

A Delta 900 with the Nimbus E weather satellite from an unusual perspective (December 12, 1972, Vandenberg AFB) 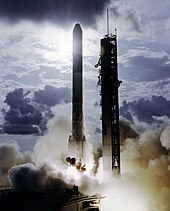 In January 1959, NASA , which had just been established at the time, awarded the Douglas Aircraft Company an order for twelve rockets of the following types:

The rocket was supposed to have a payload capacity of 295 kg for a low orbit and 45 kg for a geotransfer orbit and was to serve as an interim solution in the years 1960-61 before other, more powerful missiles were operational. In addition, only scientific, meteorological and communication satellites should be launched with the rocket. The missile was named Thor Delta, later it was simply called Delta to underline the non-military character of the missile program. Of the first twelve missiles ordered, eleven were successful, so NASA decided to continue using the Delta and ordered another 14 missiles before 1962.

Many versions of the Delta rocket have emerged over the years, the most important of which are described below.

The first flight of a Thor-Delta on 13 May 1960 in which the satellite Echo 1 was to be launched into space, was a failure. But the second flight with the identical Echo 1A satellite on August 12, 1960 was successful. The rocket was soon named Delta and is now often called Delta I.

Since naming the many versions of the Delta had become too complicated, it was decided to introduce a new naming system. Now each version has been assigned a four-digit number, whereby the individual digits have been assigned according to the following key: 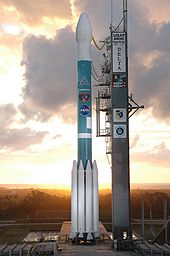 The only difference between the Delta II and the 6000 series was a modified first stage engine and a new solid fuel booster. The first stage got an RS-27A engine, which provided a little more thrust than the RS-27. The Castor IV boosters have been replaced by the slightly larger GEM 40 boosters. The numerical identification system was also used for the Delta II, with a 7 in the first position. In addition, there has been a Delta II with more powerful GEM-46 boosters since 2003, which were also used in the Delta III and were adopted by it. This Delta rockets are by adding the letter H marked. The payload capacity of a Delta II 7920 is approximately 5000 kg for a low orbit and a Delta II 7925 is approximately 1800 kg for the GTO.

The first launch of a Delta II took place on November 26, 1990 with a GPS satellite on board. Since then she has flown more than 100 times, with only two false starts so far, the last on January 16, 1997 (as of early 2005). Since the Delta II has become too weak for commercial communication satellites since the beginning of the 90s , it is now mainly used for launching smaller military satellites, such as. B. used the GPS satellites up to the end of the GPS IIR-M series and to launch NASA research satellites . In addition, many NASA interplanetary spacecraft were launched with the Delta II, such as B. all Mars missions from 1996 to 2003, Stardust , MESSENGER , Deep Impact and many others.

For low earth orbits and planetary missions, versions with just three or four boosters are also available. The Delta II is also used with a smaller third stage when launching some very light spacecraft. This has a Star 37FM drive and weighs only 1063 kg, instead of 2141 kg as the PAM-D upper level. However, the new upper stage massively reduces the payload capacity, which is why it is only used very rarely. This upper level received a 6 as the final digit . So far it has only been used for the missions IMAGE , Stardust, Genesis and Deep Space 1 .

Second stage of a Delta III

Since Delta II has become too small to launch commercial payloads due to the increasing satellite mass, it was decided in the mid-1990s to develop the much more powerful Delta III.

At the first stage of the Delta III hardly anything was changed compared to Delta II: The tanks were shortened so as not to increase the total length of the rocket significantly, and the old GEM-40 solid fuel boosters were replaced by the slightly longer and wider GEM-46, also called GEM LDXL (Large Diameter Extended Length). Delta III received a new, high-energy second stage powered by a Pratt & Whitney RL-10 B2 engine. RL-10B2 used liquid hydrogen and oxygen as fuel and delivered a thrust of 110 kN. The engine is a variant of the RL-10 engine of the Centaur upper stage, which also has a thrust nozzle with extendable parts. This makes it easier to integrate the stage into the rocket, but still offers increased efficiency after the stage separation and subsequent extension of the nozzle to the full length. The exhaust nozzle, which is made of carbon fiber composite materials, is manufactured by SEP in France . The stage also differs from the Centaur in that its tanks maintain stability even without pressurization, which is not the case with the Centaur. The diameter of the hydrogen tank of the second stage is 4 m, that of the oxygen tank below is 2.4 m, which corresponds to the diameter of the Delta II. In addition, the rocket received a new, more spacious payload fairing with a diameter of 4 m. As a result of all these measures, the payload capacity of the Delta III increased to 3810 kg for the geotransfer orbit, more than double that of a Delta II. The numerical designation system also applies to the Delta III, with an 8 in the first position and an 8 in the third 3 for the new second stage. NASA, on the other hand, would use a 3 in the first place according to their new nomenclature .

The first launch of a Delta III took place on August 27, 1998 and ended shortly after take-off with the rocket exploding. The next start on May 5, 1999 was also a failure. It was not until the third launch on August 23, 2000 that the payload reached an orbit, which, however, was lower than expected, so that this launch was only to be assessed as a partial success. All three missiles flew in the 8930 version . 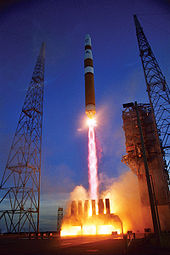 On November 20, 2002, the first Delta IV took off from Cape Canaveral . Delta IV was created as part of the US Air Force's Evolved Expendable Launch Vehicles program to replace the older missile types. A completely new first stage was designed for the Delta IV, which is powered by a newly developed Rocketdyne - RS-68 - rocket engine. The engine burns liquid hydrogen with liquid oxygen (LH2 / LOX). The first stage was named CBC (Common Booster Core) and formed the basis for all versions of the Delta IV. The second stage of the Delta IV was largely taken over from the Delta III.