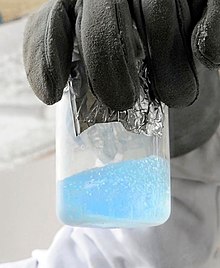 Liquid oxygen in a beaker .

Liquid oxygen (industrial, aerospace , and shipping and LOX for English L iquid Ox yGen ) is the liquid form of the element oxygen .

Warning notices on a LOX tank that supplies a hospital: danger from cold and fire, no approach or smoking

Liquid oxygen is used in large quantities for industrial and medical purposes . It is produced from the oxygen contained in the air using the Linde process by fractional distillation , is an industrial product and is commercially available.

As an oxidizing agent, liquid oxygen is a common fuel for rockets with liquid rocket engines, which are mainly used today in the space industry, usually with kerosene or liquid hydrogen as the propellant to be oxidized. In this function it is a cheap and non-toxic oxidizing agent and generates a strong specific impulse . It was used in the first rockets such as the V2 (then under the name "A-Stoff") and later in the engines of Redstone , R-7 Semyorka , Atlas and in the main engines of the Space Shuttles . Newer rockets also use liquid oxygen as an oxygenator, e.g. B. the Ariane 5 and the Falcon 9 . In the past, liquid oxygen was also used in ICBMs . Modern ICBMs do without them because the cryogenic properties and the need to regularly replenish the evaporated liquid oxygen negatively affect the operational readiness of the missiles.

In the past, liquid oxygen was also used to manufacture explosives (" Oxyliquit ").

Liquid oxygen is cryogenic and can become very brittle on contact with materials. It is also a strong oxidizing agent , stronger than gaseous oxygen, because excited singlet oxygen increases in concentration in the liquid phase . Reducing agents , especially organic materials, therefore burn quickly and strongly in liquid oxygen or can even detonate unexpectedly on contact with liquid oxygen , such as oils , fats and asphalt , but also inorganic substances such as phosphorus or magnesium . Systems for the use or storage of liquid oxygen must therefore be completely free of grease and oil.

At −196 ° C (77 K), nitrogen has a lower boiling point than oxygen (−183 ° C, 90 K), so that oxygen from the air can condense on liquid nitrogen lines and react spontaneously with organic material. Liquid nitrogen and liquid air are enriched with liquid oxygen when stored open because the oxygen in the air condenses on their surface.

Liquid oxygen is cryogenic, has a pale blue color and is strongly paramagnetic . It has a density of 1.141 g / cm³ (at boiling temperature and normal pressure) and is moderately cryogenic. Freezing point : 50.5 K (−222.65 ° C), boiling point : 90.188 K (−182.96 ° C) at normal pressure. Liquid oxygen expands by a factor of 860 when it evaporates and warms up to room temperature. It is used as a source of oxygen for breathing in some commercial and military aircraft.

The tetra-oxygen (O 4 ) molecule was first predicted by Gilbert N. Lewis in 1924, who proposed the molecule as an explanation for why liquid oxygen does not obey Curie's law . Computer simulations indicate that although there are no stable O 4 molecules in liquid oxygen, O 2 molecules combine in pairs with antiparallel spins to form transient O 4 units.

Louis Paul Cailletet and Raoul Pictet succeeded in observing droplets of liquid air and thus demonstrated that air can be liquefied. The droplets obtained, however, evaporated spontaneously. Only Karol Olszewski and Zygmunt Wróblewski Florenty succeeded in 1883 at the Jagiellonian University in Poland First stable liquefaction of nitrogen , carbon dioxide and oxygen.