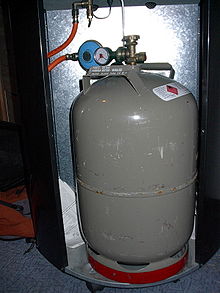 Gas bottle filled with propane , connected to a gas catalytic furnace with a pressure reducer

As a liquefied liquefied gases by cooling or compression referred to, either at atmospheric pressure due to the evaporation enthalpy with appropriate thermal insulation remain cold and fluid (for example, oxygen and nitrogen in the corresponding gas cylinders or tanks), or to remain liquid, standing under pressure ( for example, propane and butane in lighters, camping gas bottle or larger storage tanks of heating systems).

In common parlance is often understood to mean only LPG LPG (of English. Liquified Petroleum Gas ), that is, short-chain hydrocarbons such as propane and butane and mixtures thereof, at room temperature and low compression (<10  bar remain) liquid.
The name NGL (from Natural Gas Liquids ) includes all hydrocarbons contained in natural gas with the exception of methane . They therefore also include ethane , which is still very similar to methane in terms of its physical properties and is usually not contained in LPG, but rather is added back to processed natural gas.

LPG differs from liquefied natural gas , LNG (from Liquefied Natural Gas ), and liquid biomethane , LBM (from Liquefied Biomethane ). They mainly consist of fossil methane (approx. 90 to 98  % by volume ) or climate-neutral biomethane (up to 99.8%), which are liquefied by cooling to −161 to −164 ° C and transported and stored at this temperature .

Liquefied petroleum gas (LPG) is produced in crude oil refining and in the production of crude oil and natural gas and is mainly used as a fossil fuel . In addition to heating and cooking, it is also used as fuel for vehicles with gasoline engines . The mixed gas is therefore also called LPG or camping gas . It is also used as a real propellant for spray cans; specially prepared, it is also used as a CFC- free refrigerant in refrigerators and air conditioning systems.

Liquefied petroleum gas (LPG) is not transported through pipelines , but rather with large ocean-going vessels, small inland vessels, rail tank cars and road tankers to the retailer or to the end-user's liquid gas tank or the autogas filling station. These versatile transport options result from the fact that propane and butane remain liquid at ambient temperature and comparatively low overpressure.

Liquid gas consists of one or more easily liquefied hydrocarbon compounds (C m H n ) with three or four carbon atoms. These can be:

Often it only consists of propane and butane (e.g. LPG and camping gas). 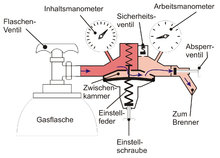 Functional diagram of a pressure regulator

LPG is in the gaseous aggregate state , a higher density than air. It is transported and stored under pressure . At room temperature, the gas liquefies at a pressure of around 8 bar, the volume of the liquefied material being reduced to around 1 ⁄ 260 . In a closed pressure vessel, there is a pressure equilibrium between gas and liquid ( vapor pressure ). Gaseous liquid gas is highly flammable and forms explosive mixtures with air. The explosion limits are between 1.5 and 11  % by volume in the air , depending on the hydrocarbon mixture .

The boiling point depends on the mixing ratio. For a propane-butane mixture at an ambient pressure of 1 bar, it is between −42  ° C (pure propane) and −0.5 ° C (pure butane).

Transports must have a dangerous goods label according to ADR ( UN number 1965 and Kemler number 23 ).

As a fuel gas for generating heat

Liquid gas is used for heating and cooking, among other things. For this purpose, it is stored by the consumer in liquid gas storage containers (volume a few hundred to several thousand liters), which are filled by tank vehicles. In many areas in Europe it can be found, especially in rural areas, for heating purposes in single-family houses. Small liquid gas networks are also common, in which gaseous liquid gas is fed into the houses to be supplied from a central liquid gas storage tank in a low-pressure network. Compared with heating oil, liquid gas as a heating energy source ensures significantly less fine dust and slightly lower CO 2 emissions.

In the household, for example in gas grills, gas bottles with a filling weight of 5 kg, 11 kg or 33 kg are mostly used. It is used in small quantities in gas cylinders or in gas cartridges , for example when camping for cooking and grilling , for heating in caravans or mobile homes. Cooking with liquefied gas is very common in France, southern Europe and many other countries around the world, in contrast to Germany, where this is not practiced very much. While butane is used for bottled gas in southern Europe , in Germany propane is filled into the large camping gas bottles. A mixture of butane and propane is also used in the small camping gas cartridges. Pure butane, which is often used as a lighter gas in commercially available lighters , has the disadvantage that it remains liquid at temperatures below −0.5 ° Celsius ( boiling point ) even at normal atmospheric pressure. With the lighter, hand warmth is enough to achieve a sufficient increase in temperature.

In Germany, too, cooking with a gas bottle (up to a maximum of 16 kg) is permitted in the kitchen, provided that all safety regulations and installation and acceptance by an expert (in accordance with TRF Technical Rules for Liquid Gas 2012) are observed.

Furthermore, burners are operated with liquid gas for a wide variety of applications, for example

In air conditioning systems , liquid gas is used as a refrigerant instead of the ozone-depleting CFCs .

A mixture of propane and butane as autogas or LPG available at gas stations and by specially-equipped gasoline engines used as fuel. The mixing ratio varies depending on the country, season and provider. This liquid gas is pumped into the vehicle tank via special connections at ambient temperature and a pressure of 10 to 12 bar.

LPG storage tank installations are classified installations for the industrial safety regulations , they must repeatedly by a Therefore, before commissioning and in certain periods approved body to be examined. The provisions of the Industrial Safety Ordinance regarding explosion protection must also be observed.

Special measures are required when working below ground level (cellar and the like), since liquid gas is heavier than air and can collect as a "lake". Floor openings (manhole covers, hatches, basement exits) must also be included in the safety assessment.

The transport of liquid gas is regulated by the ADR regulations.

In Germany, restrictions specifically for garages have officially been lifted; corresponding signs are irrelevant here. The ordinances are not uniform within Austria, as they fall within the competence of the federal states .

In Germany, there is still the so-called Technical Rule for Liquid Gas (TRF) for liquid gas , which summarizes the state of the art and the relevant, recognized rules of technology. In it, the requirements for the placing on the market, installation and operation of liquid gas systems from the applicable regulations and standards, e.g. Pressure Equipment Directive, Industrial Safety Ordinance (BetrSichV) and their technical rules (TRBS), DIN EN etc. have been taken over, summarized and implemented.

Lighter gas has a narcotic effect when inhaled. The reason for this is a lack of oxygen in the brain, which can lead to fainting or even the cessation of breathing - with potentially fatal consequences. The neurotoxic effect leads to cardiac arrhythmias as well as damage to the brain and nervous system.