This article is about the chemical compound. For the different meanings of the names Eitan / Etan / Ethan see Eitan .

Ethane (standard language ethane ) is a chemical compound that belongs to the alkanes (saturated hydrocarbons ). It has the molecular formula C 2 H 6 and is a colorless and odorless gas that is mainly used for heating and combustion purposes. The ethyl residue (-C 2 H 5 ) is derived from this . Along with methane, ethane is a main component of natural gas . 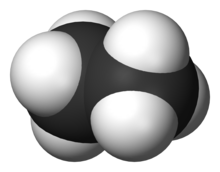 Ethane has two conformations , they differ in their energy, which in this case is called the torsional energy , by about 12.6 kilojoules per mole . It is highest in the ecliptic conformation and is therefore unstable. It is lowest in the staggered conformation, which is therefore energetically preferred. The energy of all other conformations lies between these two extremes.

The torsional energy of the ethane molecule is small compared to the thermal energy at room temperature, so that it is in constant rotation around the CC axis. However, it "locks" in the staggered conformation at regular intervals, so that around 99 percent of all molecules are close to the energy minimum. The transition between two adjacent staggered conformations takes an average of 10 −11 seconds (see also the conformation of ethane ).

Solid ethane exists in several modifications . When ethane is cooled under normal pressure, a cubic, crystallizing shape is initially created, in which the molecules can rotate around their longitudinal axis, which is why it is a plastic crystal . With a slight further cooling, a metastable modification occurs at around 89.9 K, which crystallizes in the monoclinic system.

Not inconsiderable amounts of ethane can be found in natural gas and swamp gas , but only traces are found in the atmosphere. The relatively large amounts of methane and ethane on earth are mainly due to their forms of life and the decomposition of organic matter. But they also arise without the presence of life forms in the presence of hydrogen and carbon, since they are very simple compounds.

It can be produced on a laboratory scale by Kolbe electrolysis of acetic acid or potassium acetate .

When inhaled, ethane causes increased breathing and heart rates. Furthermore, inhalation in large quantities leads to numbness in the limbs, insomnia, mental confusion, loss of coordination and memory as well as hyperventilation. When ingested, it causes nausea and vomiting. Because ethane is usually stored in liquid form at low temperatures, escaping ethane can cause frostbite. Ethane is extremely flammable.

It forms explosive mixtures between 2.7 and 15.5 percent air volume, with the most ignitable mixture containing 6.5 percent by volume of ethane. The flash point is −135 ° C, the ignition temperature is 515 ° C.

Ethane is burned with the natural gas for heating purposes in combustion systems; it has a calorific value of 64 MJ / m³ (47 MJ / kg). It also serves as a raw material for the synthesis of ethene , acetic acid and other chemical compounds. Ethane is also used as a refrigerant (R 170) in refrigeration and air conditioning systems.

Ethane burns to water and carbon dioxide when oxygen is added :

Ethane is split into hydrogen and ethene :

A very high temperature (> 700 ° C) is necessary for the reaction to take place.