This article explains the geometric solid tetrahedron; for the large sculpture of the same name in Bottrop see Tetrahedron (Bottrop) .

The (also, especially southern Germany , of ) tetrahedron [ tetraeːdər ] (from ancient Greek τετρα- tetra- "four" and ἕδρα HEDRA or transferred "seat", "chair", "back", "side face"), even tetrahedron or four flat , is a body with four triangular faces . It is the only convex polyhedron ( polyhedron , polyhedron ) with four faces .

However, the word is rarely used in this general sense. Usually the tetrahedron is the regular tetrahedron with equilateral triangles as side surfaces , which is a Platonic solid.

The general tetrahedron is called a three-sided pyramid , triangular pyramid , disphenoid or three-dimensional simplex depending on its symmetry .

Because of its high symmetry - all corners , edges and surfaces are similar to one another - the regular tetrahedron is a regular polyhedron . It has

In detail belong to the tetrahedral group

The even permutations form a subgroup of the tetrahedral group , the so-called alternating group

(the point group T or 23). Sometimes the term tetrahedron group is only used for these, excluding reflections .

The tetrahedron is the only Platonic solid that is not point-symmetric and in which every corner is opposite a surface .

By connecting the center points of the area you get a tetrahedron again (see figure). One therefore says: the tetrahedron is dual to itself , in short: self-dual . The side length of the inscribed tetrahedron is one third of the original side length.

With the help of these two tetrahedra bodies can be constructed that also have the tetrahedron group as a symmetry group . So you get for example

See also the example below.

Two tetrahedra in the cube have an octahedron as a three-dimensional intersection and a star tetrahedron as a union .

The tetrahedron can be inscribed in a cube ( hexahedron ) in such a way that its corners are at the same time cube corners and its edges are diagonals of the cube surfaces (see illustration). The volume of this cube is three times the tetrahedral volume . The 8 corners of the cube form two disjoint sets of four corners each, which correspond to the two possible positions of the tetrahedron. 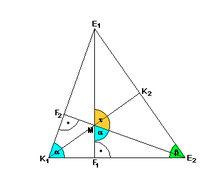 Elevation of a tetrahedron

The dihedral angle between two side faces of the regular tetrahedron  is 70.53 ° ( ).

The connecting lines between the center of the tetrahedron and two corners each   enclose an angle of = 109.47 ° ( ).

This is known as the tetrahedral angle and it plays an important role in chemistry , for example in the geometry of the methane molecule.

The sizes of the specified angles can be determined by using trigonometric functions (see obtuse angle ). To do this, consider the sectional figure of the tetrahedron (see illustration) with one of its six planes of symmetry .

Square cross-section through a tetrahedron

The regular tetrahedron can be cut in two so that the cut surface is a square . The resulting parts of the tetrahedron are congruent to each other.

If the cutting plane through a regular tetrahedron is parallel to one of the four side surfaces , then the cross-section results in an equilateral triangle .

Embedding the tetrahedron in a cube provides an easy way to construct a regular tetrahedron. If we denote the vertices of the cube at the base and as well as the overlying points with , and so form and and and respectively, the corners of a tetrahedron. If one considers z. If, for example, in a three-dimensional Cartesian coordinate system, the cube whose corners have the coordinates and , the corners are obtained for the first tetrahedron

The edges are: and . The side faces are the triangles and .

The second tetrahedron has the corners

The three-dimensional intersection of these two tetrahedra is that of the points and certain octahedra . Their union is the star tetrahedron . Its convex hull is therefore the cube .

Calculation of the regular tetrahedron

For pyramids and thus for the tetrahedron applies

therein is the base area (equilateral triangle)

and the height of the pyramid

For the surface area of the tetrahedron (four equilateral triangles) applies

The height of the pyramid can be determined using the following right-angled triangle.

The following applies to the height of the equilateral triangle

and according to the Pythagorean theorem

This angle, marked with , has its apex at one edge of the tetrahedron. It can be determined using the following right triangle.

The side lengths of this triangle are (see picture in formulas ): side height as a hypotenuse, pyramid height as a large cathetus and part of the side height (see heights ) as a small cathetus.

According to the Pythagorean theorem,

This angle, marked with , has its apex at one corner of the tetrahedron. Angle can be determined using the following right triangle.

The side lengths of this triangle are (see picture in formulas ): pyramid edge as hypotenuse, pyramid height as large cathetus and part of the side height (see heights ) as small cathetus.

This angle, marked with , has its apex at the center of the tetrahedron. The angle can be determined using the following right triangle.

The side lengths of this triangle are (see picture in formulas ): Umkugelradius as a hypotenuse, half the edge length as a large cathetus and half the edge distance as a small cathetus .

Nets of the regular tetrahedron

Animation of a tetrahedron network

The tetrahedron has two nets (see figures). That means there are two different ways to unfold a hollow tetrahedron by cutting open 3 edges and spreading it out in the plane . The other 3 edges connect the 4 equilateral triangles of the network. To color a tetrahedron so that no neighboring faces are the same color, you need 4 colors.

The tetrahedron has an undirected planar graph with 4 nodes , 6 edges and 4 regions assigned to it. This is the complete graph K 4 . It is 3- regular , that is, 3 edges proceed from each node, so that the degree is 3 for all nodes. In the case of planar graphs, the exact geometric arrangement of the nodes is not important. However, it is important that the edges do not have to intersect. The nodes of this tetrahedron graph correspond to the corners of the tetrahedron. 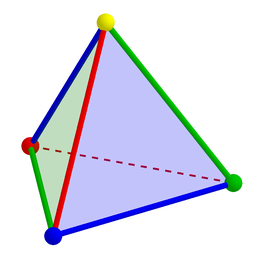 The nodes of the tetrahedral graph can be colored with 4 colors in such a way that neighboring nodes are always colored differently, because all nodes are neighboring. This means that the chromatic number of this graph is 4 (see node coloring ). In addition, the edges can be colored with 3 colors so that adjacent edges are always colored differently (see illustrations). This is not possible with 2 colors, so that the chromatic index for the edge coloring is 3 (the picture on the right illustrates this coloring).

The tetrahedral graph is self-dual .

To determine the number of colors required for the areas or areas, the dual graph is helpful, which in this case is itself a tetrahedral graph with 4 nodes , 6 edges and 4 areas. The nodes of this graph are assigned one-to-one (bijective) to the areas of the original tetrahedral graph and vice versa (see bijective function and figure above). As already mentioned, the nodes of the dual tetrahedron graph can obviously only be colored with 4 colors so that neighboring nodes are always colored differently. From this it can be concluded indirectly: Because the chromatic number is 4, 4 colors are necessary for such a surface coloring of the tetrahedron or a coloring of the areas of the tetrahedron.

Node coloring of the tetrahedral graph 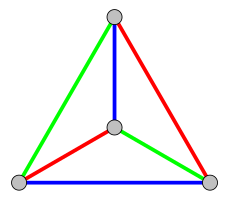 Edge coloring of the tetrahedral graph

Area coloring of the tetrahedral graph

The 3 cut edges of each network (see above) together with the corners ( nodes ) form a spanning tree of the tetrahedron graph . Each net corresponds exactly to a spanning tree and vice versa, so that there is a one-to-one ( bijective ) assignment between nets and spanning trees. If you consider a tetrahedron network without the outer area as a graph , you get a dual graph with a tree with 4 nodes and 3 edges and the maximum node degree 3. Each area of ​​the tetrahedron is assigned to a node of the tree. The 2 graph-theoretic constellations (see isomorphism of graphs ) each occur once.

The tetrahedral graph has 6 Hamilton circles , but no Euler circles . 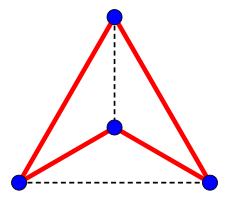 Terahedral graph with one of the 6 Hamilton circles

The three-dimensional Euclidean space can be completely filled with Platonic solids or Archimedean solids of the same edge length. Such three-dimensional tiling is called room filling . The following space fills contain tetrahedra:

Although the tetrahedron is not a stone of a parquet flooring of the room, it occurs in the cubic crystal system (see above). 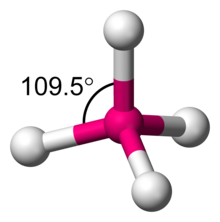 In chemistry , the tetrahedron plays a major role in the spatial arrangement of atoms in compounds . Simple molecular shapes can be predicted with the VSEPR model . The four hydrogen atoms in the methane molecule are arranged tetrahedrally around the carbon atom , as this is how the bond angle is greatest. The carbon atoms in the diamond lattice are also arranged in a tetrahedral manner, each atom is surrounded by four other atoms. The carbon atom is then after the orbital model in sp 3 - hybridization .

The tetrahedron also gave the Tetra Pak its name because of its original shape.

Further technical applications are based on the structure that results from the lines pointing from the tetrahedron center into the four corners of the room:

A tetrahedron in the general sense, i.e. a body with four sides , is always a three-sided pyramid , i.e. with a triangle as base and three triangles as sides, and therefore also has four corners and six edges. Since it has the smallest possible number of corners and sides for a body in space, it is called three-dimensional simplex or 3- simplex in technical terms . The two-dimensional simplices are the triangles.

In a tetrahedron can also by a point and the three vectors are described to adjacent points. If you denote these vectors with , then the volume of the tetrahedron is calculated with , i.e. the amount of the spat product .

The sum of the normal unit vectors pointing uniformly outwards or inwards , which are multiplied by the content of the surface on which they stand, is the zero vector , because

Calculation of any tetrahedron

A tetrahedron has 6 edges. A triangle is defined by specifying three side lengths. Each additional edge can be freely selected within certain limits. If there are 6 independent pieces of information on the size of edges or angles , you can use them to calculate the remaining edges or angles that are missing.

The following equations based on determinants of symmetric matrices can also be used to calculate the volume :

Because every tetrahedron is a pyramid , the following equation applies to the volume , the area of the base and the corresponding height :

Interior angles of the triangles

The interior angles of the triangles are determined using the law of cosines . For example, the inside angle of the base opposite the side applies

The dihedral angle at the edge is

Here is the volume of the tetrahedron and and the area of the triangles adjacent to the edge .

The interior angles of the three neighboring triangles are used to calculate the solid angles in the corners of the tetrahedron :

The coordinates of a regular - simplex can be defined as a set in -dimensional Euclidean space :

For example , there is an equilateral triangle that is spanned by the points in three-dimensional space .