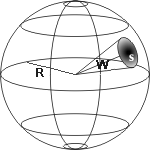 Solid angle in a sphere with radius R

The solid angle is the three-dimensional equivalent of the (for the plane defined) angle . It describes the proportion of the total space that z. B. lies inside a given cone or pyramid jacket .

The solid angle is defined as the area of a part of a spherical surface divided by the square of the radius of the sphere:

The partial area can be of any shape. Vectorially written as a surface integral is

Contrary to what the picture might suggest, the shape of the area is not important. Every outline shape on the spherical surface with the same area defines a solid angle of the same size. If you put a half-line (also called a ray) through each point of the outline with the center of the sphere as the starting point, you get a geometric figure that illustrates the solid angle. (This is comparable to the representation for an angle in the plane: two half-lines with a common starting point.)

Although the solid angle is a quantity of the dimension number , it is usually given in the unit steradian (sr) for clarity ; this corresponds to the radian measure with the unit radian (rad) for a plane angle. A solid angle of 1 sr encloses an area of ​​1 m 2 on a sphere with a radius of 1 m . Since a whole spherical surface has the area , the corresponding full solid angle is

The use of an auxiliary unit of measurement for a quantity of the dimension number has the advantage, as in many areas, in particular also in the case of solid angles, that the unit used shows which physical quantity is meant. In contrast to the luminous flux (lm), the luminous intensity (cd = lm / sr) shows its dependence on the solid angle through the occurrence of the steradian in the unit. The light intensity thus denotes a luminous flux that is dependent on the solid angle.

If you choose a circle as the outline shape on the spherical surface, you get the canonical solid angle. The solid angle then forms the jacket of a straight circular cone with the center of the sphere in the tip.

The full, flat opening angle of the cone can be converted into the solid angle:

The solid angle of a spherical triangle is steradian, depending on its interior angles .

A solid angle from a Cartesian polar coordinate segment

In a spherical coordinate system , the solid angle can be defined very clearly, since there is no radial variable. Two meridian angles φ 1 , φ 2 and two latitude angles γ 1 , γ 2 determine a surface element on a spherical surface. The corresponding solid angle is:

Three vectors starting from a point P , and define a general triangle. For the spanned solid angle with the vertex P applies:

This representation was given and proven in 1983 by Oosterom and Strackee.

Solid angle of a pyramid 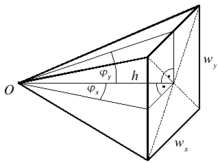 To the solid angle of a pyramid

The special case of the solid angle with a rectangular and flat outline corresponds to the geometric shape of a pyramid, the origin being exactly perpendicular to the center of the flat rectangle, see Fig. Illustration. This solid angle occurs z. B. when calculating the étendue of optical systems with rectangular apertures.

It can be calculated very easily using the Oosterom and Strackee formula. With the pyramid bases and as well as the height h we get:

The symbol »das« ( TeX , Unicode U + 2222 spherical angle , no HTML entity ) is available for the formula set , which can be found in the Unicode block Mathematical Operators . The sign corresponds to the Anglo-American customs, in the European set of formulas a confusingly similar sign is common for the flat angle . \sphericalangle