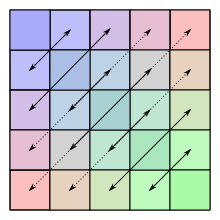 Symmetry pattern of a symmetric (5 × 5) matrix

In linear algebra , symmetric matrices are used to describe symmetric bilinear forms . The representation matrix of a self-adjoint mapping with respect to an orthonormal basis is also always symmetrical. Linear systems of equations with a symmetrical coefficient matrix can be solved efficiently and numerically stable . Furthermore, symmetrical matrices are used in orthogonal projections and in the polar decomposition of matrices.

Symmetric matrices have applications in geometry , analysis , graph theory and stochastics, among others .

for applies. A symmetrical matrix is ​​therefore mirror-symmetrical with respect to its main diagonal , that is, it applies

where denotes the transposed matrix .

Examples of symmetric matrices with real entries are

Generally symmetrical matrices have the size , and structure

Classes of symmetric matrices of any size are among others

With a symmetrical matrix, only the entries on and below the diagonal need to be saved

Due to the symmetry, a symmetrical matrix is clearly characterized by its diagonal entries and the entries below (or above) the diagonals. A symmetric matrix therefore has at most

Likewise, the product of a symmetrical matrix with a scalar is again symmetrical. Since the zero matrix is ​​also symmetric, the set of symmetric matrices forms a subspace

of the die space . This subspace has the dimension , wherein the standard dies , and , in a base form.

to get voted. The skew-symmetrical matrices then also form a sub-vector space of the matrix space with dimension . The entire -dimensional space can consequently be expressed as a direct sum

of the spaces of symmetric and skew-symmetric matrices.

In particular, for a symmetrical matrix , all of its powers with and therefore also its matrix exponential are again symmetrical. For any matrix , both the matrix and the matrix are always symmetric.

where is the associated transformation matrix. However, matrices that are similar to a symmetric matrix do not necessarily have to be symmetric as well.

If a symmetric matrix is invertible , then its inverse is also symmetric again, because it holds

For a regular symmetric matrix therefore all powers are with symmetrical again.

Symmetric matrices with real entries have a number of other special properties.

A real symmetric matrix is always normal because it holds

A real symmetric matrix is always self-adjoint , because it holds with the real standard scalar product

for all vectors . The converse is also true, and every real self-adjoint matrix is ​​symmetric. Regarded as a complex matrix, a real symmetric matrix is ​​always Hermitian because it holds

wherein the adjoint matrix to and the conjugated matrix to be. Thus real symmetric matrices are also self-adjoint with respect to the complex standard scalar product .

The unit circle (blue) is transformed into an ellipse (green) by a real symmetrical (2 × 2) matrix. The semi-axes of the ellipse (red) correspond to the amounts of the eigenvalues ​​of the matrix.

The eigenvalues ​​of a real symmetric matrix , that is, the solutions of the eigenvalue equation , are always real. Namely , a complex eigenvalue of with the corresponding eigenvector , then applies the complex self-adjointness of

After for is, it must hold and the eigenvalue must therefore be real. It then also follows from this that the associated eigenvector can be chosen to be real.

In every real symmetric matrix, the algebraic and geometric multiples of all eigenvalues ​​match. If namely is an eigenvalue of with geometric multiplicity , then there is an orthonormal basis of the eigenspace of , which can be supplemented by to an orthonormal basis of the total space . With the orthogonal basic transformation matrix, the transformed matrix is ​​obtained

as a block diagonal matrix with the blocks and . For the entries of with , namely, with the self-adjointness of and the orthonormality of the basis vectors

where represents the Kronecker delta . Since, by assumption, there are no eigenvectors for the eigenvalue of , there can not be an eigenvalue of . According to the determinant formula for block matrices, the matrix therefore has the eigenvalue exactly with algebraic multiplicity and, due to the similarity of the two matrices, with it .

In a symmetrical matrix, the eigenvectors (blue and violet) with different eigenvalues ​​(here 3 and 1) are perpendicular to each other. Applying the matrix, blue vectors are stretched by a factor of three, while purple vectors keep their length.

The eigenvectors for two different eigenvalues ​​of a real symmetric matrix are always orthogonal . It is again true with the self adjointness of

Since and were assumed to be different, it then follows . Therefore, an orthonormal basis des can be formed from eigenvectors of . This means that a real symmetric matrix can even be diagonalized orthogonally, that is, there is an orthogonal matrix with which

applies. This representation forms the basis for the principal axis transformation and is the simplest version of the spectral theorem .

Due to the diagonalizability of a real symmetric matrix, the following applies to its track

and for their determinant accordingly

The rank of a real symmetric matrix is ​​equal to the number of eigenvalues ​​not equal to zero, i.e. with the Kronecker delta

and thus equal to the spectral radius of the matrix. The Frobenius norm results from normality accordingly to

If is a real symmetric matrix, then the expression becomes

According to Courant-Fischer's theorem , the Rayleigh quotient provides estimates for the smallest and the largest eigenvalue of a real symmetric matrix of the form

for everyone with . Equality applies precisely when an eigenvector is the respective eigenvalue. The smallest and the largest eigenvalue of a real symmetrical matrix can accordingly be determined by minimizing or maximizing the Rayleigh quotient. The Gerschgorin circles , which have the form of intervals for real symmetric matrices, offer another possibility for estimating eigenvalues .

Equality is fulfilled if the matrices and can be diagonalized simultaneously in an ordered manner, that is, if an orthogonal matrix exists such that and hold. The Fan inequality represents a tightening of the Cauchy-Schwarz inequality for the Frobenius scalar product and a generalization of the rearrangement inequality for vectors.

represents an orthogonal sum with respect to the Frobenius scalar product. Namely, it holds

for all matrices and , from which it follows. The orthogonality of the decomposition also applies to the real matrix space .

the two eigenvalues . There are also complex symmetric matrices that cannot be diagonalized. For example, the matrix possesses

decompose into a unitary matrix , a real diagonal matrix and the transpose of . The entries in the diagonal matrix are the singular values of , i.e. the square roots of the eigenvalues ​​of .

If there is a -dimensional vector space over the body , then every bilinear form can be determined by choosing a basis for through the representation matrix

describe. If the bilinear form is symmetrical , i.e. if it applies to all , then the representation matrix is also symmetrical. Conversely, every symmetric matrix defines by means of

a symmetrical bilinear shape . If a real symmetric matrix is also positive definite, then it represents a scalar product in Euclidean space .

If a -dimensional real scalar product space , then every linear mapping can be based on the choice of an orthonormal basis for through the mapping matrix

represent, where for is. The mapping matrix is now symmetrical if and only if the mapping is self-adjoint . This follows from

Is again a -dimensional real scalar product space and is a -dimensional subspace of , where the coordinate vectors are an orthonormal basis for , then the orthogonal projection matrix is on this subspace

write with a lower triangular matrix with all ones on the diagonal and a diagonal matrix . This decomposition is used, for example, in the Cholesky decomposition of positively definite symmetric matrices to calculate the solution of the system of equations. Examples of modern methods for the numerical solution of large linear equation systems with sparse symmetrical coefficient matrices are the CG method and the MINRES method .

an orthogonal matrix and a positive semidefinite symmetric matrix . The matrix is the square root of . If regular, then positive is definite and the polar decomposition is clearly with .

Quadrics can be described by symmetric matrices

A quadric in -dimensional Euclidean space is the set of zeros of a quadratic polynomial in variables. Each quadric can thus be used as a point set of the form

are described, where with a symmetric matrix, and are.

be made. According to Schwarz's theorem , the Hessian matrix is ​​always symmetrical. Depending on whether it is positive definite, negative definite or indefinite, there is a local minimum , a local maximum or a saddle point at the critical point .

An undirected edge-weighted graph always has a symmetric adjacency matrix

given and thus also always symmetrical. Matrices derived from the adjacency matrix by summation or exponentiation, such as the Laplace matrix , the reachability matrix or the distance matrix , are then symmetrical. The analysis of such matrices is the subject of spectral graph theory .

If a random vector consists of real random variables with finite variance , then is the associated covariance matrix

the matrix of all pairwise covariances of these random variables. Since for holds, a covariance matrix is ​​always symmetric.

Tensors are an important mathematical aid in the natural and engineering sciences, especially in continuum mechanics , because in addition to the numerical value and the unit, they also contain information about orientations in space. The components of the tensor refer to tuples of basis vectors that are linked by the dyadic product “⊗”. Everything that is written above about real symmetric matrices as a whole can be transferred to symmetric tensors of the second order. In particular, they too have real eigenvalues ​​and pairwise orthogonal or orthogonalizable eigenvectors. For symmetric positive definite tensors of the second order, a function value analogous to the square root of a matrix or the matrix exponential is also defined.

The statements about the entries in the matrices cannot simply be transferred to tensors, because with the latter they depend on the basic system used. Only with respect to the standard basis - or more generally an orthonormal basis - can second order tensors be identified with a matrix. In particular, for a symmetric second- order tensor T with respect to an orthonormal basis, the same applies to the entries in its coefficient matrix

for all possible combinations of i and k . In general, however, this is not the case.

For the sake of clarity, the general representation is limited to the real three-dimensional vector space, not least because of its particular relevance in the natural and engineering sciences. Every second order tensor can be with respect to two vector space bases and as a sum

to be written. During the transposition , the vectors are swapped in the dyadic product . The transposed tensor is thus

A possible symmetry is not so easily recognizable here, in any case the condition is not sufficient for the verification.

Even with tensors of higher order, the basis vectors in the tuples are swapped during transposition . However, there are several possibilities to permute the basis vectors and accordingly there are various symmetries for higher level tensors. In a tensor fourth stage is represented by the notation te i-vector with the k-th vector of the reversed, for example,

When transposing " ┬ " without specifying the positions, the first two vectors are exchanged for the last two vectors:

Symmetries exist when the tensor agrees with its somehow transposed form.