Axis reflection as an example of a linear mapping

A linear mapping (also called linear transformation or vector space homomorphism ) is an important type of mapping between two vector spaces over the same field in linear algebra . In the case of a linear mapping, it is irrelevant whether you add two vectors first and then map their sum, or map the vectors first and then add the sum of the images. The same applies to the multiplication with a scalar from the basic body.

One then says that a linear mapping is compatible with the combinations of vector addition and scalar multiplication . The linear mapping is thus a homomorphism (structure-preserving mapping) between vector spaces.

Be and vector spaces over a common basic body . A mapping is called a linear mapping if all and the following conditions apply:

The two conditions above can also be summarized:

For this goes into the condition for the homogeneity and for the one for the additivity. Another, equivalent condition is the requirement that the graph of the mapping is a subspace of the sum of the vector spaces and .

A mapping is linear if it is compatible with the vector space structure. In other words: linear mappings are compatible with both the underlying addition and scalar multiplication of the domain of definition and value. The compatibility with the addition means that the linear mapping receives sums. If we have a sum with in the definition area, then this sum is valid and thus remains in the value area according to the illustration:

This implication can be shortened by putting the premise in . This is how you get the demand . The compatibility with scalar multiplication can be described analogously. This is fulfilled if it follows from the connection with the scalar and in the definition range that the following also applies in the value range:

After inserting the premise into the conclusion , one receives the demand .

Two sets of importance when looking at linear maps are the image and the core of a linear map . 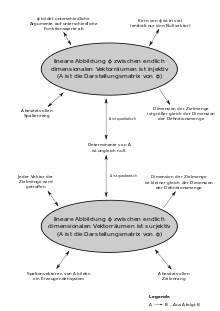 Summary of the properties of injective and surjective linear mappings

Here are the coordinates of the vector with respect to the base . His image is given by

If one assigns to each element of a base of a vector from arbitrarily, so it is possible with the above formula to a linear mapping, this assignment clearly continue.

If the image vectors are represented with respect to a base of , this leads to the matrix representation of the linear mapping.

Are and finite, , , and are bases of and from where, each linear mapping may by a - matrix are presented. This is obtained as follows: For each basis vector from , the image vector can be represented as a linear combination of the basis vectors :

The -th column contains the coordinates of with respect to the base .

With the help of this matrix one can calculate the image vector of each vector :

For the coordinates of respect so true

This can be expressed using matrix multiplication:

The matrix is called the mapping matrix or representation matrix of . Other spellings for are and .

Image and core are related via the set of dimensions. This states that the dimension is equal to the sum of the dimensions of the image and the core:

In functional analysis in particular , one considers linear mappings between infinite-dimensional vector spaces. In this context, the linear mappings are usually called linear operators. The vector spaces considered mostly still have the additional structure of a normalized complete vector space. Such vector spaces are called Banach spaces . In contrast to the finite-dimensional case, it is not sufficient to investigate linear operators only on a basis. According to Baier's category theorem , a basis of an infinite-dimensional Banach space has an uncountable number of elements and the existence of such a basis cannot be justified constructively, i.e. only using the axiom of choice . A different basic term is therefore used, such as orthonormal bases or more generally shudder bases . This means that certain operators such as Hilbert-Schmidt operators can be represented using "infinitely large matrices", whereby infinite linear combinations must then also be permitted.

Monomorphism
A monomorphism between vector spaces is a linear mapping that is injective . This applies precisely when the column vectors of the representation matrix are linearly independent.

Epimorphism
An epimorphism between vector spaces is a linear mapping that is surjective . This is the case if and only if the rank of the representation matrix is equal to the dimension of .

Isomorphism
An isomorphism between vector spaces is a linear mapping that is bijective . This is exactly the case when the display matrix is regular . The two spaces and are then called isomorphic.

Endomorphism
A endomorphism between vector spaces is a linear map, in which the spaces and are equal to: . The representation matrix of this figure is a square matrix.

Automorphism
An automorphism between vector spaces is a bijective linear mapping in which the spaces and are equal. So it is both an isomorphism and an endomorphism. The display matrix of this figure is a regular matrix. 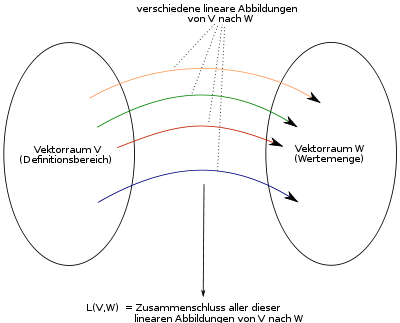 again is a linear mapping and that the product

an isomorphism in the matrix space . The vector space thus has the dimension .

If you consider the set of linear self-mappings of a vector space, i.e. the special case , then these not only form a vector space, but also an associative algebra with the concatenation of mappings as multiplication , which is briefly referred to as

A linear mapping is a special case of an affine mapping .

If the body is replaced by a ring in the definition of the linear mapping between vector spaces , a module homomorphism is obtained .