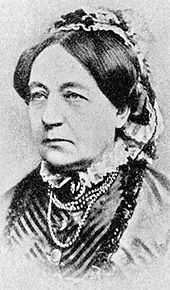 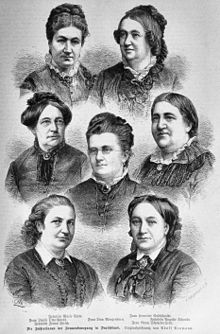 “The leaders of the women's movement in Germany” in the gazebo in 1883. Louise Otto-Peters in the middle row on the left.

Birthplace of Louise Otto-Peters in Meißen

Louise Otto was the youngest of the four daughters of the court director Fürchtegott Wilhelm Otto (1776–1835) and his wife Charlotte Otto, b. Matthäi (1781-1835). She grew up in the middle-class wealthy household of her father, who was not only court director, but at times also senator of the city of Meissen. After she received her confirmation in 1834, she was denied further schooling. Her eldest sister and only brother died early, their parents succumbed to pneumonia in 1835 within a few months; at the age of 16 Louise Otto became an orphan. At first she stayed with her two older sisters in their parents' house in Meißen through the care of an aunt. She earned her livelihood mainly from the inheritance and her literary, later more journalistic activities.

As a young woman in Oederan in 1840, Louise Otto got to know the oppressive living conditions of working-class families in the thriving industrial town. When she published a poem about it "Die Klöpplerinnen" in the Oederaner Stadtanzeiger she caused great outrage. Her first novel, Ludwig the Waiter , was published in 1842, and in the same year she published a letter to the editor in the Sächsische Vaterlandsblatt . In it she declared “The participation of women in the interests of the state is not only a right, but also a duty.” In doing so, she supported the politician and editor of this paper, Robert Blum (1807–1848), who addressed the question of the current political position raised by women. Her second novel "Kathinka" was published in 1844, in which, just as in the first, she was very much based on the views of the French writer George Sand (1804–1876). Two years later, in 1846, her clearly socially critical novel Schloss und Fabrik came out, in which she described the bitter plight of industrial workers and their revolt. The experience of the bloody suppression of an uprising in Leipzig was the initial spark to campaign for the rights and support of the workers , but also their women. This novel was banned by the censors immediately after its publication and it was only released again when Louise Otto was ready to defuse some “dangerous passages”. During this time, she intensified her socially critical engagement and published numerous socially critical articles, mostly under the pseudonym "Otto Stern", as women with such public activities at that time found it very difficult to be accepted. In this work she repeatedly made two demands with great emphasis: firstly, to open up the world of work to women and, secondly, to improve living conditions for women. 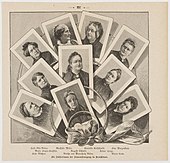 “Leaders of the women's movement”,
illustration from Die Gartenlaube , 1894
L. Otto-Peters is the first from the left in the top row.

Through her publications, Louise Otto had become a person noticed by the public, but also by the authorities. Her collection of poems, songs of a German girl , published in 1847 , earned her the name “Lerche des Völkerfrühlings ” because her verses were carried by the optimism of the Vormärz . This earned her recognition in democratic and working-class circles. She dedicated this collection of songs to the famous poet Alfred Meißner (1812–1885). In the same year "Vorwärts" was published by Robert Blum . Folk pocket book for the year 1847 ”a noteworthy article by Louise Otto“ On the participation of women in state life ”. Here she developed programmatic proposals for an organized “women's movement” with the demands: equality of men and women, access of girls and women to education. Further publications by her during the “Vormärz” can be found in the magazines “Constitutionelle Staatsbürger-Zeitung”, “Der Komet”, “Der Leuchtturm”, “Der Wandelstern”, “Neue Zeitschrift für Musik”, “Nord und Süd” , “Typographia”, “Our Planet”, “Violets, harmless leaves for modern criticism” and others. During her studies in Dresden, she had heard of the progressive Catholic preacher Johannes Ronge (1813–1887), whom she then visited on a trip to Silesia. When she met him, she was particularly impressed by the idea of ​​equal status for women in Catholic parishes, which even allowed women to be elected to church offices.

In 1848 her address to the highly esteemed Minister Oberlander in Dresden, in which Louise Otto demanded: “Gentlemen! In the name of morality, in the name of the fatherland, in the name of humanity, I urge you: do not forget women when organizing work! “It was about the appointment of a commission to work out proposals on economic policy issues in Saxony, in particular on the organization of work. She therefore also has to take care of the organization of women's work , among other things in order not to drive women into prostitution . Louise Otto's demand to nominate women for the workers' commission to be filled was seen as a scandal at the time . Nevertheless, they were asked for suggestions on this matter. She organized meetings to clarify the situation of the workers, was a co-founder of a fatherland association and was in lively exchange with the workers, who were increasingly organizing themselves.

During the March Revolution in 1849 she was the publisher of the women's newspaper she founded under the motto “I will recruit women for the realm of freedom!”. This intensified the attention of the Saxon censorship authority. This was followed by house searches, interrogations, the dissolution of the servants 'and workers' associations that she co-founded based on the Prussian Association Act of 1851, and the women's newspaper was banned in 1850 due to a specially amended Saxon press law ( Lex Otto ) that prohibited women from publishing newspapers. She evaded with the editorial staff to Gera before a final ban was imposed in 1852 by a similar Russian law.

She became engaged in prison to the writer August Peters , who had to serve seven years in prison as a participant in the revolutionary struggles of 1848/49. After the remainder of his sentence was waived in 1856, the wedding took place on November 24, 1858. After that, the couple lived in Leipzig from 1859 . She worked in libraries in Dresden and Leipzig, wrote articles, reviews and novels and edited the Mitteldeutsche Volkszeitung with her husband until his death in 1864 , of which she was the head of the feature section . Among other things, she wrote the text of the opera Theodor Körner , which the composer Wendelin Weißheimer had composed especially for the 50th anniversary of the Battle of Nations near Leipzig .

In 1865 Louise Otto-Peters founded the Leipzig Women's Education Association together with Auguste Schmidt , Ottilie von Steyber and Henriette Goldschmidt , and in the same year called the first German women's conference in Leipzig. She was also a co-founder of the General German Women's Association (ADF), which she led as its first chairman for the next three decades. The main goals of the association were: the right of women to education, the right to gainful employment for women and access to university courses. She also worked on the editorial team of the club newspaper Neue Bahnen . The moderately feminist magazine Der Frauenanwalt that developed from this was later to be continued by Elsbeth Krukenberg-Conze . As co-editor, she was primarily in contact with August Bebel (1840–1913), Julius Mühlfeld and Ludwig Eckardt (1827–1871).

She made suggestions to address female workers not only as a target group for charitable and educational work, but also as supporters for women's rights . The General German Women's Association ran, among other things, a “Sunday School”, a training school for girls and a dining establishment and organized entertainment evenings for women. At the philosophy congress in Frankfurt / Main in 1869, she represented the association with a speech of her own in order to reach even more public and actors for women's rights. Her last public appearance was in 1894 on the occasion of the opening of the first high school course for women and girls in Leipzig.

Louise Otto-Peters died on March 13, 1895 in Leipzig. She was buried in the New Johannisfriedhof in Leipzig.

Since 2015, the City of Leipzig has awarded the Louise Otto Peters Prize annually in October to people and organizations who are particularly committed to promoting equality between women and men.

In January 2018 in the Berlin district of Marzahn NordWest, a new way of combining counseling, meeting and self-help opportunities for and with women was created with the neighbors' meeting place "Louise" in Ahrensfelder Chaussee 140A. Funded by the Berlin Senate and the Marzahn-Hellersdorf district , the non-profit association Kiek In and the gGmbH of the same name set up a new offer for women and families in Marzahn-Northwest, the name of which was inspired by Louise Otto-Peters and her work.

Since 2019, the State Women's Council of Saxony in Peters' hometown Meißen has been commemorating the women's rights activist and publicist with one of the “women's places”; there is also a plaque for them.

Luise Otto-Peters in novels and films

In 1954 the writer Hedda Zinner published the biographical novel "Nur eine Frau" about Luise Otto-Peters. Four years later, the film of the same name based on it came into the cinemas as a DEFA production.

“I now have a goal, a purpose in life: a literary career. I don't strive for fame and honor, but for influence on the whole. "

“I looked horrified into an abyss. Long before I heard and read anything about socialism and communism, I asked the question: why would some have to live in ignorance, poverty and deprivation and others should despise them for it, and even increase their own mammon from their work. "

"The participation of women in the interests of the state is not only a right, it is a duty of women."

"Where you mean the people, the women don't count."

“It is another matter to have a say in the urge for action and storm of a turbulent time, to thirst for the deed - or to continue to work restlessly with tied hands in slavery for a short time - and at least to clink the chains that cannot be loosened. This is now the task of our newspaper. "

"The main thing, however, is first of all: from the fact that women are not only entitled, but also obliged to earn their own living, to make a generally recognized principle, all circumstances will and must be regulated accordingly." 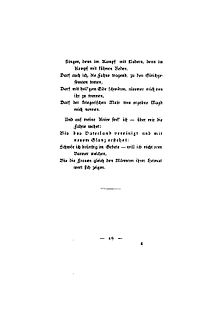 to the literary work

on the role in the women's movement