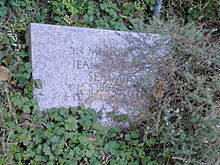 Jeanne Berta Semmig, daughter of the 1849 revolutionary , teacher and writer Friedrich Herman Semmig (1820–1897) and the French woman Adèle Cornichon was born in Orléans , France. After the outbreak of the Franco-Prussian War, the family moved to Leipzig due to an expulsion order in 1871 , where Semmig went to school. The first years of life of the daughter Jeanne Berta are recorded in the father's probably best poetic work Child , which the latter published in 1876.

From 1883 to 1886 she attended a seminar for teachers in Callnberg in the Ore Mountains and was then tutor in the family of the Altenburg master of the Minckwitz family . In 1891 Semmig became a teacher at the 6th district school in Dresden's old town for the next 40 years . Despite offers to change to community schools, she could “not leave the children of the people”.

In addition to her work, she wrote poems, which were first published in 1897 in the poetry book Poems . This was followed by stories and novellas in which she processed not only the experiences from her professional activity but also the impressions of her travels through Germany and Switzerland . Her works were published in Leipzig, Berlin, Dresden and Munich, even if the literary business took little notice of her.

Jeanne Berta Semmig met Hermann Hesse on Lake Constance in 1907 , and from then on she had a lifelong friendship with him; Between 1917 and 1958 she wrote him a total of 127 letters and a card, which are kept in the Hesse archive. In 1930 she visited him at Casa Camuzzi in Montagnola . It was there that she met Ninon Dolbin , who would later become Hesse's third wife. Hesse dedicated the poem Fateful Days to Semmig in 1947 .

From 1909 Semmig was associated with the Dresden Literary Association , as well as the Wilhelm Raabe Circle founded in 1901 . Later she was president of the Literary Association of German Women , which was dissolved by the Gestapo on Advent 1944 . After her apartment was bombed out during the air raid on Dresden in 1945 , she found accommodation with friends. Still writing, she spent her days in Feierabendheim Altfriedstein in Radebeul- Niederlößnitz she in her poem nursing home immortalized:

"The mansion from long sunken days ..."

It was there in 1957 that she wrote the draft of the speech for Hesse's 80th birthday, which she was unable to give for health reasons.

In March 1958, Semmig, the “oldest living German writer”, received the Clara Zetkin Medal on the occasion of the official celebrations for International Women's Day in East Berlin as an award for her long life's work. Semmig died in Radebeul in 1958 and was buried in the Tolkewitz urn grove in Dresden.

There are portraits of the painters Paul Wilhelm and Heinz Drache von Semmig .

(With bibliography and timetable.)