Orléans [ ɔʁleɑ ] is a big city and a municipality (commune) in the Region Center-Val de Loire , France . The city on the Loire is a university and bishopric with an impressive cathedral and has 116,685 inhabitants (as of January 1, 2017). Orléans is the seat of the prefecture of the Loiret department .

The old town of Orléans lies on the north bank of the Loire at a height of approx. 112  m ; only later were the communities on the south bank added. The city is just under 130 km (driving distance) southwest of Paris . The climate is temperate; Rain (approx. 640 mm / year) falls over the year.

Especially in the 20th century, the city experienced sustained population growth due to incorporations and immigration from the rural area, which was affected by the mechanization of agriculture and thus unemployment.

While the city was a market and trade center when the Loire was still navigable , today it is an industrial city and a service metropolis with court and administrative facilities, shops, schools, universities, banks, insurance companies, health centers, hotels, restaurants, etc. Tourism plays an important role in economic life.

Orléans on the Loire

Existed in at the site of the present Orléans Celtic (- Gallic the place) Time Cenabum which to territorially carnutes belonged together with Autricum (now Chartres one of the main places of this Gallic tribe was).

The settlement was in the year 52 BC. Conquered by Caesar , who also gained control of the port on the Loire. The actual foundation took place during the reign of the Roman emperor Aurelian ; the name Orléans represents a phonetic development of the then place name Aurelianum . In the 4th century the ancient city was secured by the construction of a city wall. Walls of up to 10 m high and 3 m thick enclosed an approx. 600 m long and 400 m wide rectangle with an area of ​​25 ha. The center of the city was formed by the forum . The most important streets were the decumanus maximus , today's rue de Bourgogne , as well as the cardo maximus , today's rue de la Poterne and the rue Parisie . Outside the walled city were two necropolises and the amphitheater . In fact, in 451, under the leadership of Bishop Aignan and thanks to the city walls, it was possible to repel an attack by the Huns .

In Merovingian times, Orléans became an independent kingdom for a short time from 511 to 613 , and later became the capital of Neustria . The fact that several kings were elected and crowned here also testifies to the importance of the city in the Middle Ages: Charles the Bald (848); Robert II , called the Pious (987) and Ludwig VI. , called the thickness (1108). Later it was an administrative unit within a county .

In 1022 it came to the burning of several high scholars, including some canons of the Cathedral of Orléans, in the course of Orléans heresy . It is the first known cremation of the Christian Middle Ages.

In the years 1428 and 1429 the city was the last bastion of the French against the English in the Hundred Years War . On May 8th, she was freed from the siege under the leadership of Joan of Arc , who was nicknamed "Maid of Orléans" in this context .

The first city expansion in the west of the Gallo-Roman city in the 14th century was followed by two more: first in the 15th century east of the original city walls to protect the monastery of Saint Aignan, and at the beginning of the 16th century another, considerably more extensive, in the west and north.

From December 13, 1560 to January 31, 1561 the Estates General were assembled in Orléans . On January 28, 1562, the Edict of Orléans was issued, which granted the Huguenots amnesty and freedom of religion. During the First Huguenot War , the Reformed made the city their headquarters in 1562. In 1563 the Duke François von Guise besieged Orléans and was murdered in front of the city.

In the time of the Renaissance numerous stately town houses were built, which still adorn the cityscape today. In modern times, Orléans was the name of a branch of the Bourbons who came to the French throne with Louis-Philippe from 1830 to 1848.

From 1791 to 1792 Orleans was the seat of the National High Court , as the constitution of the kingdom required a sufficient distance from the capital Paris.

In 1825 the construction of the boulevard Rue Jeanne d'Arc began. It leads in a straight line from today's Place du Général de Gaulle to the east to the main portal of the cathedral. It could not be completed until 1840.

Orléans has been connected to Paris by a railway line since 1853.

In the Franco-Prussian War , after the Battle of Orléans on December 3rd and 4th, 1870, the city was occupied by German troops until the peace agreement.

During the occupation by German troops in World War II from 1940 to 1944, the city was an important garrison for units of the Wehrmacht . The German occupation, however, was preceded by a bombardment, which mainly fell victim to the western parts of the old town. After a fire that lasted three days, 13 hectares of the city lay in ruins. The Maison de Jeanne d'Arc and the Couvent des Minimes monastery , where the Loiret archives were stored, were also destroyed. The archive holdings were largely lost. Allied air raids caused further destruction on traffic routes (especially bridges and railway lines).

In 1959, a large part of the municipality of Saint-Cyr-en-Val was incorporated into Orléans. The satellite town of Orléans-La Source was established there in the following years , which today has almost 20,000 inhabitants and forms its own canton in terms of local politics (the canton Orléans-La Source ). The university , which was founded in 1961, is also located there.

The center of the old town is the Place du Martroi , on which an equestrian statue of Joan of Arc has been located since 1855 .

During her stay in Orléans in April and May 1429, Jeanne d'Arc lived in the house of Jacques Boucher, the treasurer of the Duke of Orléans. In 1909 the front was moved 2.50 m back so that the house was one with the neighboring buildings continuous street front forms. In 1940, the building was completely destroyed in the fires that broke out after German bombing raids. During the reconstruction - from 1961 - the condition of 1909 was restored. Today a museum is housed there. The story of the Maid of Orléans is reconstructed in models and a diorama and the liberation from the siege of Orléans on May 8, 1429 is shown.

The most famous attraction of Orléans is the mighty Cathédrale Sainte-Croix (Holy Cross Cathedral).

The cathedral has been through a lot of deep destruction. Orléans was a center of clashes between England and France during the Hundred Years War until it was liberated from May 5th to 8th 1429 by Joan of Arc, who later not only erected a monument to the city but also some of the cathedral's windows are dedicated. Every year on May 7th and 8th a festival is celebrated in memory of this glorious liberation.

Then, on the night of March 24, 1568, Huguenot troops destroyed the cathedral except for the 3rd and 4th yoke of the nave, so that extensive new construction was necessary, which began in 1601. In addition, there was the destruction of German and American troops in World War II.

The Hotel Cabu houses a small museum on the city's history and archeology.

The partnership with Treviso was temporarily suspended due to various anti-homosexual and racist statements by Giancarlo Gentilini, the mayor of Treviso, on December 18, 2007.

Orléans is a motorway junction: the A10 motorway , which connects Paris with Bordeaux, runs very close to the city. This is also where the A71 branches off, which leads to Clermont-Ferrand and then as the A75 to the Mediterranean. The A19 connects the A10 (Paris-Orléans) with the A6 (Paris-Auxerre-Beaune-Lyon) and A5 motorways .

The national roads are important parallels to the motorways and cross-connections:

Orléans was connected to the railway network at an early stage, namely in 1843, as the terminus of the Paris – Orléans line. However, a terminal station was created , which proved to be a hindrance when the network was further expanded. That is why a new Les-Aubrais-Orleans train station was built 10 years later in the municipality of Fleury-les-Aubrais . Many trains of the emerging long-distance connections z. B. Paris – Orléans – Tours and Paris – Orléans – Clermont-Ferrand no longer drove to Orléans, but left the original route after a stop in Fleury, circumnavigated the city of Orléans and thus saved the time-consuming headache at the terminus. Today (as of 2019) trains to Tours or St. Pierre-des-Corps and Bordeaux mostly run on the western LGV Atlantique, trains to Clermont-Ferrand to the east via Nevers. Most regional trains on the routes to Paris, Blois-Tours-Nantes, Vierzon-Châteauroux and Borges-Nevers now stop in Orléans, only a few trains to Toulouse and Tours stop only in Les-Aubrais-Orleans in Fleury-les-Aubrais .

The Aérotrain monorail air-cushion suspension railway , planned around 1970 , was not implemented. An 18 km long section was built as a test route north of Orléans. It was to become part of the Paris – Orléans route.

To this day, Orléans has no connection to high-speed traffic. The exception is a pair of TGV trains Brive-la-Gaillarde-Roissy, each with one stop per day in Fleury-les-Aubrais . 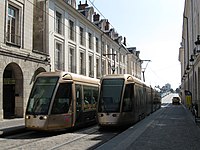 Local public transport in the territory of the municipal association is carried out by the company Transports de l'agglomération Orléanaise (with the abbreviation TAO). TAO employs over 700 people, including almost 500 bus and tram drivers. 220 buses are used, 60% of which are low-floor and run on more than 30 different lines, and 22 trams. The vehicles of the TAO put approx. 40,000 km back and serve 1280 stops (figures apply to 2009) The bus service ends in the early evening.

TAO tickets can also be used on the passenger trains between the train stations Orléans-Les Aubrais, Orléans, La Chapelle St-Mesmin and St-Cyr-en-Val. This offer is called the TER bus.

A tram line (Tram A) runs in a north-south direction. Line B in the west-east direction went into operation on February 29, 2012.

The University of Orléans is located in the suburb of Orléans-la-Source , which was built in 1959 and comprises the areas Lettres (humanities), Langues et Sciences Humaines (languages ​​and social sciences), Droit (law), Économie et Gestion (economics and management), Sciences ( Natural Sciences) and Sciences et Techniques des Activités Physiques et Sportives (STAPS) - sports science. The University of Orléans is also linked to the Institut universitaire de technologie (Institute for Technology) and the Institut d'administration des entreprises (Institute for Business Management ). Polytec Orléans Technical University, which was created in 2002 from the merger of two local engineering schools, is one of the three largest technical universities in France . 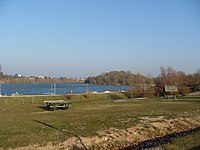 This park is located in the southernmost district of Orléans in Orléans-La Source. It was laid out from 1963, is 35 hectares in size and an international garden show took place here in 1967, which attracted around 2.3 million visitors in the course of that year. There are 101 types of trees, a greenhouse with exotic plants and a butterfly house. The center of the park is the karst spring of the Loiret . The Orléans University campus bordering the park was built in 1961 in part of the satellite city Quartier de la Source. The university management has moved into the Château de la Source near the source of the Loiret .

Despite the name, this 70 hectare area on the left bank of the Loire is only an island when the Loire floods. The stream (called "Rio") that separates the island from the mainland is more or less dry most of the time. The island belongs to the cadastral territory of the commune of Saint-Jean-le-Blanc . The city of Orléans has owned the property since the 1970s. A 33 hectare quarry pond has been prepared for all kinds of water sports. There is plenty of parking space for visitors, as well as cycling and hiking trails. In the summer months, a shuttle bus provides another connection to the city center.

Municipalities in the Arrondissement of Orléans