Beaugency is a commune in France with 7298 inhabitants (at January 1, 2017) in the department of Loiret in the region Center-Val de Loire .

Bridge over the Loire

The oldest surviving mention of Beaugency is found in a 12th century document as a fortified property ( châtellenie ) of the Counts of Blois . In 1292 it came to the French crown. In the Hundred Years War (1337-1453) Beaugency played an important strategic role: The city was occupied four times by the English, but was finally liberated by French troops under the leadership of Joan of Arc in the Battle of Beaugency (1429) . Then the manorial rule ( seigneurerie ) was transferred to the Duchy of Orléans via Beaugency . In the Huguenot Wars (1562–1598) the city was set on fire by the Protestants in 1567 and badly damaged. The triple city wall, the castle and the Notre-Dame church were particularly affected.

The Beaugency Bridge was already fiercely contested in the Franco-Prussian War of 1870/71. During the Second World War, the German Air Force bombed the city twice (1940 and 1944). On September 16, 1944, the German General Botho Henning Elster with 18,850 soldiers and 754 officers on the Loire Bridge formally surrendered to US General Robert C. Macon of the 83rd Infantry Division .

Due to the freight traffic on the Loire, Beaugency was an important trading town until the railway was built in 1846. Today it plays a role as the market and administrative center of its agricultural hinterland. Tourism has also become an important source of income.

A large number of structures in Beaugency are classified as Monuments historiques , including several townhouses ( hôtels ); other monuments are on a separate list. Most of Beaugency's attractions are on and near Place de Saint-Firmin . It is named after a church from the 16th century, of which only the tower that dominates the square remained after the French Revolution . In the middle of the square, a statue of Joan of Arc commemorates the liberation of the city in 1429.

Donjon near the Notre-Dame church 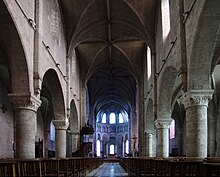 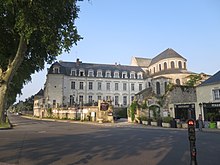 There is a town partnership ( Jumelage ) with Hiltrup , a district of Münster since 1975 .

Commons : Beaugency  - collection of images, videos and audio files
Municipalities in the Arrondissement of Orléans