Meanwhile, cities with more than 1 million inhabitants are as big city or metropolis and even bigger agglomerations sometimes as a megacity called. 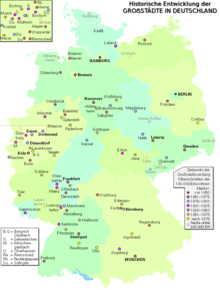 Currently (as of Dec. 31, 2018) there are 81 large cities in Germany , of which 30 (37%) are in North Rhine-Westphalia . Four are metropolises, another ten have more than half a million inhabitants. At the end of 2006 there were 82 major cities. Another ten cities in Germany (within today's borders) had more than 100,000 inhabitants at least once in the 20th or 21st century, so that there are a total of 90 cities that were or are once big cities.

In 2006, the then 82 German cities had a total of 25,449,822 inhabitants, which means that 30.9% of the total German population (as of December 31, 2006: 82,315,000 inhabitants) lived in cities with more than 100,000 inhabitants. 73 large cities are independent or urban districts . Major cities belonging to the district are Göttingen ( Lower Saxony ), Reutlingen ( Baden-Württemberg ), Recklinghausen , Bergisch Gladbach , Neuss , Paderborn and Moers (all North Rhine-Westphalia). With the exception of Moers ( Wesel district with seat in Wesel ), these cities are the seat of the respective district administration. Hanover (Lower Saxony), Aachen (North Rhine-Westphalia) and Saarbrücken (Saarland) are part of a special kind of local authority association .

Basel and Roche Tower (tallest building in Switzerland) in 2016